It is no surprise to this writer that Youtube’s recent censorship clampdown on material THEY don’t agree with was going to stir people, some vehemently.

We see it all around the internet how angry content creators and video bloggers are with #youtube. They are especially angry about the heavy handed, dictatorial and absolute manner in which youtube has simply cut their income potential to pennies and effectively leaving many of them destitute simply by demonetising their channels or even permanently deleting them.

While youtube may argue that those actions were initiated in response to complaints about someone breaching community standards appears to have some merit, on the surface anyway. But once you realise that any mean and angry troll can lodge a complaint with youtube and that most of youtube employed ‘moderators’ have been selected also on the basis of their political leanings and you realise what a seriously dangerous situation youtube has created for itself.

In addition, youtube further fuels the anger of people by NOT providing reasonable and timely dispute resolution options to the affected parties. You can count yourself lucky if you get an email reply at all from this technocracy behemoth.

So it comes as no surprise that someone would decide to retaliate. Of course many have, through blog posts and vlogs on other platforms and with the help af sympathetic website editors.

Most would have expected that such extreme retaliation would in the first instance come from some gun toting, extreme right wing nationalist  but hey, it appears the left also has its own extreme activists. That such would be a pro vegan, animal rights activist is a real pity until we realise that some of those are just as extreme as their right wing pro hunting comrades for example.

So it saddens me that the very first of Google’s chickens to come home to roost was in fact a vegan animal and fitness activist, who also happens to be a national of a country that is on the US’ official ‘candidates for regime change’ list. The plot thickens.

But before we stray too far of the topic here, lets have a look at the article penned by well known colleague warrior Mike Adams, although I must stress here that all opinions expressed are Mike’s alone and do not necessarily reflect the opinions and values of this warrior editor.

(Natural News) Liberal heads are exploding tonight as bizarre facts are now emerging about the YouTube shooter who opened fire, wounding three YouTube employees and killing herself in an attempted murder-suicide. The shooter has now been identified, according to multiple media sources. She’s a 38-year-old left-wing Farsi-speaking vegan animal rights protester named Nasim Aghdam, and she railed against YouTube for demonetizing and censoring her.

She said in a 2017 video that, “There is not equal growth opportunity on You Tube,” further explaining that she was being “discriminated and filtered” by YouTube in a way that sharply reduced the views of her videos. “They also attacked my Persian channel, Nasima Sabz,” she said in the video.

Her website, NasimeSabz.com, which uses a stage name instead of her real name, rails against YouTube censorship, saying, “Youtube filtered my channels to keep them from getting views!” She writes, above one of her banned videos, “This video got age restricted after new close-minded youtube employees, got control of my farsi youtube channel last year 2016 & began filtering my videos to reduce views & suppress & discaurage me from making videos!” 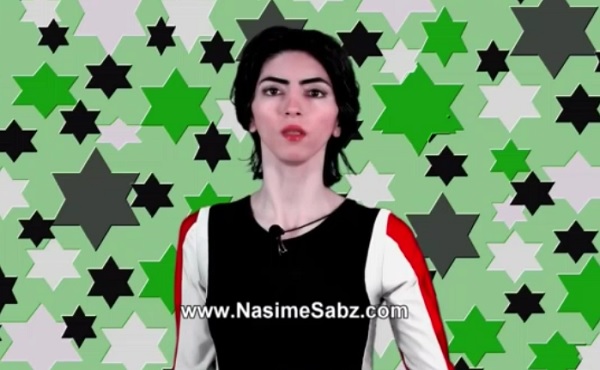 In this screen grab from her webpage, she reveals how YouTube systematically “deplatformed” her videos, causing her to lose revenues and audience: 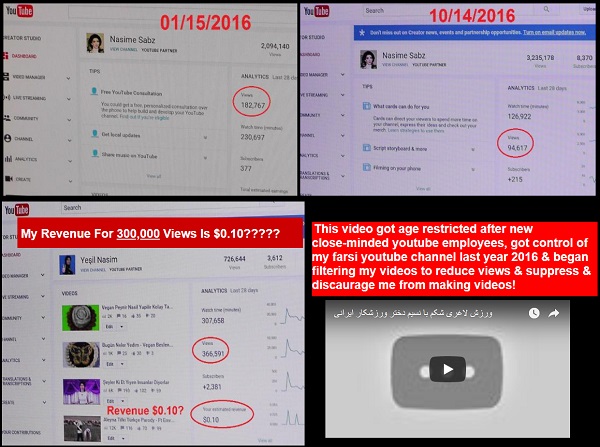 “Nasime” had several channels, including a “YouTube Farsi” channel, a “hand art” channel and an “Instagram Vegan Page.”

Her Instagram page is called “Vegan Nasim” and uses both English and Farsi:

On her website, she describes herself as creating the first vegan TV commercial in Farsi, in 2010:

In a warning against totalitarians posted on her site, she writes that, “There is no free speech in real world & you will be suppressed for telling the truth that is not supported by the system.” It’s hard to argue with that point, at least. There’s no question she absolutely correct in this particular description: 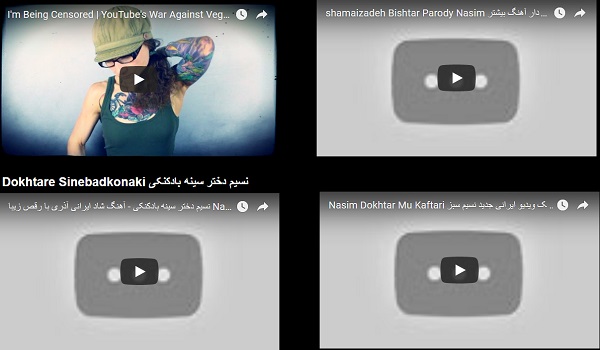 “Nasime” was heavy into veganism and vegan cuisine:

She was also into “auras” and fitness, priding herself on creating many videos without the help of anyone else:

Also on her home page, she shows several photos depicting herself in fashion clothing or with exotic animals: 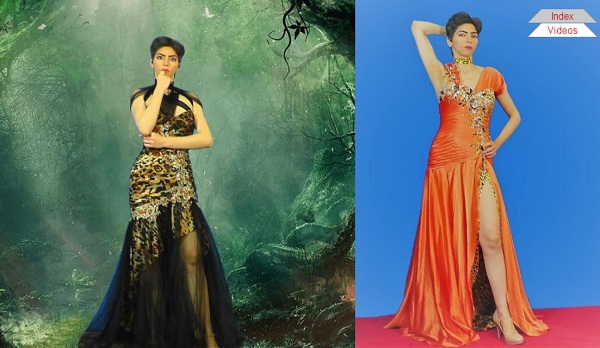 This convergence of themes — guns, YouTube censorship, female shooters, veganism and a Persian name — is likely making liberals’ heads spin, trying to figure out which fake news narrative to push on all this. It’s kind of hard to blame “rednecks” and NRA members for this shooting, although they will surely try.

Personally, I’ve never seen anything so bizarre in all my years of reporting. Can you make sense of any of this?

As far as I know, this is the first example of someone being censored by YouTube, then actively shooting YouTube employees as a form of revenge. I doubt, however, it will be the last, as YouTube seems to be engaged in some pretty heinous censorship tactics against all sorts of people who mostly just wanted a peaceful, non-violent platform for self-expression. Apparently, “deplatforming” some people drives them over the edge and makes them snap. YouTube may want to start thinking about how to stop pissing people off, especially when you have armed Farsi vegans on the prowl… 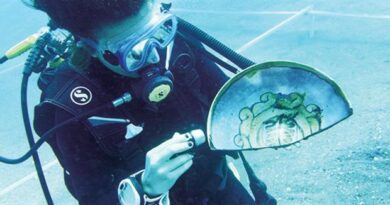