A Daily Dose of Turmeric Boosts Your Memory and Improves Mood 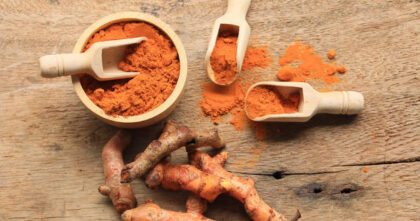 This post was shared from the barefootwarrior.org's RSS feed

5000 years of documented medicinal use of Turmeric and yet #BigPharma has been fighting tooth and nail to prevent the secret of #Curcumin from leaking out and taking a firm hold of the people’s imagination.

There can be only one reason why BigPharma would behave so contrary to the interests of patients, our health and the people: Profit. Profit made on 100’s of #patented #pharmaceuticals. Pharmaceuticals that have been developed just in the last 150 years, mostly from #petroleum products, by massive #corporations.

While the corporation’s primary goal is to generate dividends for (a small group of) shareholders, it would come as no surprise that the interests of patients would  be delegated to a distant 2nd place.

But things are changing fast and more and more establishment sources all over the world now discuss Turmeric as a possible treatment for a variety of diseases as is also evident from the articles and publications referenced in this search on the UK National Health Service database. Many more references in the article below.

Are we witnessing the steady break-up of BigPharma’s stranglehold and monopoly over our health and the treatments available to us? This writer certainly thinks so.

A new study sheds light on the powerful #neuroprotective properties of curcumin, the active ingredient in everyone’s favorite yellow spice. A twice-daily dose of this natural supplement led to a nearly 30% improvement in memory and a boost in mood for adults suffering from mild memory loss

It has become commonly accepted that the bright yellow spice, turmeric. is one of the world’s most potent medicinal plants. Championed by sports and fitness enthusiasts for its anti-inflammatory properties, stories abound of athletes making the switch from post-workout pain-relievers to daily curcumin supplementation—allowing them to avoid countless negative side effects of NSAIDs. Curcumin, the main active ingredient in turmeric, is responsible for its bold, yellow hue. A powerful antioxidant, curcumin is one of several compounds called #curcuminoids that possess potent medicinal properties. These biologically active #micronutrients do more than ward-off #inflammation; they have been studied for their role in the prevention of degenerative diseases such as #cancer, #cardiovascular diseases, and #dementia.

When it comes to supplementation, curcumin is not without its detractors. Taken in isolation, curcumin has reduced bioavailability and becomes destabilized.[1] Taken as a whole-food in either fresh turmeric root or ground spice, the full-range of beneficial properties of this miracle plant are conveyed. Research is building into the wide range of uses, as well as optimal dosage and formulation of turmeric to enhance health and increase longevity. Thanks to these efforts, mainstream acceptance of the medicinal uses of turmeric continues to grow.

Early in 2018, researchers at UCLA published findings in the American Journal of Geriatric Psychiatry, related to the effect of curcumin supplementation on memory performance. Also explored in this study was curcumin’s potential to positively impact the microscopic plaques and tangles in the brains of people with Alzheimer’s disease. Forty study subjects were selected from adults, aged 50 – 90 years, with mild memory complaints but otherwise normal brains. Participants were randomly assigned to either a placebo group receiving a sugar pill, or control group receiving 90 milligrams of curcumin twice daily for eighteen months. Curcumin levels in the blood were measured at the start and the end of the trial. Cognitive tests were administered pre-study, and repeatedly at six-month intervals until completion at eighteen months.

At the end of the study period, all collected data was analyzed. Researchers found that people in the group receiving daily curcumin supplementation experienced nearly 30% improvement on memory tests and had brain PET scans which showed improved signaling in the amygdala and hypothalamus regions of the brain, areas that control memory and emotional functions. The curcumin test group also had significant improvements in their attention span. Finally, the curcumin group reported mild mood improvement. Participants in the control group did not experience these benefits.

The study’s lead author, Dr. Gary Small, director of geriatric psychiatry at UCLA’s Longevity Center and at the Semel Institute for Neuroscience and Human Behavior at UCLA, had this to say about results: “Exactly how curcumin exerts its effects is not certain, but it may be due to its ability to reduce brain inﬂammation, which has been linked to both Alzheimer’s disease and major depression.” The only side effects reported by either group were mild abdominal pain and nausea. “These results suggest that taking this relatively safe form of curcumin could provide meaningful cognitive benefits over the years,” said Small. Follow-up studies are planned to explore whether curcumin’s antidepressant effects may help people suffering from mild depressive disorders, as well as whether curcumin’s memory-enhancing effects vary according to people’s genetic risk for Alzheimer’s, their age, or the extent of their cognitive problems.

At GreenMedInfo, we’ve reported extensively on how curcumin can help the aging brain. In a 2014 animal study, adult rodents were supplemented with daily curcumin, and after one month, researchers observed a ‘remarkable restoration’ of the ability of their blood vessels to naturally relax. They observed three distinct ‘molecular’ ameliorative effects: improved blood vessel dilation, which reduces cardiovascular risk factors such as hypertension and associated damage to the arteries; improved mitochondrial functioning, associated with increased lifespan; and reduction in ROS production (Reactive Oxygen Species), associated with decreased oxidative stress and related cellular damage. These powerful brain benefits may help explain why turmeric produces such remarkable recovery in the brains of Alzheimer’s patients.

Curcumin’s amazing brain benefits have even been found to ameliorate the damaging effects of fluoride on the brain. A known neurotoxin, fluoride finds its way into our diet in a variety of ways: the tap water that we use to cook or bathe, Teflon and aluminumcookware, non-organic foods, pharmaceutical drugs, and commercial beverages, to name only a few. High levels of fluoride in the body have been linked to cancers, tooth decay, bone diseases, and other problems.[2] A 2014 study on the effects of curcumin on fluoride levels in the body showed that when fluoride was given to test subjects (a single daily single dose of 120 ppm), their brains experienced “highly significant increases in LPO [lipid peroxidation, i.e. brain rancidity] as well as neurodegenerative changes in neuron cell bodies of selected hippocampal regions.” Test subjects who were given curcumin supplementation (30 mg per kg of body weight) had a significantly reduced toxic effect from fluoride, with fluoride levels in the blood testing at near-normal levels. Researchers believe that the antioxidant properties of curcumin play a “therapeutic role against oxidative stress-mediated neurodegeneration.”

Need more reasons to add this wonderful spice to your life? Learn more about turmeric’s brain-enhancing properties, GreenMedInfo has hundreds of articles that show how effectively turmeric protects the brain, as well as more than 2500 abstracts on turmeric research. GreenMedInfo’s curcumin research is another great resource. The GMI Research Group (GMIRG) is dedicated to investigating the most important health and environmental issues of the day.  Special emphasis will be placed on environmental health.  Our focused and deep research will explore the many ways in which the present condition of the human body directly reflects the true state of the ambient environment.