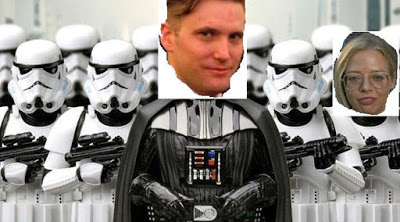 
Darth-Vader-Wannabe Richard Spencer derides Universal Nationalism at 2:25:10 in the video below:

Spencer says he believes in Power, and the name of the game is to be more ruthless than one’s enemies/rivals and WIN. He says Omni-Nationalism(his term for Universal Nationalism) is stupid and terrible. He says it’s ahistorical. He says History is all about the Power. The Power is greater than the Truth. He says he rejects nationalism, independence, and sovereignty for Other Races. He thinks the Aryan Race, being a conquering and wandering global people, must destroy and dominate all the world. He says he respects Neocons because they have global ambition. His rejection of Neocon-ism isn’t moral but racial-political, i.e. he wishes his race, the Aryans, were doing what the Neocons are doing: Turning the world upside down and destroying countless lives to gain hegemony, domination, and supremacy. His attack on ‘omni-nationalism’ is clearly an attack on people like Ramzpaul and Greg Johnson, even Jared Taylor and Kevin MacDonald, who’ve clearly stated that they reject White Supremacism and merely hope that white people will thrive in their own homelands. According to Spencer, it’s all about the Will and Power. I guess he didn’t learn from World

Gazillion Miles Behind the Curve, the Fed Gets Hawkish: More Rate Hikes, “Faster and Much Sooner” Quantitative Tightening