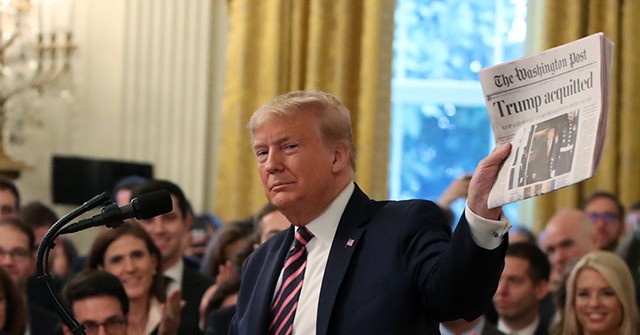 President Donald Trump delivered a speech to the nation Thursday celebrating his impeachment trial acquittal the day before, blasting the process as “crooked” and thanking the “incredible warriors” who sided with him during the ordeal.

Trump described the event as a celebration of another victory over the “evil” forces allied against him.

“Today is the day to celebrate these great warriors, right?” Trump said. “These are great warriors. They really fought hard for us.”
The president’s address was populated with Cabinet members and staffers, as well as activists and allies.

“We’ve all been through a lot together,” said Trump thanking his supporters who gave him a standing ovation as he entered the room.

“We went through hell, unfairly,” Trump said, repeating that he did “nothing wrong” to deserve impeachment.

Trump’s legal team was also present and got a standing ovation. “Great job,” he told them.

“I call them friends because you develop friendships and relationships when you’re in battle and war,” Trump said, praising the “incredible warriors” in the room.

“Mitch McConnell, I want to tell you, you did a fantastic job,” he said, praising the Senate Majority Leader for outsmarting his opposition.

“This guy is great,” Trump said. “He’s a tough guy to read… that’s what makes him good.”

“There were some who used religion as a crutch,” Trump said, mocking “failed presidential candidate” Sen. Mitt Romney.