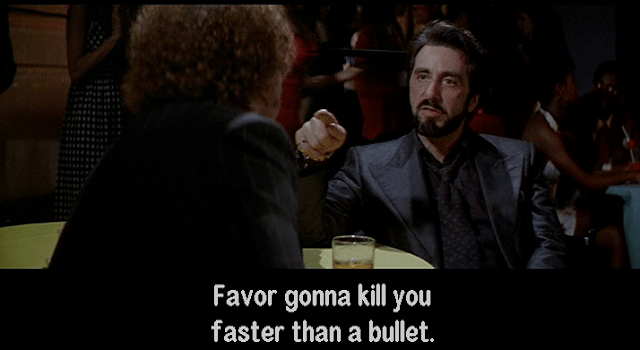 Note: CARLITO’S WAY is the closest thing to a Passion Play in the Gangster genre. If ever a gangster movie was made for the Easter Season, this is it. No wonder it was voted by the French film journal Cahier du Cinema as the best film of the 1990s. Though France has long been secular, a certain Catholicist mindset continues to permeate throughout the culture. (The French Revolution sought to turn Paris into the secular Vatican of World Salvation.) As cinema could be said to be the New Religion of France, it is through movies that the French get anything like ‘religion’. Imagine Howard Hawks and Alfred Hitchcock with a bit of Robert Bresson, and you have De Palma’s second gangster movie, possibly his best work. (He seems to think so.) All the Christian themes and motifs are interwoven throughout the movie. Carlito, sentenced to thirty years, is sprung to new life. He is like Lazarus or Jesus resurrected. He dreams of another world, a kind of heaven in Bahamas far away from the world of crime he’d known all his life. Carlito and Gail, pregnant with his child, are like Joseph and Mary seeking escape and

Mopping up Mess from SPAC Mania: After Imploding, Shift Technologies (-92%) and CarLotz (-95%) Merge into One Zombie to Burn Remaining Cash Together