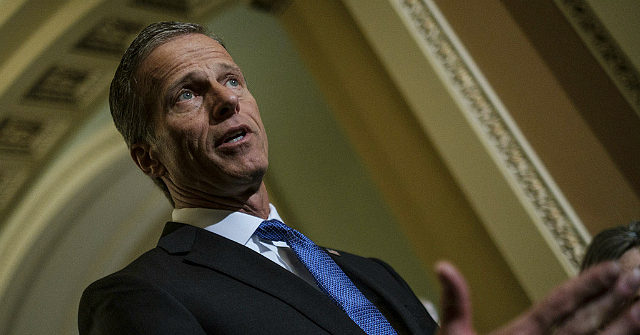 Judy Woodruff asked, “Are you comfortable with the idea of law enforcement using force as we saw on video to clear out protesters and journalists out of the area so the president can walk a block over to the church?”

Thune said, “Well, I would prefer that if people were protesting peacefully that they be allowed to continue to do that. That’s what we want to encourage. Now, my understanding is there was a curfew being imposed at 7:00 and people were starting to disperse anyway, but for sure if people are following the law, exercising their First Amendment rights to assemble and to make their voices heard in a peaceful way, they should be allowed to do that. So there are questions about the circumstances down there last night, but I think as a general rule, yes, people who are protesting peacefully ought to be allowed to do that. That’s certainly the kind of thing we want to encourage.”

On Trump speaking to the nation, Thune said, “I think that the country, Judy, is looking for healing. They’re looking for a calm voice, a reassuring voice. I think that’s the tone right now that the president needs to project. And sometimes, too often, when he resorts to his Twitter account, he doesn’t always reflect that tone. But I think that right now the thing that we ought to see, I hope you can see more of out of the president is an appreciation for the frustration, the anger, the anxiety that people are feeling, observing these events around the country, and just being willing to listen. I think more than anything else right now, people want to have their voices heard. I think the president in a compassionate way, in a way that reflects humility and respect, should listen to people at a time like this. So I hope we see more of that out of him and out of his team in the days ahead.”