Joel Pollak to Dennis Prager: ‘Media Would Destroy Black America if It Would Get Rid of Donald Trump’ 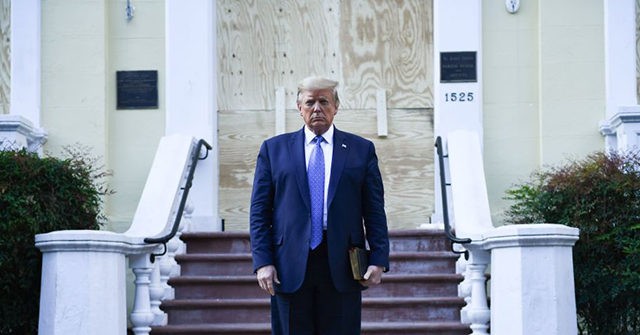 “The media would destroy black America if it would get rid of Donald Trump,” said Breitbart News Senior Editor-at-Large Joel B. Pollak, offering his comments in an interview with Dennis Prager on Thursday during the latter’s eponymous radio show.

Left-wing and Democrat-aligned news media view and use ongoing unrest as a political weapon against President Donald Trump, assessed Pollak.

“This is, in many ways, a test of wills,” said Pollak of conflict between some news media and Trump. “The media [have] tried and failed to get rid of Donald Trump any other way. They used impeachment, then they used the coronavirus, and now they’re using this. I’m not saying that coronavirus isn’t a real problem. I’m not even saying that racism in the police force or America isn’t a real problem, but they’re elevating it to such a hysterical and self-destructive level.”

Pollak continued, “Black America was at its best earlier this year, [with] the lowest level of poverty [and] highest level of employment. The media would destroy black America if it would get rid of Donald Trump. That’s what we’re seeing. It’s a test of wills, though, and I think people just need to know that beyond the headlines and the news, a lot of Americans are looking at this as the absurdity it is.”

“Although people are fearful right now both in a physical and social sense, many Americans still believe in the United States [and] in Martin Luther King,” added Pollak.

Pollak remarked, “Our media are enjoying the spectacle of disorder.” Socialists enjoy “the insurrectionary movement,” he added.

“If you told me last week that coronavirus would be off the front pages, I wouldn’t have believed it, and yet here we are,” Pollak remarked. “But the media are telling us a completely different story about what’s actually happening in the country. There was a poll that came out early this week that was quickly forgotten by the media that showed three out of four Americans — including a majority of Democrats — approved of using the National Guard to quell the riots around the country.”

Pollak went on, “That is not reflected in our national media, and [there is a] seething anger and frustration and confusion among most Americans watching CNN and NBC and the New York Times praise these protesters.”

Prager praised Breitbart News as “a very important website” that operates as counterweight to widespread mendacity across the news media.

“Breitbart.com is smeared constantly by the left, but there’s more truth at Breitbart on any given day than at CNN a year,” Prager said. “I do read [Breitbart News] every day.”

“People can’t live their ordinary lives,” said Pollak of “peaceful protests.” “There’s been a real confusion in the media about these terms ‘peaceful’ and ‘peaceful protests,’ but there’s a difference between peaceful and lawful.”

Pollak continued, “People have the right to freedom of speech and freedom of assembly, but everybody has that right. That’s why you can’t just block traffic whenever you want to. That’s why we have [organizers of] demonstrations applying for permits. It’s for public safety. It’s so you don’t overrun people when they’re exercising their rights.”

“These quote-unquote ‘peaceful protests’ diverted the police,” Pollak noted. “The police were patrolling the protests on Ocean Boulevard while the looters were emptying out Santa Monica Place.”

“In our liberal city [of] Los Angeles, Eric Garcetti is cutting the police budget by $150 million,” Pollak said. “He’s kowtowing to these people who show up at protests with signs that say, ‘Defund The Police.’”

Pollak went on, “There’s nothing worse for black communities and communities of color. This makes them less safe, because no one’s going to invest in those communities if they can’t feel safe and secure. I don’t think liberal America — and certainly I don’t think our media — realize what this has done.”

Pollak lamented, “This is the worst thing I’ve seen in my lifetime. I’ve never seen anything like this. It’s not just a destruction. It’s that they wrap it up in the language of social justice.”

“PragerU is so important, because the college campus is now our reality,” Pollak remarked. “What you were fighting on campus a few years ago is now everywhere [with] cry-bullies who talk about their pain while the looters are destroying lives and setting fire to minority-owned businesses.”

“[Los Angeles Mayor Garcetti] gave a speech where he said he understood the pain of black Americans, because it hurts from the good day you’re born,” Pollak recalled. “There’s this concept they have called ‘generational trauma.’ It’s so completely ridiculous, but it’s racist, too. It’s saying, essentially, that being born black is some kind of sentence and some sort of punishment. This is held up as the highest form of enlightened liberalism.”

Pollak remarked, “What does Black Lives Matter say? It says that ‘white privilege’ is the problem, which means that white people become the most important people in fixing the problem. So it takes away black agency, and makes liberals like Eric Garcetti — who can go home and enjoy private security —  talk greatly about themselves. They’re safe and secure while black communities have less police patrolling.”

Pollak’s latest book, Red November: Will the Country Vote Red for Trump or Red for Socialism?, will be released on July 14.