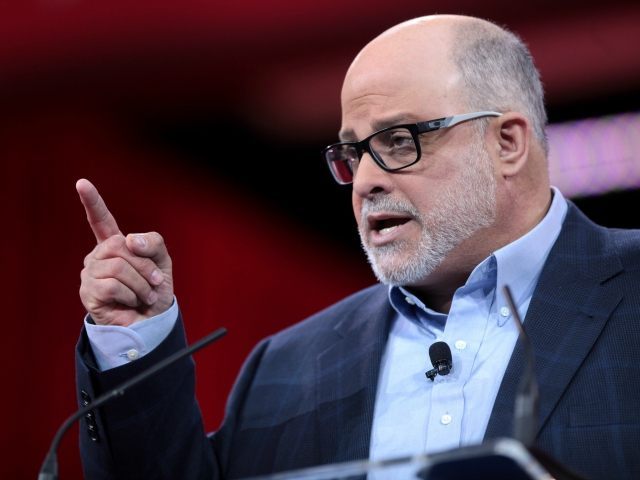 Conservative radio host and litigator Mark Levin urged President Donald Trump to allow Israel to proceed with the terms of the peace plan he unveiled earlier this year, and stop “dithering” that allows opposition to the plan to build.

Under the terms of the plan, Israel can extend its law to Jewish settlements in Judea and Samaria — that is, to annex them — and to claim sovereignty over the Jordan Valley. The Palestinians are granted a demilitarized state on the remaining land, plus $50 billion, if they renounce terror. Jerusalem remains in Israeli hands, though Palestinians are given a capital in eastern Jerusalem. The Palestinians have four years to accept the deal; if they do not, Israel can draw its own borders.

With Benjamin Netanyahu’s victory in Israel’s March elections, cemented in a unity government, and an unpredictable U.S. election approaching in November, there is a brief window of time in which Netanyahu can implement the plan.

But the Trump administration has been advising Israel to proceed with caution. Levin says: the time for waiting is over.

I am growing increasingly concerned about the equivocation by the administration, based on pressure from the Arab states, EU, and UN, and the changing bar.

If you’ve been following news reports since January, first the bar was set at waiting for the Israeli election to determine who the prime minister would be. Well, that’s done and the prime minister is Benjamin Netanyahu. And he is more popular now than he was even several months ago. Furthermore, he campaigned on executing the peace deal and right-of-return. Israel is an independent country, an election was held, and Netanyahu and his policies prevailed. However, now the Arab states and the EU, among others, are objecting to the deal and insisting it be abandoned. And the Democrat Party in our country, including [Joe] Biden, [Nancy] Pelosi, and several senators and congressmen, are objecting. This is what happens when rather than proceeding, there’s dithering and wobbling.

If our country did not want to adhere to the spirit, intent, and goals in the peace deal, then why agree to them in the first place? It is time to act. It won’t get easier. Indeed, it’ll get more difficult. But as we know, great leaders become historic leaders when they do great and historic things — which, in this case, are also morally and politically right.

President Donald Trump initially delayed fulfilling his promise to move the U.S. embassy in Israel to Jerusalem, under pressure from abroad and from the foreign policy establishment in Washington, DC.

But by the end of 2017, he moved ahead — and none of the predicted bad consequences (including terror and boycotts) materialized.