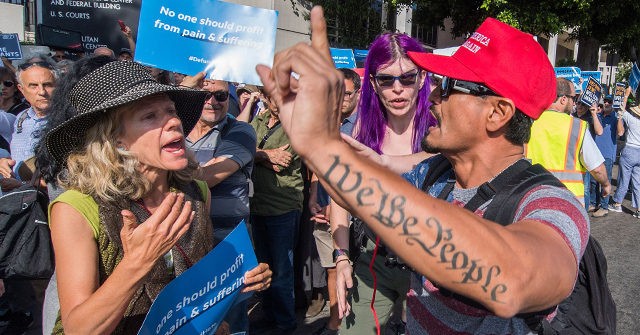 One in three voters believes that the United States is could face another civil war soon, as unrest rages across the country over issues of race, policing, and the upcoming presidential election.

A Rasmussen Reports poll released Monday reveals that 34 percent of likely U.S. voters think the United States will experience a second civil war sometime in the next five years, but that includes only nine percent who say it is “very likely.”

“This compares to 31 percent and 11 percent respectively two years ago,” Rasmussen reported.

When divided by party, 40 percent of Republicans said a second civil war was “on the horizon,” while 28 percent of Democrats said the same. Among voters not affiliated with either party, 38 percent see the possibility of a civil war.

Thirty-nine percent (39 percent) of all voters believe the removal of Confederate symbols, names and monuments throughout the country honoring those who fought in the first civil war will help race relations. Twenty-seven percent (27 percent) disagree and think it will hurt race relations instead. These numbers are reversed from August 2017 when 28 percent said removal of the symbols would help race relations, while 39 percent thought it would hurt instead. Little changed is the 28 percent who think the removal of public traces of the Confederacy will have no impact.

Women and those under 40 are more supportive of the current anti-police protests and the anti-Confederacy drive than men and older voters. Younger voters worry most about another civil war. Just 29 percent of blacks believe the current protests will lead to long-term, meaningful racial change in America, compared to 35 percent of whites and 48 percent of other minority voters. Blacks (54 percent) are far more confident than whites (36 percent) and other minorities (40 percent), however, that the removal of Confederate symbols, names and monuments will help race relations.

Among voters who think the erasure of Confederate history hurts race relations, 50 percent believe a civil war is likely in the next five years.

According to a 2017 Rasmussen survey, most Americans do not think their peers know much about the nation’s history and have skeptical of school textbooks’ accuracy. Sixty-four percent of Democrats think getting rid of all traces of the Confederacy will help race relations, a view shared by only 19 percent of Republicans and 31 percent of unaffiliated voters.

“As recently as last November, 73 percent of American Adults said Americans should be proud of the history of the United States,” Rasmussen states. “But 32 percent of Democrats share New York Governor Andrew Cuomo’s view that ‘we’re not going to make America great again. It was never that great.’”

The survey of 1,000 likely voters was conducted between June 11 and 14. The margin of sampling error is plus or minus 3 percentage points, with a 95 percent level of confidence.