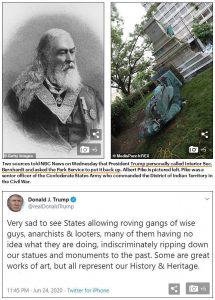 Yesterday, President Donald J. Trump personally ordered the statue of Albert Pike, the Confederate general,  Sovereign Grand Commander, and reformer of the Ancient and Accepted Scottish Rite to be put back up after Antifa and BLM protesters toppled and burned it last week. According to NBC News, the U.S. president has called interior secretary David Bernhardt and asked the Park Service to immediately restore the fallen monument of Albert Pike, a senior figure in the slave-holding south’s military forces.

The Albert Pike monument is the only outdoor one in Washington DC to commemorate a member of the confederacy, but there is much more to it for those who know the history of Freemasonry. The Albert Pike statue marks the location of the former headquarters of the previous Supreme Council building. The Ancient and Accepted Scottish Rite paid for this statue to be made and later donated to the U.S. Parks Service in 1901 for this purpose.

Most people will think the present leadership of the most practiced Masonic rite in the U.S. will be encouraging President Trump to save such an important symbol of their Rite, but in the Official Statement Concerning Pike Statue published a week ago by thepresent Sovereign Grand Commander James D. Cole, 33°,  there is only submission and calls of compliance towards Black Lifes Matter and Antifa, stating that “As Scottish Rite Masons, we prefer to step forward with our fellow citizens” hoping in typical libtard fashion that,“the removal of the statue can be at least a small step toward healing our nation’s wounds.”

THE COMING FLU SHOTS WILL BE DEADLY. YOU CAN COUNT ON IT. MRNA TECH IN EVERYTHING NOW. 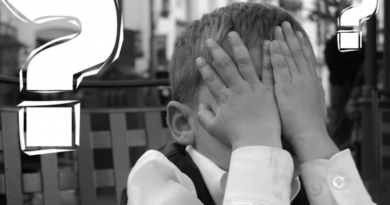 The Federal Reserve Just Made A Colossal Mistake