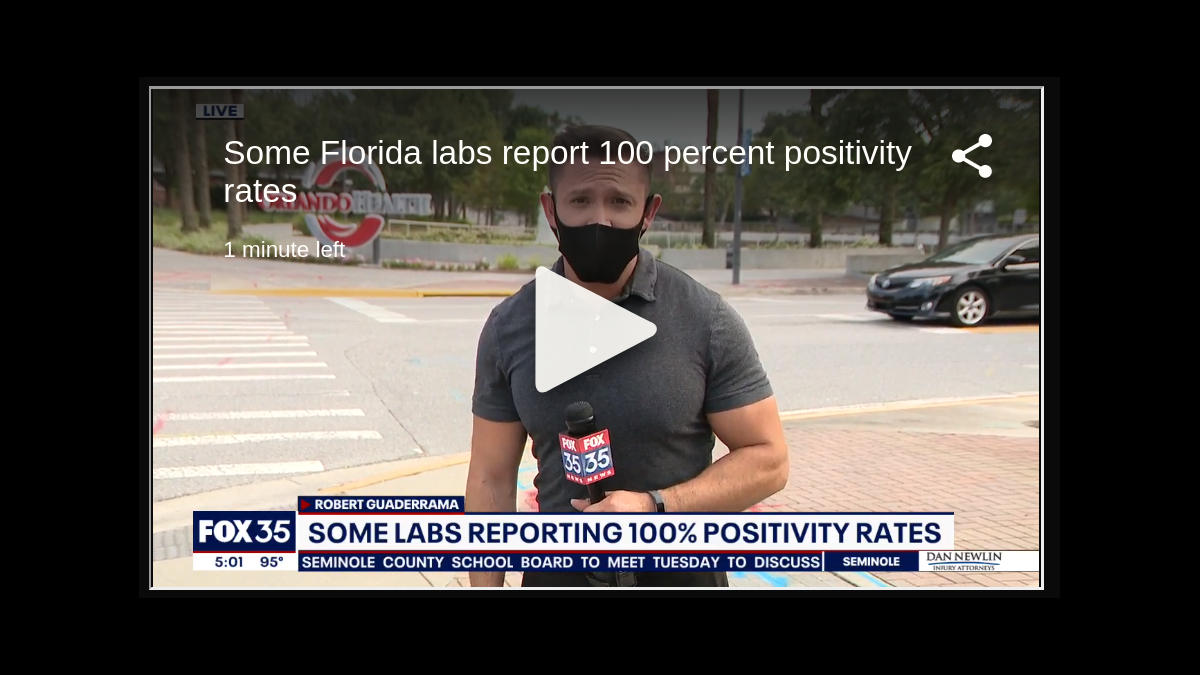 A FOX 35 investigation released on Monday discovered an inflation of coronavirus cases by the Florida Department of Health. The Sunshine State’s health authorities misreported the number of persons testing positive for coronavirus in its aggregation and publication of test results from laboratories.

FOX 35 anchor Charles Billi explained the impetus for the investigation. He said, “We found numerous labs that are only reporting positive test results, so they show a 100-percent positivity rate. That got our attention.”

The Florida Department of Health’s stated positivity rates and associated volume of coronavirus cases does not match claims made by the testing facilities, reported FOX 35:

Countless labs have reported a 100 percent positivity rate, which means every single person tested was positive. Other labs had very high positivity rates. FOX 35 found that testing sites like Centra Care reported that 83 people were tested and all tested positive. Then, NCF Diagnostics in Alachua reported 88 percent of tests were positive.

How could that be? FOX 35 News investigated these astronomical numbers, contacting every local location mentioned in the report.

“The report also showed that the Orlando Veteran’s Medical Center had a positivity rate of 76 percent,” added FOX 35. “A spokesperson for the VA told FOX 35 News on Tuesday that this does not reflect their numbers and that the positivity rate for the center is actually 6 percent.”

“FOX 35 News went on to speak with the Florida Department of Health on Tuesday. They confirmed that although private and public laboratories are required to report positive and negative results to the state immediately, some have not. Specifically, they said that some smaller, private labs were not reporting negative test result data to the state.”

FOX 35’s Robert Guaderrama is awaiting a response from state officials regarding the health department’s errors:

Florida has a statewide positivity rate of 12.5 percent, according to the state’s latest claims of 266,119 “confirmed cases” among Florida residents against a state population of nearly 21.5 million.

Economically-Free States Are Recovering Rapidly. High-Control States, Not So Much…

Special Restored Republic via a GCR Report as of April 15, 2022

Rally Fizzles As Futures Slide Ahead Of $3.5 Trillion OpEx