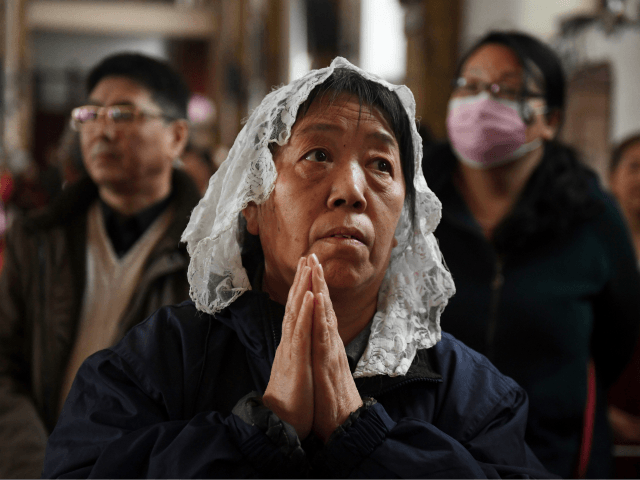 The economic downturn caused by the coronavirus pandemic has hit China’s low-income households hardest, many of which rely upon state-funded welfare benefits to survive. In recent months, the CCP has reportedly forced Christians across the country receiving state-funded welfare benefits to remove religious symbols from their households and replace them with images of Chinese President Xi Jinping and Mao Zedong; some are told to renounce their faith altogether. If Christians refuse, the state cancels their welfare payments, according to the magazine.

In April, the government of a town administered by Linfen, a city in northern Shanxi province, ordered officials from all local villages to “remove crosses, religious symbols, and images from the homes of people of [Christian] faith who receive social welfare payments and replace them with portraits of Chairman Mao and President Xi Jinping. The officials were instructed [by the CCP] to annul the subsidies to those who protest the order,” Bitter Winter reported.

Under the officially atheist Communist Party regime, China tolerates just a handful of religions, including Catholicism and “Christianity,” which the CCP refers to as the Patriotic Three-Self Church. Buddhism, Taoism, and Islam are also ostensibly allowed, though in practice the CCP discourages religious worship by creating hostile conditions for people of faith, especially Christians.

A Three-Self church member living in a Linfen-administered village during the CCP’s crackdown on Christians there in April told Bitter Winter that local officials visited his home and “tore down all religious couplets and a calendar with an image of Jesus … and posted a portrait of Mao Zedong instead.”

“Impoverished religious households can’t receive money from the state for nothing—they must obey the Communist Party for the money they receive,” the man recalls a CCP official telling him.

In the southeastern province of Jiangxi in April, the municipal government of Xinyu City “withdrew a disabled Christian [man’s] minimum living subsidy and a monthly disability allowance of 100 RMB (about $14),” according to the report.

“Officials told me that we would be treated as anti-Party elements if my husband and I continued attending [Christian] worship services,” the man’s wife told Bitter Winter.

In the central province of Henan’s Weihui City, a widowed, Christian single mother caring for two sons says the government canceled her welfare payment in April after a CCP official ordered her “to sign a statement renouncing her faith and destroy all Christian symbols in her house” and she refused to comply.

The Communist Party regime has long preyed upon impoverished Chinese Christians. In 2017, Breitbart News reported that the CCP threatened to withhold poverty relief packages from rural Christians if they failed to replace religious iconography in their homes and houses of worship with images of Communist Party leaders, such as Xi Jinping.

In addition, the CCP has used the ongoing coronavirus pandemic as an opportunity to shut down and even demolish Christian churches left empty by bans on large gatherings.

Lagarde Calls For Crypto Crackdown, Says They’re “Based On Nothing”

Polish, Czech & Slovenian Leaders Head To Kiev By Train In Show Of Support To Zelensky