Like other predatory corporate interests in the US and West, what Big Pharma wants, it gets — in cahoots with dark forces in the US and their Western junior partner states.

Americans are consistently lied to, deceived, and exploited by monied interests and political officials they control.

The SARS-Cov-2 virus that produces COVID-19 was made in the USA — a bioweapon spread domestically in the US and worldwide.

What’s been going on for months is part of a diabolical scheme to transfer unprecedented amounts of wealth from ordinary people to privileged interests — creating unparalleled human misery through manufactured economic collapse.

The scheme is also about increasing corporate power by eliminating competition.

Tens of thousands of small, medium-sized, and some large firms shut down and/or declared bankruptcy — many, maybe most, never to reopen, an unprecedented economic apocalypse in US history, unfolding with breathtaking speed.

Around one-third of working-age Americans are jobless — not the phony BLS 11%. Official  government data are fabricated.

For 19 straight weeks, new claims for unemployment benefits  exceeded Star Trek — at over one million weekly with likely more of the same ahead, numbers reported were far greater than ever imaginable before.

The worst of times continues with likely no end of it in prospect for perhaps years to come, accelerating America’s thirdworldization, transforming the country to resemble tinpot dictatorships.

There are no congressional programs in prospect to revive economic growth, no concern by US ruling authorities for the health and welfare of ordinary people, serving privileged interests exclusively.

Nationwide COVID-19 outbreaks and economic collapse are a diabolical planned in advance/devastating combination that ripped apart America’s social and economic fabric for the vast majority of its people to benefit a privileged few.

In cahoots with US dark forces, Big Pharma aims to cash in big by inoculating millions of Americans and others abroad with highly toxic/hazardous-to-human-health/fast-tracked coronavirus vaccines.

All vaccines are toxic and unsafe, time and again responsible for causing diseases they’re supposedly designed to prevent.

Instead of following vaccine development protocol, they’re cutting corners at the expense of safety and efficacy.

It’s virtually impossible to develop a vaccine in months as opposed to required years of testing — but that is precisely what’s unfolding in real time.

Anything rushed to mass production to cash in on billions of dollars of market potential will be especially hazardous and should be avoided.

“The key to defeating COVID-19 already exists.” See below.

Risch explained that he “authored over 300 peer-reviewed publications and currently hold senior positions on the editorial boards of several leading (scientific) journals.”

Many thousands of COVID-19 infected individuals “are dying unnecessarily,” he stressed, adding:

What’s going on “can be reversed easily and quickly” because a COVID-19 cure exists.

It’s called hydroxychloroquine (HCQ). When properly used and combined with either azithromycin or doxycycline and zinc, “it has been shown to be highly effective.”

HCQ has been around for decades. It’s widely available in generic form, cheap, and safe — in contrast to highly toxic and hazardous coronavirus vaccines, likely to be available in the coming months.

When HCQ “is given very early in the course of illness, before the virus has had time to multiply beyond control, it has shown to be highly effective, especially when given in combination with” one of the two antibiotic drugs mentioned above and zinc.

In the American Journal of Epidemiology (AJE) last May, Risch called for widespread use of HCQ “immediately,” saying it’s “key” to curbing and curing COVID-19.

He personally knows two doctors who “saved the lives of hundreds of patients with these medications.”

Shockingly, their licenses to practice and reputations are being challenged by state medical boards, what Risch called “completely without scientific merit.”

Numerous other studies showed HCQ’s effectiveness when used early in high-risk patients, much less successful “late in the disease course.”

Yet diabolical US dark forces want its widespread use prevented so Big Pharma can cash in big.

He called what’s going on today a “misbegotten episode” of scientific fraud and abuse of public health and welfare.

Conventional and social media giants are complicit with US dark forces and Big Pharma in promoting the development and use when available of hazardous to human health coronavirus vaccines while demeaning HCQ.

It’s another example of corrupted wealth and power at the expense human health and welfare.

The official/establishment media promoted vaccine narrative is fake news — the NYT part of scam by publishing a litany of Big Lies about HCQ.

“Hydroxychloroquine did not prevent Covid-19 in a rigorous study (sic) of 821 people who had been exposed to patients infected with the virus,” the Times roared.

When administered by overdoses way above what’s effective or well beyond the disease’s early stage, lack of success occurs, what this study and others like it showed.

When properly administered prophylactically or early after the disease’s outbreak, HCQ was proved effective.

What Times articles and similar ones by other establishment media suppressed is what’s most important to report.

On Friday, James Fetzer posted information on his website (jamesfetzer.org) by an anonymous (for the individual’s safety) DC insider, explaining the following:

“Big Pharma and the WHO have known all along about the HCQ cure for COVID-19.”

“Everyone at the CDC, NIH and FDA knows that hydroxychloroquine (HCQ) is the silver bullet for the coronavirus.”

“They also know that, when combined with azithromycin and zinc, the 3-in-1 protocol provides the magic formula for almost anyone with coronavirus disease.”

Complicit with Big Pharma against public health and welfare, Bill Gates, Anthony Fauci, Deborah Birx, Robert Redfield, their co-conspirators, and complicit establishment media are part of the diabolical plot to mass-inoculate unsuspecting Americans and others abroad with harmful to human health/toxic coronavirus vaccines when available.

The public is being carpet-bombed with disinformation. Fear-mongering is rife.

Big government is part of the problem. Corporate executives and DC insiders won’t touch vaccines they tout publicly to an unsuspecting public.

It’s true about all US preemptive wars by hot and other means on nonbelligerent nations threatening no one.

It’s true about COVID-19 — how it originated, what’s effective in treating it, and scamming the public about vaccines likely to be available in the coming months that will risk serious harm to human health if used as directed.

Drug and biotech companies stand to make billions of dollars by convincing millions of people to be vaxxed.

When available, the risk will be extremely high that COVID-19 vaccines may cause serious health problems to individuals permitting themselves to be inoculated — including the disease that fake news promotion claims they’ll be protected against. 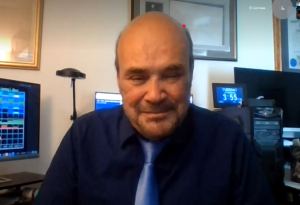 2023 Will Be Year from Hell – Martin Armstrong