Antifa/BLM Shut Down By Austin & State Police, Prevented From Carrying Out Planned Violence 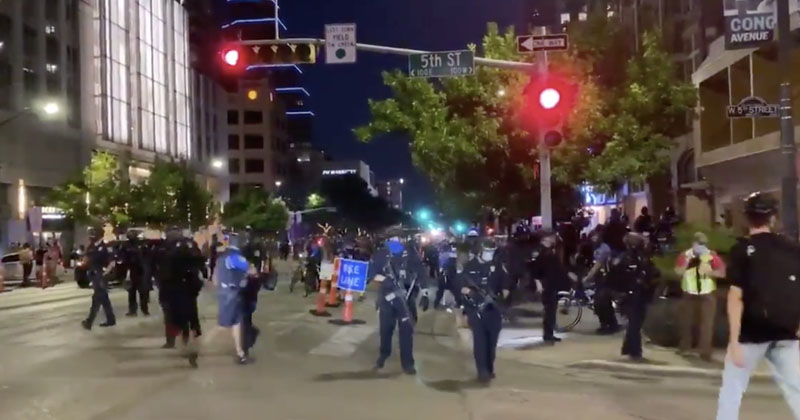 Groups of Antifa and Black Lives Matter agitators were shut down and arrested by state and local officials on Saturday after threatening to deploy sniper teams and gun trucks into downtown Austin, Texas, to establish a CHAZ-like autonomous zone in the area.

Over 100 police officers, some in riot gear, or riding horses and bicycles, were deployed in Texas’ capital city in a bid to minimize the far-left rioting and vandalism that was planned as part of an anti-police march.

Footage from the ground, including exclusive Infowars coverage, shows the overwhelming response by the police, who split the protesting Antifa/BLM group and established control over the downtown streets.

Educate yourself further by tapping into the Infowars Store’s vast collection of books and movies.

Austin Police and protestors clash on 4th and Congress in front of Garrett Foster’s memorial. pic.twitter.com/7J9CdKIkQp

Protester had been arrested by APD pic.twitter.com/6IyomXkoDI

According to local news, about 20 people were arrested or detained before midnight.

APD not messing around. They’re continuing to drive protesters down the street pic.twitter.com/nYCwJdfqT6

Several arrests being made in downtown ATX pic.twitter.com/ejrKyEbvjJ

The effective response by law enforcement left the far-left groups splintered and demoralized.

Agitated ANTIFA member continues to scream at other protesters pic.twitter.com/v5NbEjGrYh

The confrontations died down by 1:30AM once police had completely secured the area.

As Infowars first reported, the massive police presence was prompted by internal intelligence memos outlining Antifa’s plans to deploy sniper teams on rooftops, gun trucks to patrol the streets, and explosives to use against the Austin Police Department building.

Alex Jones and Dr. Steve Pieczenik break down the far-left’s plan to take over downtown Austin and establish another “autonomous zone.”