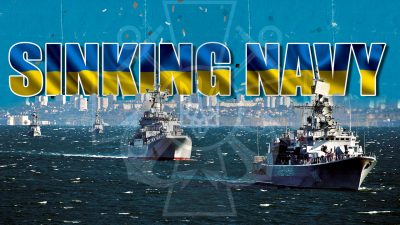 In few areas are Russia’s and Ukraine’s divergent fortunes as evident as in naval armaments. Whereas the Russian Navy has overcome the malaise of the 1990s and went on to introduce new classes of warships, including state-of-the-art missile frigates, attack submarines, and the mysterious “Poseidon-carriers”, Ukraine has gone in the opposite direction. In spite of having begun in roughly the same shape and in possession of the Nikolayev Shipyard, where all manner of ships up to and including aircraft carriers were built. The never-finished Slava-class guided missile cruiser Ukraina that is still slowly disintegrating at that shipyard has come to symbolize not only the fate of Ukraine’s navy but the country itself.

The fleet’s flagship Hetman Sahaydachny, a former Soviet maritime border guard frigate, has seen considerable time underway in better times, even participating in multinational anti-piracy missions off the Horn of Africa. After 2014, its condition rapidly declined even though it nominally participated in Sea Breeze exercises with NATO as late as 2018. While it is currently officially being refitted with new electronic equipment and is scheduled to return to active service in 2021, the ship’s future is still in doubt. While there was some discussion concerning the construction of a squadron of 2,000 missile corvettes fitted with both Western and Ukrainian weapons and electronics, for understandable reasons that project never progressed very far.

Ukraine and United States have reportedly held discussions on the acquisition of one or two Oliver Hazard Perry-class frigates but, even if these elderly ships were to be transferred to Ukraine for free, the country would still face massive problems trying to crew and operate them, due to the systems and weapons not being compatible with anything else currently in use by Ukraine. Moreover, the Perries were designed as low-cost anti-submarine escorts for use in the Atlantic, and aren’t suitable for operations close to hostile coastlines where their weak anti-air and anti-surface weaponry becomes a liability.

Thus, the future of Ukraine’s navy as a blue-water force looks fairly bleak, with no modern vessels in service or projected for acquisition. That state of affairs appears to satisfy the official Kiev, under whose leadership the navy became more of a littoral, coastal force whose main areas of interest are offshore economic zones of the Black Sea and the efforts to control the Sea of Azov.

While the phrase “mosquito fleet” originated in Great Britain during World War 2 as a description of the Royal Navy’s vast force of motor torpedo- and gun-boats, Ukraine’s media has attached it on more than one occasion to the lackluster collection of small craft in use by Ukraine’s naval forces. Even though fast attack craft inherited from USSR have fared little better than the larger ships, here at least there are replacement ships being built and procured.

The best known of these “mosquitoes” are the Gyurza-M armored gunboats that, so far at least, proved to be less than impressive. Armed with two remote-control weapons stations with 30mm cannon and anti-tank guided missiles, their effectiveness is badly limited by low seaworthiness. Two of them were captured by Russia’s coast guard during an unsanctioned and unsafe attempt to cross under the Kerch Bridge and reach Mariupol. Twenty of these vessels were planned, but it doesn’t look as if that number will be reached. Instead, Ukraine’s attention has moved on to other, possibly more dangerous vessels.

The Centaur class is slightly smaller than the Gyurza-M, at 47 tons versus 54 tons, but it is significantly faster, with the claimed top speed of 50 knots being twice of that of the Gyurzas. And even though the armament of heavy machine guns and automatic grenade launchers, backed by 80mm rocket pods, seems less impressive, their “business end” is a platoon of 28 soldiers these boats can carry.

Combined with the Mark VI patrol boats that Ukraine is procuring from the United States, which are lightly armed but very fast boats also capable of carrying troops, Ukraine’s navy appears to be acquiring the ability to launch surprise amphibious raids of up to a battalion of light infantry in strength, once the fleet of these boats grows in size in the coming years. While certainly not a major force in absolute terms, it is just enough to exert pressure on the DPR’s southern flank that rests on the Sea of Azov coastline. Eight Centaurs are reported as being planned, and the first two boats are undergoing sea trials.

Complementing Ukraine’s naval strike and raiding ability is the Neptun anti-ship missile derived from Russia’s Kh-35 Uran, though with significant differences and also possibly collaboration with Turkey which is developing its own Harpoon-based anti-ship cruise missile at the same time, and/or with assistance from other NATO member states. The Neptun has passed a number of tests, including one live-fire one against a simulated naval target, and appears to be meeting its development goals without major problems. The missile’s size means it theoretically could arm the Ukrainian navy’s still-extant post-Soviet surface ships, but their age and lack of replacement means that it is more likely to see service as a coastal artillery weapon which could readily provide Ukraine with some serious firepower in the Sea of Azov.

The Neptun is described as being able to strike both naval and land targets, suggesting a combination of active radar guidance combined with GPS. If deployed in land-based form on the shores of the Sea of Azov, it could be used to shut down large swaths of the Sea of Azov under the guise of live-fire exercises. But arguably the worst-case scenario is the use of the missile against the Kerch Bridge, which is located within the 300km range of the Ukraine-controlled Azov coastline. One can readily imagine an MH17-style scenario in which a Ukrainian missile strikes and damages the bridge, with the attack then being attributed—with full NATO support—to a training accident or even a “Russian missile”. It would also not be an easy attack to respond to, as it would require Russian military strikes against targets on Ukraine’s territory that would elicit a highly predictable NATO reaction. It would also be a difficult attack to defend against, requiring the deployment of anti-missile weapons like the Pantsir-S and Tor which might not guarantee protection against a surprise attack by a highly subsonic, sea-skimming missile relying on GPS or even simply inertial guidance and not advertising its own presence by radar emissions.

Moreover, Neptun will give Ukraine the ability to launch relatively precise missile strikes against high-value targets in the DPR and LPR [Donbass]. In combination with the Vilkha rocket system and the Grom short-range ballistic missile, this weapon is part of Ukraine’s emerging deep-strike missile arsenal.

The abortive Gyurza-M raid into the Sea of Azov and NATO’s unwillingness to become directly embroiled in the Sea of Azov conflict do not mean we have seen the last of the provocations. Bolstered by US financial and material assistance, Ukraine is building up offensive capabilities for use in the littoral regions of that body of water. While its military capabilities are not in the same league as Russia’s, Ukraine’s growing ability to launch high-speed naval raids and long-range missile strikes represents a more difficult challenge to counter than its deteriorating land forces.