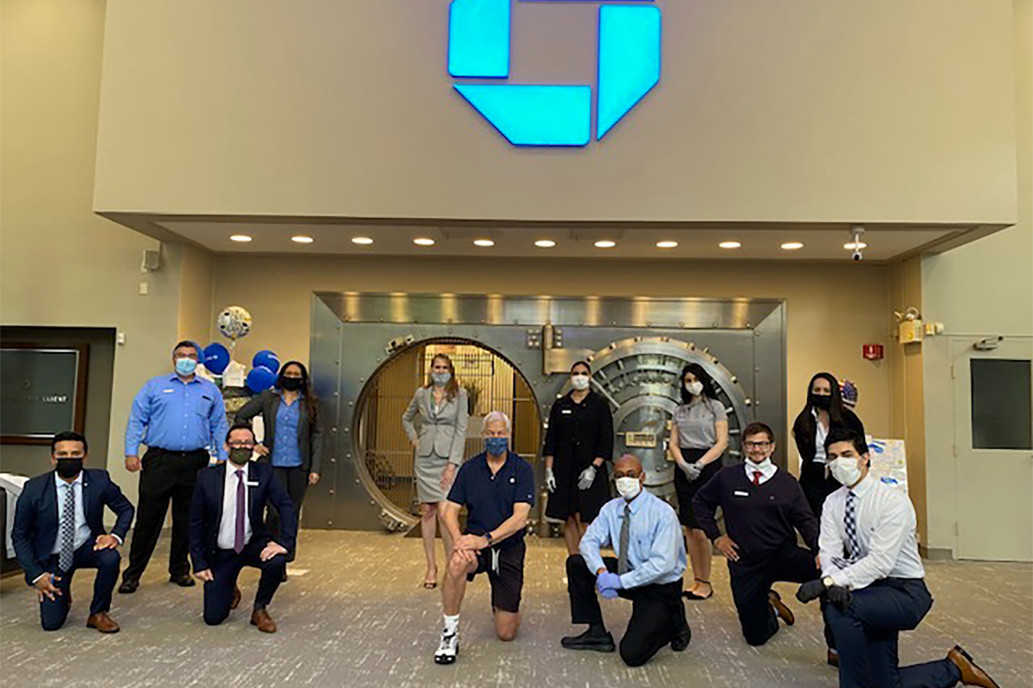 In the wake of worldwide public outrage over racist police violence, many of the United States’ largest corporations rushed to publicly align themselves with the growing movement for black lives. Yet a new report from the Public Accountability Initiative exposes how corporate America is actually bankrolling police departments across the country, including many of the same ones facing scrutiny over racist practices.

JPMorgan Chase CEO Jaime Dimon very publicly took a knee outside a New York branch of his bank in early June, also circulating a memo declaring the financial institution’s supposed dedication to struggling against injustice. “Let us be clear — we are watching, listening and want every single one of you to know we are committed to fighting against racism and discrimination wherever and however it exists,” he and the company’s diversity chief wrote together. Marathon Petroleum, the country’s 22nd largest business according to Fortune magazine, celebrated Juneteenth on its public Facebook page, declaring itself to “stand firmly against racism, intolerance and hate of any kind.” “Commemorating the ending of slavery in the U.S. is one way we’re encouraging learning and empathetic dialogue among our employees, as we work together to identify meaningful ways we can make progress,” it wrote.

Chevron was even more emphatic. “Black lives matter,” it said via Twitter, sharing words from its CEO Mike Wirth, who claimed he, “shared the anger and pain felt by so many Americans at the recent killings of unarmed black men and women.” “Racism and brutality,” he added, “have no place in America.” While many were quick to point out that black lives in Ecuador did not seem to matter much to Chevron, where it has refused to pay for an accident that dumped over 80 times the amount of oil BP spilled in the Gulf of Mexico, the company continued to associate itself with the growing public discontent against racism.

But the Public Accountability Initiative’s new study found that these companies were responsible for bankrolling some of the country’s most notorious police departments. By giving money to police foundations, corporations essentially buy weapons, equipment, and surveillance technology for law enforcement, helping them to avoid public scrutiny of questionable purchases and adding to their already bloated budgets.

“These companies, which rely on extraction and exploitation to secure their profits, have an incentive to form tight bonds with police forces, which function to uphold and protect their interests in the face of community opposition. In many states, these companies go so far as to back laws to criminalize protests of dirty energy projects such as pipelines, openly weaponizing the police and criminal justice system to protect the profits of the fossil fuel industry and the banks that fund them,” they write.

JP Morgan Chase, for instance, is an official “corporate partner of police.” In the wake of the Occupy Wall Street Protests — a movement directly aimed at the power and wealth of corporations like JP Morgan Chase and suppressed by the NYPD — the bank donated $4.6 million to the New York City Police Foundation. The NYPD has been among the most brutal in its opposition to the George Floyd Protests, with officers choking black men unconscious, ramming patrol cars into crowds of protesters, beating up medical workers, and using fake taxis to arrest demonstrators.

Marathon, a company synonymous in Michigan with polluting communities of color, also has a close relationship with the police, its Security Director sitting on the board of Detroit’s police foundation. Meanwhile, Chevron is a top corporate sponsor of police departments all over the country, including in New Orleans, Houston, and Salt Lake City. Together, these companies not only donate huge sums to law enforcement but also sponsor events and galas celebrating the institution, reminding the public, in the report’s words, “that police power is backed up by corporate power.”

The protests — and the heavy-handed response to them — has hardened the public’s attitude to law enforcement. A June survey found that three-quarters of Americans supported the movement against racist policing. Perhaps more surprisingly, one Reuters/Ipsos poll found that 39 percent of the country agreed that police departments should be “completely dismantled” and the money given to address homelessness, mental health and domestic violence, a number not altogether inconsistent with similar polls on the issue.

While “woke” corporations like JPMorgan Chase, Chevron and Marathon claim to be supporting the movement for black lives, their donations to police, the report notes, help to “tyrannize the very communities” these corporate entities are now claiming to stand with against injustice.

Alan MacLeod is a Staff Writer for MintPress News. After completing his PhD in 2017 he published two books: Bad News From Venezuela: Twenty Years of Fake News and Misreporting and Propaganda in the Information Age: Still Manufacturing Consent. He has also contributed to Fairness and Accuracy in Reporting, The Guardian, Salon, The Grayzone, Jacobin Magazine, Common Dreams the American Herald Tribune and The Canary.

THE FAST AND THE FUNGIBLE: SHEMITAH CRYPTO AND STOCK MARKET CRASH CONTINUES

IS IT A BIOWEAPON? MRNA/DNA PRODUCTS – DATA, EVIDENCE AND OBSERVATIONS

Ahmad Manasra and the Crime of Existing While Palestinian