At Fed Chairman Jerome Powell’s press conference on July 29, he persisted in his explanation that all of the Fed’s bailout programs are really about helping the American people get back on their feet. Here’s one more, among a growing mountain, of reasons to question that.

Sri Lanka is an island country situated in the Indian Ocean and located about 9,000 miles from the United States. Its population of approximately 21 million ranks it the size of the state of Florida. Despite those statistics, Sri Lanka somehow became the main participant in an emergency lending facility set up by the Fed.

According to an official statement by the Central Bank of Sri Lanka (CBSL), “the CBSL has decided to pledge a sum of USD 1 billion worth of US Treasury Bonds held in the CBSL reserve and enter into the above type of Repo facility with the FED. This would permit the CBSL to raise USD 1 billion in cash form when required. When this Repo facility is settled by the CBSL, there will be no change in the CBSL Reserve position as the FED would release the pledged bonds back to the CBSL. The cost to the CBSL would be the applicable Repo fee, which is about 0.35 per cent per annum.”

The Fed’s foreign repo loan program is called the Facility for Foreign and International Monetary Authorities or FIMA. It was announced on March 31, 2020 by the Fed and extended on July 29 by the Fed to last until at least March 31, 2021. The program, according to the Fed, had the goal of allowing foreign monetary authorities to “temporarily exchange their U.S. Treasury securities held with the Federal Reserve for U.S. dollars, which can then be made available to institutions in their jurisdictions.”

More importantly, the Fed noted that the FIMA program would help the “U.S. Treasury market by providing an alternative temporary source of U.S. dollars other than sales of [Treasury] securities in the open market.”

The Fed, which is the key supervisor of the largest bank holding companies in the U.S., is keenly aware that the mega banks on Wall Street are sitting on tens of trillions of dollars of interest rate derivatives (swaps) which may, or may not, be properly hedged. There might also not be a secure counterparty on the other side of those interest rate swaps held by the banks.

If interest rates took a sudden, sharp upward turn, the Fed might learn to its embarrassment and horror that these interest rate swaps were not properly hedged, in much the same way that the Fed learned during the last financial crisis, to its embarrassment and horror, that these mega Wall Street banks had used AIG as a counterparty to their credit default swaps. Unfortunately, AIG had not set aside any money to pay off those credit default swaps when the trades turned against AIG. The giant insurance company had to be taken over by the U.S. government in order to pay off those credit default swaps. Here’s the embarrassing chart of the big names on Wall Street that had placed their bets with an unsafe counterparty that had not reserved against losses.

But according to the Fed’s weekly balance sheet releases, known as its H.4.1, its FIMA repo loan program never had more than $1.4 billion in loans outstanding (which occurred on May 13, 2020) suggesting that Sri Lanka was the major user. That’s really not going to make a dent in a $20.6 trillion public Treasury market.

So if the program was a bust in terms of participation, what’s the point of the Fed announcing on July 29 that it’s extending it? Like all of the Fed’s other programs propping up everything from junk bonds to money market funds to commercial paper to asset-backed securities to mortgage-backed securities, the core idea is to send the message that the Fed is the willing and able lender-of-last resort. The Fed has publicly stated that it is placing no cap on the money it is willing to create to support the markets.

Notice the last word in the above paragraph – “markets.” For the majority of the Fed’s 107 years of existence, its governing statute, the Federal Reserve Act, was interpreted to limit its lender-of-last resort powers to providing loans to commercial banks and other deposit-taking financial institutions. The Fed’s Discount Window for emergency loans is restricted to deposit-taking banks and precludes borrowing by the trading houses on Wall Street. The theory was that deposit-taking banks are the institutions that provide loans to businesses and consumers to sustain a healthy and growing U.S. economy. That was and is a sound theory.

But for the first time in the history of the Federal Reserve, that sound theory was thrown out the window during the Wall Street-induced financial crash of 2007 to 2010. The Fed made more than $16 trillion in revolving loans to the trading houses on Wall Street, to hedge funds, to foreign global banks – to pretty much any financial institution that had a pulse and in some cases, like its loans to Lehman Brothers and its purchases of toxic assets from Bear Stearns, to those whose pulse had long expired.

Why did the Fed do that? Because the largest deposit-taking banks in America are now also the largest trading houses, thanks to the repeal of the Glass-Steagall Act in 1999 during the Wall Street-cozy Bill Clinton administration. For the prior 66 years, the U.S. had enjoyed a secure financial system because under the Glass-Steagall Act of 1933,  federally-insured deposit-taking banks were barred from owning securities issuers and trading houses. 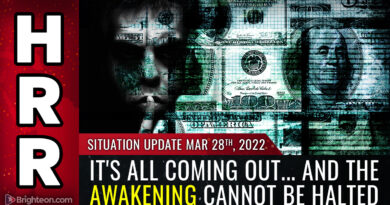 ANALYSIS: Embedded “good guys” are turning against the cabal… It’s ALL coming out… and the awakening cannot be halted