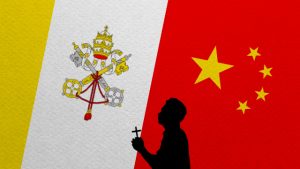 Some members of the underground Catholic clergy in China now believe that the Vatican-China agreement has exacerbated the persecution of underground Catholics and they see no hope for their churches to survive the purge. For those who don’t know the term underground church, it is used to refer to Chinese Catholic churches in the People’s Republic of China which have chosen not to be associated with the state-sanctioned Chinese Patriotic Catholic Association controlled by the Chinese Communist Party (CCP), and the Jesuits.

Bitter Winter, a China watchdog website dedicated to informing the underground Catholics, reported last Saturday that Chinese authorities are bearing down on a parish in Fujian province, looking for whistleblowers who leaked information to Western news outlets about the shocking 4-day torture suffered by Father Huang Jintong, who refused to join the Chinese Patriotic Catholic Association (CPCA).

The incident involving Father Huang has already gained the attention of the Western media but most have remained silent to not upset the CCP and the Vatican. Imagine that more than a dozen Chinese personnel went to his home on April 2 and led him away without an explanation. Authorities deprived him of sleep for four days, using a torture method called “exhausting an eagle” apparently very popular in Communist China until he eventually succumbed and agreed to join the Chinese Patriotic Catholic Association (CPCA).

The incident could however become a problem for the renewal of the infamous Vatican-China agreement of 2018, so the Communist authorities want to find the leakers to punish them to set an example for others in the undeground Church. After all, the Sino-Vatican agreement has enabled the CCP to cloak its persecution of the underground Church by intimating that it has been at least tacitly approved by the Vatican.

The agreement originally worked out by the Vatican Illuminati scheduled for renewal on September 22, 2020, has yielded a steady drumbeat of concern since its ratification, but the Jesuits and Pope Francis have silenced any internal opposition after receiving billions from the CCP since 2013. So despite the CCP’s decades of countless acts of persecution towards Chinese Catholics, Bishop Sorondo the current Chancellor of the Pontifical Academy of Sciences and the Pontifical Academy of Social Sciences. told Vatican Insider, “[A]t this moment, those who best realize the social doctrine of the Church are the Chinese.”

In the meantime in a moment of increasingly dangerous military flexing both over Taiwan and in the South China Sea, the People’s Liberation Army has reportedly been ordered “not to fire the first shot” in any potential confrontation with the United States. It suggests this emerging ‘new Cold War’ scenario could turn hot at any moment and the Vatican might be on the wrong side of the fence.

Warren Buffett Spent $25 Billion Buying Back HIS OWN Stock! “Eventually the party ends”