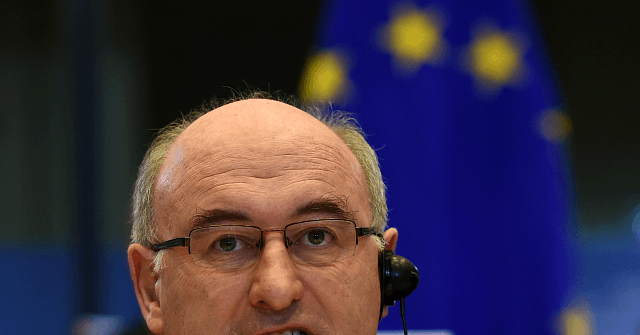 LONDON (AP) — The EU’s trade commissioner is coming under intense pressure to step down after attending a golf event despite a ban on public gatherings during the pandemic.

The job of Phil Hogan, an Irishman who is expected to play a key role in trade talks with the U.K., is under threat amid a growing crisis stemming from a golf society dinner in the west of Ireland that was attended by more than 80 people. A surge in coronavirus cases recently prompted Ireland to reimpose restrictions on public gatherings that were eased in early summer.

The agriculture minister and deputy speaker of the Senate resigned last week after confirming they were at the event.

Hogan offered a “fulsome and profound apology” over the incident.

One Rule for Me: Irish and EU Politicians Caught Breaking Lockdown Rules at Party https://t.co/4gvudj35wN

The deputy head of government, Leo Varadkar, said he shared the public’s anger at the golf event, but said the apology helps. He told RTE that Hogan may not have been as familiar with the coronavirus situation in Ireland because he was not based in the country.

Varadkar said that “he also needs to account for himself and explain and answer any questions that might arise, not just in relation to the dinner but also his movements around the country.”

“If he cannot do that, he needs to consider his position,” he said.

One Bank Spots A Big Red Flag For Stocks: Buybacks Are Inexplicably Tumbling

Chinese Investors Shouldn’t Be Allowed To Buy US Properties: DeSantis