This post was shared from the russia-insider.com's RSS feed

Having already visited all the famous cities of Russia’s celebrated tourist route known as the Golden Ring, we wanted to visit somewhere which is less well-known and which hasn’t yet lost its provincial charm. Although several of its neighbours in the region are part of the Golden Ring route of ancient Russian cities, the city of Gorokhovets is more often than not left off this list. It is not a particularly famous city and it has never played a central role in Russian history, nor does it have real links with any major figures from Russia history or culture. Gorokhovets however is an old merchant city whose appearance has hardly changed since the 19th century. Gorokhovets could be described as a hybrid of the established tourist destinations of Plyos, with its hilly surroundings on the River Volga, and Suzdal, with its multitude of old churches and buildings and provincial atmosphere.

The city is located relatively close to the large city of Nizhny Novgorod on the M7 Federal Highway. Up until the recent launch of the Lastochka high-speed train between Moscow and Nizhny Novgorod which makes a stop in Gorokhovets, there was no direct train link between Gorokhovets and the capital. These years of poor transport links nevertheless helped Gorokhovets remain unspoiled by industrialisation. 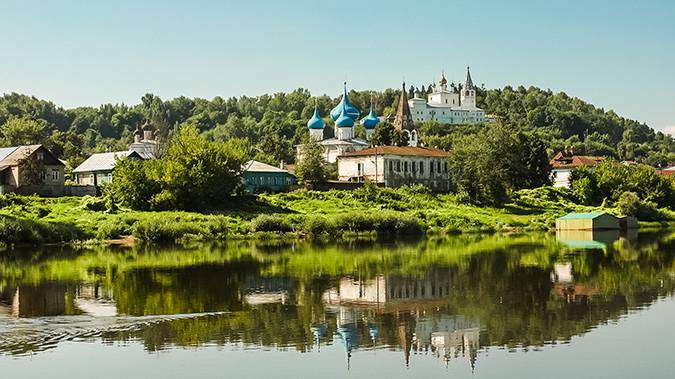 View of the city from Klyazma river

We visited the city in the height of summer and the city appeared very calm with very few people about, in fact it was only the odd car now and then that spoiled the illusion that I had travelled back in time. I instantly appreciated why the city has been named a historical city as you are immediately struck by the number of old buildings which have survived in the city. Among the typical wooden Russian houses with decorative window frames are some elaborate examples. One such building is the house of industrialist Mikhail Shorin which is a modern style wooden mansion complete with a tower.

Normally the only buildings in Russia to survive from the 17th century tend to be churches, however Gorokhovets also has seven 17th-century stone buildings which were once home to merchants. As a comparison there are only four surviving 17th-century civil buildings in nearby Nizhny Novgorod and Moscow only has one. One of Gorokhovets’s surviving civil buildings is the Sapozhnikov House, which is now a museum and inside its thick stone walls the building’s interiors have been recreated to how they would have originally looked.

Walking around the labyrinth of staircases and going down to the cellar allows you to soak in the history of the place.

The main square is dominated by the Annunciation Cathedral, which is a traditional Russian monumental style of cathedral with five pale blue domes. Today it no longer functions as a place of worship and is owned by the neighbouring museum, although this arrangement may change in the near future. Also here is the Sretensky Convent which was established in 1658 on the orders of Patriarch Nikon and today is once again a functioning convent.

From here we crossed the pontoon bridge over the River Klyazma to visit the Znamensky Monastery on the other side of the river. It is only possible to make this crossing in the summer when the bridge is there or in winter when the river has frozen over. From this side of the river you get stunning views of the city which appears like a scene from a Russian fairy tale: wooden buildings, onion-dome churches and monasteries rising above the river on a picturesque hill.

It is a view which has not drastically changed over the last 300 years.

The hill is known as Puzhalova Hill (derived from the old Russian word for ‘to frighten’) and features in one of the most famous legends about the city. Being situated between Moscow and Kazan, Gorokhovets served as a Russian defensive outpost and was subjected to raids by the Tatars throughout the 15th and 16th centuries. One such raid came in 1539 but it is said that the Tatars were scared off when they saw a vision of a knight appear over the hill. It is well worth the rather steep walk up here via a rickety staircase both to look around the Nikolsky Monastery at the top and to enjoy the views from here of the River Klyazma and the Znamensky Convent and endless forests on the other side of the river.

The final destination on our trip was to a site of natural beauty just outside the city called Bald Hill, as no trees grow on the hill’s summit because of the wind. According to legend a Tatar khan who died during a raid on Gorokhovets was buried here. From here you treated to completely unspoiled views of the forests on the other side of the River Klyazma which run to the horizon.

Out of all the cities in Russia we have visited, Gorokhovets occupies a special place. Here there is a perfect combination of provincial charm and beautiful natural surroundings. It is unsurprising that Gorokhovets has been used as the backdrop for several historical films as it really looks as if time has stood still here since the 19th century. It is a great place to spend a weekend and forget all about the hustle and bustle of modern life. In terms of tourist infrastructure, there are several guesthouses here and a nice hotel. There is not much choice in terms of restaurants or cafes in the city, but provided you are not expecting fine dining you shouldn’t be disappointed.

In 2018 the city will celebrate its 850th anniversary and the regional authorities have pledged to restore the historical centre. It is possible that this will give the city a new lease of life and establish it as a favourite destination for tourists. Alternatively, it may result in the city’s historic buildings being renovated to such an extent that they appear to be brand new. Just to be on the safe side, there is no reason for delaying your visit to this authentic and charming provincial city!

UncoverDC with Tracy Beanz: RBG and Delusions of Grandeur