Authored by Wolf Richter via WolfStreet.com,

US airlines are in the crappiest recovery ever.

They’re getting hit in two ways:

The number of passengers entering the security zones of US airports is still down 65% from the same time last year, according to TSA airport screenings. Normally, there is the summer peak in June, July, and early August, then passenger count drops in the weeks before Labor Day, and surges after Labor Day, as business travel picks up and people that don’t have kids in school go on vacation. But this year, business travel, including the entire conference and meeting sector, is still mostly dead and vacation travel is still thin, especially among the older people who might otherwise travel in the fall.

The chart shows TSA checkpoint screenings per day, as a seven-day moving average through October 13, in 2019 (black line) and in 2020 (red line): 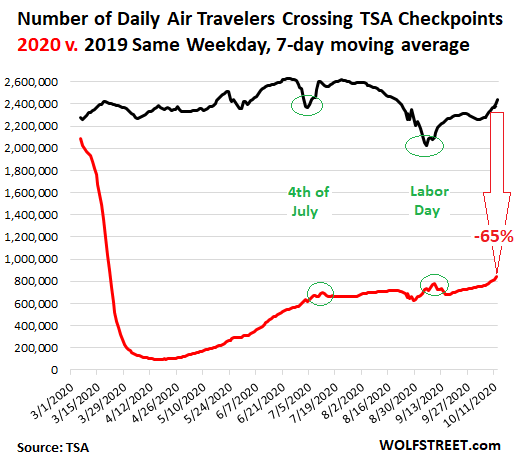 When an industry has 65% less traffic than a year earlier, that’s catastrophic enough. But now there’s the other issue…

Retail prices of airline ticket in September have plunged by 25% from January, before flight restrictions to China and other countries began to hit, according to the Consumer Price Index for September, released today by the Bureau of Labor Statistics. During the three months of February, March, and April, the CPI for airline tickets plunged 30%, by far the biggest three-month decline in the data going back to 1984. Even after 9-11, the sharpest three-month decline topped out at -5.9%. 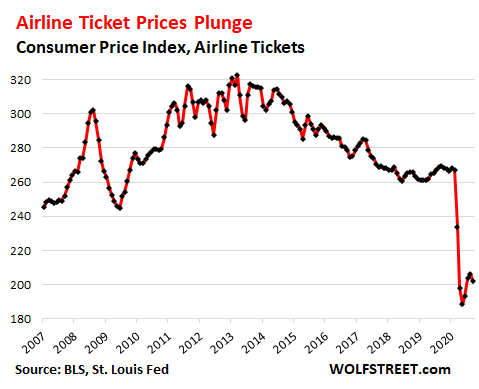 For airlines, the crisis began at the end of January with flight restrictions to and from China and it expanded from there. There has been some increase in domestic travel. But international travel – a lucrative segment for airlines – remains scarce given the continued travel bans. And international premium and business travel – the most lucrative segment for airlines – is even scarcer, given the travel bans and the corporate reluctance of sending their people around the globe unless they absolutely have to go.

On Tuesday, Delta Air Lines [DAL] reported that it had lost $5.4 billion in the third quarter, on a 76% drop in total revenue, compared to Q3 last year. While freight revenue dropped only 25% and other revenue increased 21%, passenger revenue collapsed by 83%!

Delta got hit particularly hard because it had focused on the juicy segment of premium business travel. Ticket revenues – the toxic mix of fewer tickets at lower prices – collapsed across the board, but most on the lucrative international routes. Year-over-year change in ticket revenues by segment:

Delta still has $21.5 billion in cash and cash equivalents to eat through. And it will last for a while. Its “daily cash burn” – the new metric, born in the Pandemic, that all airlines now use – was still $18 million a day at the end of September. That’s over $1 billion every two months. In the Q2 report, CEO Ed Bastian said Delta would stop burning cash by year end. Today, he moved that target into the spring of 2021.

“The virus has had a much broader impact over the course of the year than any of us were suspecting,” Bastian told the WSJ in an interview.

And for Delta, it’s not just Delta: Several of the airlines Delta had significant equity stakes in and partnered with, including Virgin Atlantic, Latam Airlines, and Grupo Aeroméxico, have filed for bankruptcy as their governments wisely refused to shanghai taxpayers into bailing out these airlines’ shareholders, such as Delta. Delta has now written off its stakes in Latam and Aeroméxico, a sign that Delta expects its equity stakes to get wiped out in bankruptcy; and it has written down its stake in Virgin Atlantic. 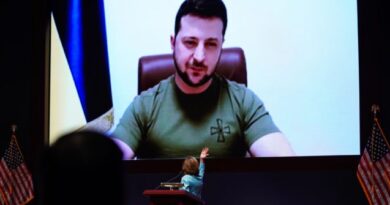 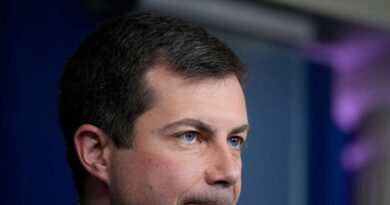 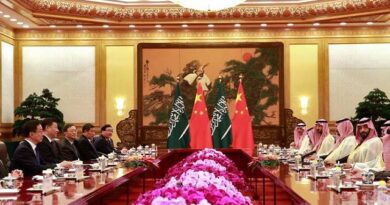