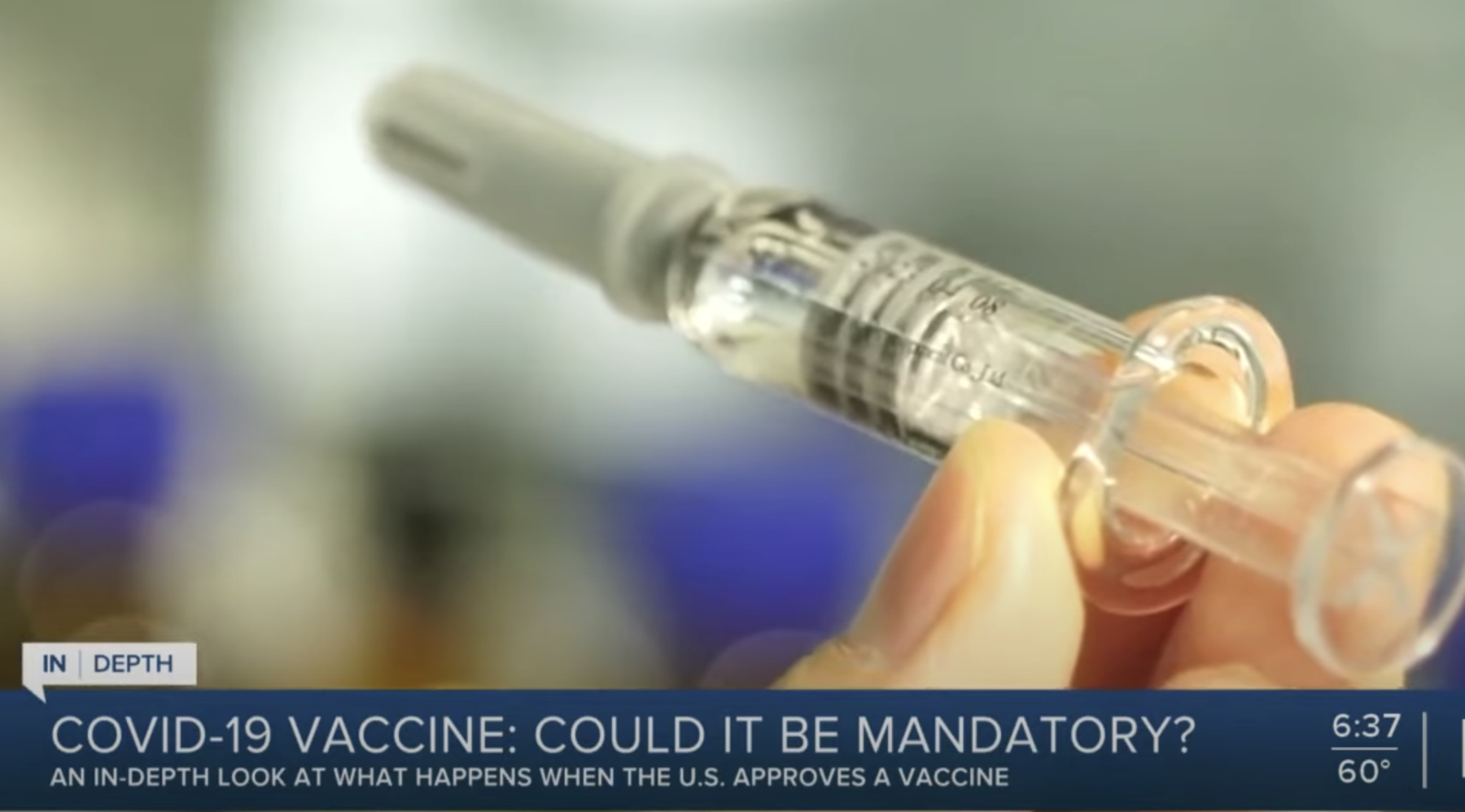 Throughout the coronavirus response, those within ‘official’ positions around the world have chimed in on the idea of a mandatory Covid shot. Their hopes and potential future plans have been all over the board causing apprehension and confusion within the public. Whether you want the eventual shot, being rushed through emergency use authorization, or not, answers have not been clear.

In what has been a growing trend in political, and now health reporting, shadowy anonymous sources have driven headlines and news cycles. Always framed as ‘for their protection,’ yet ignoring accuracy or ability to verify their prognostications, the vaccine narrative hasn’t escaped it.

CNBC is now reporting that “The Food and Drug Administration has asked a group of advisors to set aside three days in early December for potential meetings to discuss Covid-19 vaccines…according to two people familiar with the plans. The advisory group may be asked to weigh in on Pfizer and Moderna’s vaccines, said the people, who asked not to be named because the plans aren’t yet public.”

Biden gave his answers in October during an ABC News Town Hall saying “we should be thinking about making it mandatory.” When asked how he would enforce that, Biden appeared to describe a scenario where he would ask Governors and mayors to execute the mandates.

Anyone paying attention to the last few years of American legislation sweeping across states [originally justified due to a measles outbreak] will easily see how such mandates will roll out. They will take the form of coercion by law, threatening to take away anything from access to school [for children] and daycare all the way to unemployment benefits for adults. Meanwhile, grocery stores, travel, and concert venues have already signaled they are open to denying access unless proof of vaccination is shown.

Frontline workers are being targeted for the first round of the Covid shots. It will be no surprise if hospitals treat their previously celebrated frontline heroes like subhuman rule-violators if they refuse the experimental shot.

Tests cases have already proven themselves in thorough court settings when it came to mandatory flu shots for healthcare workers. The “vaccinate or mask” policy was ruled unreasonable and called “a coercive tool” instead of a protective health policy in a case brought against the Sault Area Hospital in Sault Ste. Marie.

Nevertheless, the medical community, whose aggressively protected dictum of lauding the safety and efficacy of vaccination when doling them out to kids, are now suddenly questioning the coming shots they’ll be coerced into taking. Or through the lens of the mainstream media’s open discriminatory stance, the medical community has turned into ‘anti-vaxxers.’

A Facebook group titled NHS Workers for Choice, No Restrictions for Declining a Vaccine insist they are not an anti-vaccine – but that didn’t stop the media from calling them names. The group was made up of “hundreds of NHS staff” including “a GP, several A&E nurses, healthcare assistants, lab workers, and care home staff” according to the Daily Star hit piece.

Meanwhile, here in the U.S. the Washington Post spins their coverage a little gentler with its piece titled Doctors and nurses want more data before championing vaccines to end the pandemic. WaPo writes of a propaganda push when describing “Large health systems, medical societies and the federal government are launching an effort to persuade front-line health-care providers to take novel vaccines.”

The endless hype surrounding the endpoint data from Pfizer, Moderna and AstraZeneca’s shot is not thorough at this stage, published in peer-reviewed journals or even transparent for the public to access. It’s from simple science by press release public relations statements. In addition, the data being submitted for Emergency Use Authorization to the FDA is often resting on a small number of the total participants involved in the trials.

“Perhaps watching a scientific community praise and promote vaccines based on press releases rather than review of data may actually promote vaccine skepticism.”

The hesitancy among doctors and nurses is not the same as the anti-vaccine movement, writes the WaPo who appear to be correct. Traditionally, what the media labels ‘anti-vaxxers’ were parents who were ‘pro-vax’ until experiencing an injury in their child after following recommended schedules put forth by officials. In juxtaposition, the WaPo writes of New Jersey State doctors “Among professionals contacted by the state, “some did not want to be in the first round, so they could wait and see if there are potential side effects,” New Jersey Health Commissioner Judith M. Persichilli said at a Nov. 9 news briefing. Of those who said they would not take the vaccine, many said they would be more than willing to get the vaccine at a later date, when more data is available,” she said.” It appears those doctors are going to wait around and see if the people they inject will show adverse reactions before deciding to take the shot themselves.

A survey of 609 healthcare workers in Los Angeles found respondents reported unwillingness to participate in a coronavirus vaccine trial, with 66.5% intending to delay vaccination.

Over the last month, headlines abound intending to shape the public narrative around the coming Covid shot. Global News Canada asks A coronavirus vaccine is almost ready. But will you take it? Forbes tells you What The Public Thinks About Mandatory Covid-19 Vaccinations.

I will be filing a Bill next week to eliminate the State’s power to mandate and force vaccines upon citizens during a state of emergency. Government should not be able to forcibly vaccinate—it should be an individual choice.

Florida Gov. DeSantis stated regarding the hyped press releases from Covid vaccine-makers hype, “I do believe that these breakthroughs represent probably the greatest rays of hope that we have seen since the pandemic began,”

Gov. DeSantis stated that Florida residents will not be mandated to take either vaccine.

While states are also now chiming in about how they will handle getting the shot into the arms of their residents. Law.com writes, “The New York State Bar Association on Saturday passed a resolution urging the state to consider making it mandatory for all New Yorkers to undergo COVID-19 vaccination when a vaccine becomes available, even if people object to it for “religious, philosophical or personal reasons.

Regarding the kids, government contractor Dr. Moncef Slaoui said in a recent interview, “the plan is to run trials at an expedited pace over the coming months, first with younger adolescents, then toddlers, and, finally, infants. If that goes well, Slaoui, expects most kids will be able to get vaccinated by the middle of next year.” writes Yahoo news.

The final word is that of Dr. Michael Yeadon, who holds a degree in Biochemistry & Toxicology & a research-based PhD in pharmacology. Dr. Yeadon spent 32 years working in pharmaceutical R&D and was a VP at Pfizer. He posted this letter to Twitter,

“Whatever one’s views are about political management of the pandemic in [the] U.K., we believe strongly that mandated or coerced use in the wider population of part-developed vaccines should play no role whatsoever in recovering from it.

Those at distinctly elevated risk of severe illness & death, of course should be offered it, using fully informed consent. But absolutely not mandated or coerced vaccination. We so argue this, because it’s illegal and unethical. It might be countered that this letter is superfluous because no one is suggesting it. Sadly, that isn’t true. On the contrary, senior figures from governments across the world are proposing exactly this. Leading U.K. politicians have worryingly even said that “our national policy now is to suppress the virus as much as possible until a vaccine becomes available.”

Despite any promises of a non-coercive Covid shot, the government’s apparatus for ramming through all sorts of legislation to eliminate any barrier hindering injectable pharmaceutical product lines making their way into your body is well-established over the last few years. Starting with a measles outbreak in 2019, nearly 200 bills suddenly appeared, as if waiting for the right moment. It was clear it wasn’t about measles then, and perhaps in a short time, we may discover there may be more to this new vaccine push than simply attempting to stop a cold virus or save lives – a primary endpoint that the Covid trials weren’t even designed for in the first place.

More Than 400 Studies on the Failure of Compulsory Covid Interventions