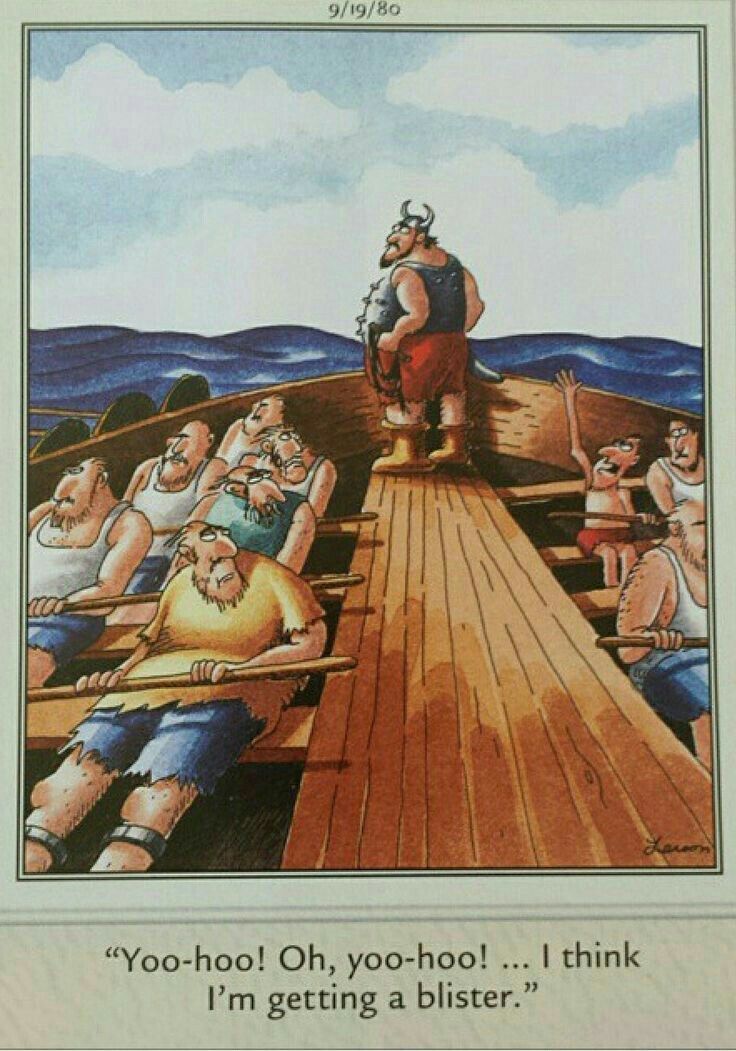 A “Far Side” cartoon describes our innocence about democracy.

A slave rowing a Viking ship puts up his hand and calls to the whip master: “Yoo-hoo! Oh, yoo-hoo… I think I’m getting a blister.”

Like this man, most people cling to the belief that our leaders represent our interests.

“Yoo, hoo, Mr. Bush, you lied about Iraq having weapons of mass destruction.”

At an elite gathering, Bush peered under his lectern and quipped: “Where are those weapons of mass destruction?”

A tiny cabal of international bankers chooses our “leaders”. This clique, which subtly controls every significant facet of our society is gradually establishing an Orwellian global police state. Much of the ruling class has been duped to think they are building a better world.

Prove it, you say? 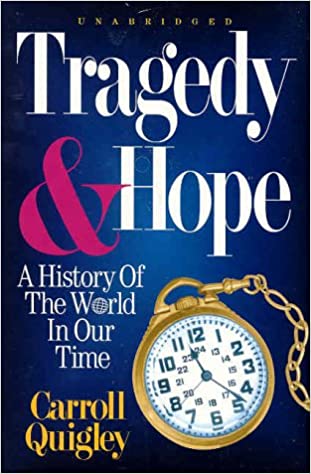 “The Naked Capitalist” by W.C. Skousen (available at www.abe.com & www.bookfinder.com) is yet another smoking gun. It is based on the revelations contained in Professor Carroll Quiqley’s “Tragedy and Hope: A History of the World in Our Time.” (1966)

Quiqley, a Professor of History at the Foreign Service School at Georgetown University was a trusted insider who had access to their private archives. He felt the plot, which he supported, was too important to be kept hidden. However, shortly after publication, his book was taken off the market.

Cleon Skoussen was an FBI agent for 16 years and the Police Chief of Salt Lake City for four years. His “The Naked Capitalist” distills the most shocking evidence from Quigley’s daunting 1300-page book.

At just 122 pages, “The Naked Capitalist” (1970) is a concise, lucid and absolutely convincing account of the international banker conspiracy. Historians have betrayed the public trust by largely ignoring this material.

Quigley confirms that a network of banking dynasties has, in Skousen’s words, “acquired a choke-hold on the affairs of practically the entire human race.” According to Quigley, they include “Baring, Lazard, Erlanger, Warburg, Schroder, Selingman, the Speyers, Mirabaud, Malet, and above all Rothschild and Morgan.” (Citations are from Tragedy and Hope, 51-52)

Quigley confirms that, starting with the Bank of England in 1694, these dynasties organized themselves in a system of central banks that charge their respective nations billions of dollars in interest for the privilege of using currency backed by the nations’ own credit. In other words, they have carried off a swindle of monstrous proportions.

Quigley quotes William Gladstone who as Chancellor of the Exchequer said in 1852: “The government itself was not to be a substantive power in matters of Finance, but was to leave the Money Power supreme and unquestioned.” (325)

This power of the Bank of England. . . was admitted by most qualified observers. In January, 1924, Reginald McKenna. . . as chairman of the board of the Midland Bank, told its stockholders: ‘I am afraid the ordinary citizen will not like to be told that the banks can, and do, create money. . . . And they who control the credit of the nation direct the policy of Governments and hold in the hollow of their hands the destiny of the people.'” [25]

Able to create money out of nothing, they naturally grabbed as much of the world’s real wealth as they could. Quigley writes about the formation of their American cartels: “The period 1884-1933 was the period of financial capitalism in which investment bankers moving into commercial banking and insurance on the one side, and into railroading and heavy industry on the other were able to mobilize enormous wealth and wield enormous economic, political and social power.” (71)

Indeed their representatives, the “Eastern Establishment” i.e. the Morgans and now the Rockefellers run the United States. (72) The principle mechanism is the Council on Foreign Relations.

According to Quigley, the ultimate goal is “nothing less than to create a world system of financial control in private hands able to dominate the political system of each country and the economy of the world as a whole. This system was to be controlled …by the central banks…acting in concert.” (324)

Quigley confirms that the bankers have usurped mankind’s collective instincts by financing the Socialist and Communist movements. Bankers love big government because the ultimate monopoly is the State. Through it, they take over their competition and control debt, resources, market demand and labor.

Speaking of the Communist takeover of the US government in the 1930’s and 1940’s, Quigley writes, “it must be understood that the power that these energetic left-wingers exercised was never their own power of Communist power but was ultimately the power of the international financial coterie.” (954)

In other words, millions of idealists committed to human brotherhood and equality were (and are) duped into advancing a totalitarian scheme to concentrate the world’s wealth and power into the hands of the superrich. More opportunistic Leftists, Communists, Feminists and Globalists prosper while piously pretending to serve humanity.

The Money Power controls the debate and encourages gridlock by backing all shades of the political spectrum and marginalizing anyone who shines the spotlight on them. (Ever wonder why the word “Rothschild” has never crossed Noam Chomsky’s lips? Or why the John Birch Society debunks the obvious fact that 9-11 was an “inside job?”) The media is controlled through direct ownership and advertising.

The Lamont family was “sponsors and financial angels to almost a score of extreme Left organizations including the Communist Party itself.” (945)

A small cabal of people who are not even citizens hold the financial purse strings of every nation.

This goes a long way to explaining “globalization” and the push to one-world government. It explains the assault on race, religion, nation and family. The bankers want a homogenous deracinated neutered world that offers no basis of resistance.

It explains why in a time of supposed security danger, the southern border of the US is practically porous. The bankers want to undermine America’s European character, which it perceives as a threat.

It explains the carte blanche Israel receives, the war on Iraq, and the fact that there is no opposition to the war in the mainstream parties or press. This war desecrates a cradle of civilization and assails Islam. It is also an opportunity to create more debt and enrich the bankers and their corporate allies.

It explains 9-11, the Patriot Repression Act and the phoney “War on Terror.”

It explains the depraved mass media and stupefying education system. I could go on but you get the picture. We are krill at the mercy of a gigantic whale. At the very least, let’s not waste energy thinking we live in a free and open society.

Our democracy is a ruse. Ostensibly it expresses the aspirations of the people. In reality, it masks the insidious anti-human agenda of the central bankers.