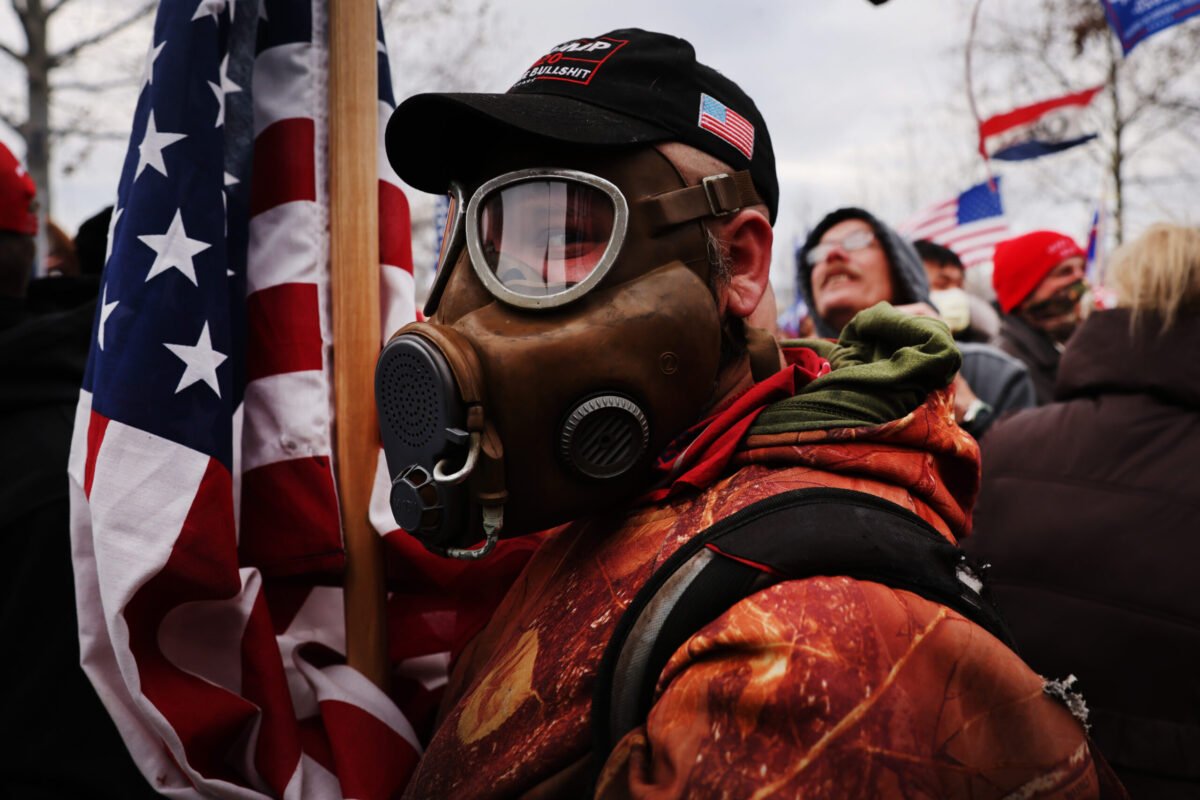 World leaders reacted with shock and dismay to the storming of the US Capitol by supporters of US President Donald Trump, protesting congressional certification of President-elect Joe Biden’s electoral victory, Anadolu Agency reports.

“Shocking scenes in Washington, D.C. The outcome of this democratic election must be respected,” said NATO Secretary General Jens Stoltenberg on Twitter.

British Prime Minister Boris Johnson called the events “disgraceful” and said the US “stands for democracy around the world and it is now vital that there should be a peaceful and orderly transfer of power.”

Criticized for a belated reaction, after midnight local time French President Emmanuel Macron posted a video on Twitter, describing the scene of violence in Washington, D.C. as “not American.”

READ: Trump’s incitement led to the chaos on Capitol Hill, but democracy must prevail

“I am following with concern the news that are coming from Capitol Hill in Washington. I trust in the strength of America’s democracy,” said Spanish Prime Minister Pedro Sanchez. “The new Presidency of Joe Biden will overcome this time of tension, uniting the American people.”

German Foreign Minister Heiko Maas said on Twitter: “Trump and his supporters should finally accept the decision of the American voters and stop trampling democracy.”

Drawing on the German history of mob violence in the 1930s, he added: “Enemies of democracy will be happy to see these inconceivable images in Washington DC. Incendiary words become violent acts — on the steps of the Reichstag, and now in the Capitol. Contempt of democratic institutions has devastating ramifications.”

Austrian Chancellor Sebastian Kurz said he was “shocked” by scenes from the US and said “this is an unacceptable assault on democracy. A peaceful and orderly transfer of power must be ensured.”

Austrian President Alexander Van der Bellen said on social media that he is following “with deep concern the populist prodded, anti-democracy attack on the Capitol in Washington, the heart of US democracy.”

“The respect for the results of free elections and the peaceful transfer of government power is the foundation of democracy. I am convinced the US will protect these democratic rules even if the current president hesitates,” he added.

– ‘Attack on freedoms of US people’

Mark Rutte, the Dutch prime minister, urged Trump to “recognize Joe Biden as the next president today” after weeks of refusing to do so.

Italian Prime Minister Giuseppe Conte said he is also following the events in the US with great concern.

“Violence is incompatible with the exercise of political rights and democratic freedoms. I trust in the solidity and strength of the institutions of the United States,” he said.

Luigi Di Maio, Italy’s foreign minister, called the developments in Washington “a real disgrace to democracy, an attack on the freedoms of the American people.”

“We strongly condemn all forms of violence, in the hope that there will be an orderly and peaceful transfer of power as soon as possible,” he said.

Charles Michel, the head of the EU Council, said: “The US Congress is a temple of democracy. To witness tonight’s scenes in Washington DC is a shock. We trust the US to ensure a peaceful transfer of power to Joe Biden.”

A protester screams “Freedom” inside the Senate chamber after the U.S. Capitol was breached by a mob during a joint session of Congress on January 06, 2021 in Washington, DC [Win McNamee/Getty Images]

Israel’s Defense Minister Benny Gantz on Twitter said the pictures from Washington “hurt the hearts of everyone who believes in democracy.”

“I did not believe I would see such pictures in the most powerful democracy in the world. This is proof that before political rivalry, we must agree on the rules of the game: Maintaining the rule of law, respecting democratic procedures and respectful discourse. I hope the horrific event comes to an end soon, and without any casualties,” he added.

Israeli Foreign Minister Gabi Ashkenazi said: “I was shocked to see last night’s attack on the US Congress, the stronghold of world democracy, and I strongly condemn it.”

“Since its independence, America, our great and true friend, has been a beacon of democracy, and stood for the values of freedom, justice and independence,” Ashkenazi added.

Iranian President Hassan Rouhani said Thursday that the storming of the US Congress building by supporters of Trump “proved that the Western democracy lacks the proper assets,” according to the official Iranian News Agency.

“Trump, as a populist figure, has damaged America’s reputation,” said Rouhani, who wished the events would serve as a “lesson” for the whole world and future US presidents.

He urged the incoming White House administration to restore “the American people to the level that befits them and based on the requirements of the international community.”

Iranian Foreign Minister Javad Zarif criticized Trump, who is accused of provoking protesters who entered the Congress building in Washington.

“A rogue president who sought vengeance against his OWN people has been doing much worse to our people—and others—in the past 4 years,” Zarif said on Twitter.

Trump’s “unchecked authority to start a nuclear war” is a security concern for the entire international community, he added.

Ali Shamkhani, the secretary-general of the Iran’s Supreme National Security Council, pointed out the calls by some US senators for the removal of Trump from his office.

Shamkhani, in a statement, criticized some groups in Iran who wanted negotiations with the US during Trump’s term in office.

“Trump’s mental health was questioned in the 2016 election. Following the events in Washington, some senators demanded Trump’s dismissal, based on the US Constitution’s 25th Amendment, for the same reason. What will be the response of those who talk about negotiations and agreements with this madman?”, he said.

“In the eyes of the world, American democracy tonight appears under siege. This is an unseen assault on US democracy, its institutions and the rule of law. This is not America. The election results of 3 November must be fully respected,” he said.

“I commend the words of President-elect Joe Biden. The strength of US democracy will prevail over extremist individuals.”

Ursula von der Leyen, the president of the European Commission, said on Twitter: “I believe in the strength of US institutions and democracy. Peaceful transition of power is at the core.”

She added: “Joe Biden won the election. I look forward to working with him as the next President of the USA.”

“The US rightly takes great pride in its democracy, and there can be no justification for these violent attempts to frustrate the lawful and proper transition of power,” said British Foreign Secretary Dominic Raab.

‘Democratic process must be respected’

“President Trump and many members of Congress have a great responsibility for what is happening now. The democratic process of electing a president must be respected,” he said.

Norwegian Foreign Minister Eriksen Soreide called the events “disturbing, alarming, and an unacceptable attack on democracy”, and said Trump has the “responsibility to ensure that the situation comes under control.”

“The Congress must be able to fulfill its mandate in accordance with the constitution. It is at the very core of a democratic society that the losing party acknowledges the defeat,” she added.

A pro-Trump protester carries the lectern of U.S. Speaker of the House Nancy Pelosi through the Roturnda of the U.S. Capitol Building after a pro-Trump mob stormed the building on January 06, 2021 in Washington, DC [Win McNamee/Getty Images]

“Very worrying scenes from Washington DC, I am confident that democratic institutions and principles of the rule of law will prevail,” said Edagars Rinkevics, Latvia’s foreign minister.

French Foreign Minister Jean-Yves Le Drian condemned the riots and said the will and vote of the American people must be respected.

“Violence against American institutions is a serious attack on democracy,” he added.

Danish Foreign Minister Mette Frederiksen said on social media: “Extremism, violence, polarization and chaos are never the way forward. Horrifying pictures from Washington. May democracy be made to work again.”

“Democracy rests on a peaceful transfer of power: when you lose you must accept defeat,” said Spanish Foreign Minister Arancha Gonzalez, voicing his “full trust in President elect” Biden.

Turkey also urged all parties in the US to use moderation and common sense.

“We are following with concern the internal developments happening in the U.S. following the Presidential elections which culminated in the Capitol Hill building being breached by protesters today,” the Turkish Foreign Ministry said in a statement.

“We follow the events in the USA with concern and invite the parties to calmness,” Turkey’s Parliament Speaker Mustafa Sentop said on Twitter.

“We believe that problems will always be solved within law and democracy.”

He added: “As Turkey, we have always been in favor of the law and democracy and we recommend it to everyone.”

On Wednesday, supporters of Trump protesting Congress’ certification of Joe Biden’s presidential win clashed with police, eventually breaching the Capitol building and making their way to the Senate floor.

At least four people died after the protesters breached the building, including one woman shot by Capitol Police.

Democratic and Republican lawmakers have unanimously condemned the assault on the Capitol by the people and called the riots a “coup”, “despicable act of terrorism” and “national embarrassment” in separate statements.

Trump, his political allies and millions of Republican citizens have for months claimed that the Nov. 3 election was rigged. 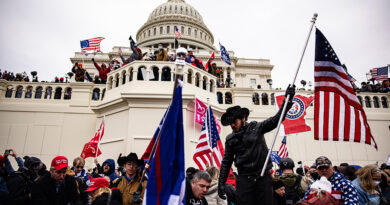 January 6 riot defendant acquitted by court on all charges; federal judge convinced defendant was let in freely by police