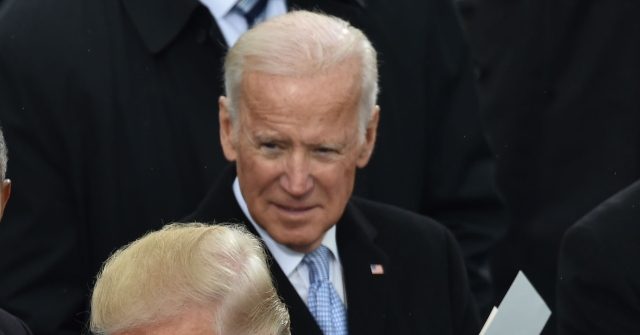 President-elect Joe Biden said Friday that he agreed with President Donald Trump’s decision not to attend his Inauguration but said that Vice President Mike Pence was welcome.

“One of the few things he and I have ever agreed on,” he replied when asked by reporters about Trump’s announcement Friday that he would not attend the inauguration ceremony. “It’s a good thing — him not showing up.”

Biden said that Trump had “exceeded even his worst notions” about his character.

“He’s been an embarrassment to the country. Embarrassed us around the world. Not worthy to hold that office,” Biden said about Trump.

But Biden said that he would welcome Vice President Mike Pence to the ceremony, citing the importance of maintaining the historical precedence of the transfer of power.

“Mike, the vice president, is welcome to come, I’d be honored to have him there,” Biden said, but added that he had not spoken to Pence.

The President-elect said that if Trump still had six months in office, he would support any effort to remove him from office, but that with only 13 days left, he would focus only on getting inaugurated and getting to work right away.

“It is time for him to go,” Biden said, adding, “The quickest way that that will happen is us getting sworn in.”

Biden said his effort to heal the nation would be easier after the riots on Capitol Hill, revealing that many Republican leaders expressed their disgust with Trump’s actions in recent weeks.

“What this president has done has ripped the band-aid all of the way off, to let the country know who he is, what he’s about, and how thoroughly unfit for office he is,” he said.