A poll has found that 74% of Americans say they are willing to get a COVID vaccination passport, should they be introduced in the U.S.

Travel news website The Vacationer revealed the findings after polling 520 Americans over the age of 18, with a error margin of under 5%.

Those surveyed were asked “If required for travel, would you agree to a COVID-19 Vaccine Passport or App so airlines and border authorities can check your vaccination status and COVID-19 test results?”

Almost three quarters responded that they would be willing to submit to having such a document in order to travel and gain access to basic services.

The poll found that men are almost 8% more likely than women to agree to a COVID-19 vaccine passport, with 77.73% of males willing to get one, compared to 69.96% of women.

The Vacationer notes that “based on the current census, the 74% figure represents nearly 188 million Americans aged 18 or older.”

“Three out of every four people would agree to documentation telling airlines and authorities their vaccine status and test results,” the websites notes, adding that “in an era of privacy concerns, this is an astoundingly high percentage.”

A recent report from NTD, explains how the WHO is being rejected for an investigation into the origins of COVID in China.

Following up, the poll asked if Americans were willing to take the vaccine if it was a requirement to do things specifically related to travel.

In each instance a majority said they would take the shot if being allowed to engage in the following activities depended on it: 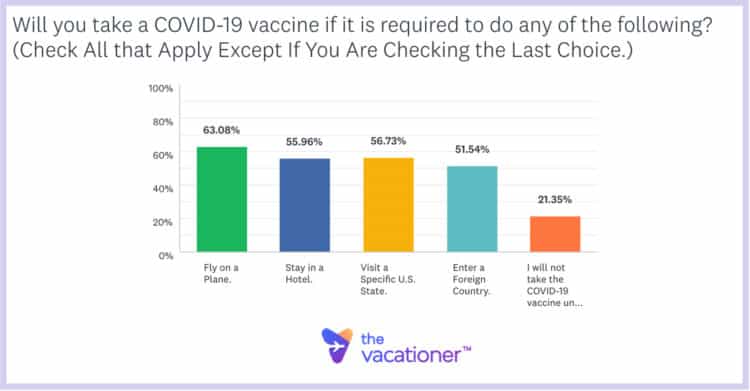 However, when asked if they trust the vaccination enough to travel to high risk areas, a majority of 56% said no:

The spectre of so called ‘immunity passports’ is looming globally.

Several European countries have already announced the rollout of vaccine passports, with the EU considering a bloc wide ‘standardised’ program.

Having left the EU, Britain would not be part of any standardised European scheme, however it has now confirmed that it is rolling out vaccine passports, despite previous denials that it would do so.

Recently, the government in Ontario, Canada admitted that it is exploring ‘immunity passports’ in conjunction with restrictions on travel and access to social venues for the unvaccinated.

Last month, Israel announced that citizens who get the COVID-19 vaccine will be given ‘green passports’ that will enable them to attend venues and eat at restaurants.

A litany of other government and travel industry figures in both the US, Britain and beyond have suggested that ‘COVID passports’ are coming in order for ‘life to get back to normal’.

As Tech Companies Purge Users, Here Are Some Alternatives