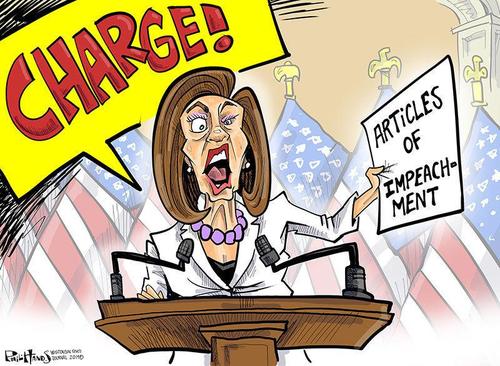 Speaker Nancy Pelosi ramped up the attacks on members of her own house this week, accusing them of giving “aid and comfort” to those who want to destroy the nation.

The comments came after Rep. Lauren Boebert, R-Colo., denied a public accusation by Rep. Steve Cohen, D-Tenn., that she personally took rioters around the capitol for a tour before the attack on January 6th.  Boebert pointed out that the “rioters” were her family members and she has never given such tours. Rather than encouraging colleagues to avoid baseless and inflammatory accusations pending review of what occurred on January 6th, Pelosi threw gasoline on the fire and accused her colleagues of giving “aid and comfort” to those who were trying to destroy the Constitution and the country.  It is, in my view, another failure of leadership by the Speaker in her duties to the institution as a whole.

Like many, I support a commission to look into how these rioters gained such rapid entry into the Capitol Hill.  However, Democratic members have claimed that Republican members were actual co-conspirators in the riot in supplying access to the building to plan out the attack. Rep. Mikie Sherrill (D., N.J.) went public with an extraordinary allegation against some of her colleagues that they conducted secret surveillance in a conspiracy with rioters at the Capitol. Sherrill stated in a Facebook live address to her constituents that she witnessed the surveillance personally. She said unidentified members of Congress “had groups coming through the Capitol” in “a reconnaissance for the next day.”

Sherill has still not supplied any of the names of her colleagues to who worked as inside co-conspirators. As noted earlier, this is an unambiguous allegation of criminal conduct against colleagues.  Either members were conspiring in a crime or Sherill unfairly defamed her colleagues. Article I, Section 5, the Constitution says, “Each House (of Congress) may determine the Rules of its proceedings, punish its members for disorderly behavior, and, with the concurrence of two-thirds, expel a member.”  The House may discipline members for violations of both unlawful conduct as well as any conduct which the House of Representatives finds has reflected discredit upon the institution. In re Chapman, 166 U.S. 661, 669-670 (1897). A House Select Committee in 1967 stated:

Censure of a Member has been deemed appropriate in cases of a breach of the privileges of the House. There are two classes of privilege, the one, affecting the rights of the House collectively, its safety, dignity, and the integrity of its proceedings; and the other, affecting the rights, reputation, and conduct of Members, individually. Most cases of censure have involved the use of unparliamentary language, assaults upon a Member or insults to the House by introductions of offensive resolutions, but in five cases in the House and one in the Senate [as of 1967] censure was based on corrupt acts by a Member, and in another Senate case censure was based upon noncooperation with and abuse of Senate committees.

If members did conspire as alleged by Rep. Sherrill, they could be expelled for that criminal act.  They would also face prosecution.  It would be a betrayal of not just Congress but the country.

One would think that this rising level of acrimony would prompt a Speaker to calm her members and call for an investigation. Speaker Pelosi however proceeded to ramp up the rhetoric. She started out well by stating, “You have to have evidence for what has happened.” She then took a shot at Republicans and stated:

“There is no question that there were members in this body who gave aid and comfort to those with the idea that they were embracing a lie — a lie perpetrated by the president of the United States that the election did not have legitimacy.”

The language comes from the treason language in the Constitution Article III, Section 3 states:

“Treason against the United States, shall consist only in levying War against them, or, in adhering to their Enemies, giving them Aid and Comfort.”

In the context of alleged criminal conspiracy by members, the use of this language clearly suggested members were more than just politically at fault for their positions. It suggested that they were traitors.

These attacks are coming as some members are calling for the possible expulsion of members for challenging the electoral votes, an act expressly allowed under federal law and repeatedly done by Democrats in prior elections.  It is an example of the rage-filled politics that continues to build in our country, including calls for blacklists and punitive measures against anyone deemed supportive of Trump.  As I noted in today’s column, it is a crisis of leadership in this country when we desperately need leaders who can unite us rather than capitalize on our divisions.