KANSAS CITY, Kansas, February 16, 2021 (LifeSiteNews) — President Joe Biden must “stop defining himself as a devout Catholic” on account of his pro-abortion activism, said Kansas Archbishop Joseph Naumann in a recent interview, adding that the U.S. bishops “need to correct” the president for “acting contrary to the Catholic faith.”

Naumann made these comments when asked by Catholic World Report in a Feb. 13 interview how America’s bishops ought to respond to Biden professing himself to be a devout Catholic while being 100 percent pro-abortion.

“I can tell you how this bishop is responding,” he said. “The president should stop defining himself as a devout Catholic, and acknowledge that his view on abortion is contrary to Catholic moral teaching. It would be a more honest approach from him to say he disagreed with his Church on this important issue and that he was acting contrary to Church teaching.”

“When he says he is a devout Catholic, we bishops have the responsibility to correct him. Although people have given this president power and authority, he cannot define what it is to be a Catholic and what Catholic moral teaching is,” he continued.

“What he is doing now is usurping the role of the bishops and confusing people. He’s declaring that he’s Catholic, and is going to force people to support abortion through their tax dollars. The bishops need to correct him, as the president is acting contrary to the Catholic faith,” he added.

The Kansas City archbishop, who serves as chairman of the U.S. Conference of Catholic Bishops (USCCB) Committee on Pro-Life Activities, added later in the interview that Biden “has the responsibility not to present himself for Holy Communion.”

“When Catholics receive the Eucharist, they are acknowledging the Real Presence of Jesus, and also belief in the teachings of the Church. President Biden doesn’t believe in the Church’s teachings on the Sanctity of Human Life, and he should not put the priest in the situation where he has to decide whether or not to allow him to receive the Eucharist. He should know that after 78 years as a Catholic,” he said.

Biden has identified himself as a devout Catholic despite working to expand abortion, an act that the Catholic Church condemns as a “moral evil” that is “gravely contrary to the moral law.” In his first two weeks in office, Biden pledged to make abortion available to “everyone” by “codifying” the 1973 Supreme Court decision Roe v. Wade, which imposed abortion on all 50 states. During that same time, he also revoked the Mexico City policy that blocks federal funds from going to non-governmental organizations (NGOs) that provide or promote abortions overseas. Democrats have also pledged to eliminate the pro-life Hyde Amendment that prohibits federal funds from going to pay for abortions in programs like Medicaid.

On Biden’s Jan. 20 Inauguration Day, USCCB president Archbishop José Gomez warned in an open letter that Biden’s pledge to pursue anti-life and anti-family policies would advance “moral evils” in the areas of “abortion, contraception, marriage, and gender.” Gomez said that bishops “must continue to speak to President Biden, as well as all Catholics, and even all Americans, about the truth of what abortion is,” namely, “the intentional killing of a child.”

Not all U.S. bishops, however, were on board with Gomez’s approach to the scandal of having a president who calls himself Catholic while advancing the murder of preborn children. Cardinal Blase Cupich of Chicago called the open letter “ill-considered.” Bishop Robert McElroy of San Diego went as far as stating that abortion should not be used as the “de facto litmus test” in determining whether a Catholic politician is a “faithful Catholic.” McElroy also said that denying communion to a pro-abortion Catholic politician could only be interpreted as a “weaponization of the Eucharist.”

But San Francisco Archbishop Salvatore Cordileone said that any decision to deny Holy Communion to publicly pro-abortion Catholic politicians, such as President Biden or House Speaker Nancy Pelosi, would not be “tied to politics” but would ultimately be about “protecting” the sacrament while helping such a person move toward repentance.

Catholics in public life who are “favoring something that is gravely evil,” the Archbishop said, are engaging in something “that’s seriously sinful,” and puts them in a situation where they “need to confess that sin and be absolved before presenting themselves for communion,” he told EWTN in a Feb. 4 interview.

Share on TwitterShare on FacebookShare on WhatsAppShare on RedditShare on PinterestShare on LinkedInShare on TelegramShare on PocketShare on Email
Tags: USA, Abortion, Catholic Church, Politics - U.S., 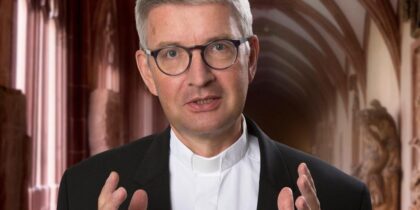