You’ve likely used rosemary (Rosmarinus officinalis) in your own kitchen (or tasted it in a restaurant meal if you don’t cook). After all it is one of the most commonly used herbs worldwide for cooking. But did you know that rosemary essential oil is considered one of the most powerful essential oils in the world with a multitude of health-promoting benefits? Rosemary has shown to be hepatoprotective (protective to the liver), and to have anti-diabetic, anti-microbial, anti-inflammatory, antioxidant and anticancer properties.

The name rosemary comes from the Latin words “Ros” meaning dew or mist, and “marinus” meaning sea. Wild rosemary often grows on the sea cliffs in Spain, France, Greece, and Italy. Together with lavender, basil, oregano, and a few other herbs, it is part of the mint family. While you may have a small pot of rosemary on your windowsill, it is a perennial bush that outside can grow to be five feet high. Rosemary grows best in temperate climates where the temperature doesn’t dip below zero degrees Fahrenheit (-17 degrees Celsius).

Rosemary Has Been Valued Through the Ages

Long considered to be advantageous for memory improvement, ancient Greek students wore garlands of rosemary on their heads when studying. The Greeks and Romans used rosemary as a part of almost all festivals and feasts − it was a reminder of the cycle of life and death.

Charlemagne, who ruled a wide area of Western Europe from 768-814, thought so highly of rosemary that he ordered it to be grown on his farms.

Hildegard of Bingen (1098-1179), German abbess, musician, herbalist, and healer (among other accomplishments) wrote several medical texts describing the action of various herbs. Rosemary is amongst those she studied and wrote about.

Rosemary was used in traditional Turkish folk medicine to treat hyperglycemia and indeed, modern research is finding that it may have applications for diabetes.

During the time when the Black Death (bubonic plague) raged in the mid-1300s, branches of rosemary were scattered on the floors and doorways of homes to help ward off the disease. Rosemary was also part of something called “Marseilles Vinegar” or “Four Thieves Vinegar.” This was used by thieves and grave robbers to protect themselves against the plague as they went about the grisly but lucrative business of robbing the dead.

Rosemary was often used as a disinfectant to kill germs in the 16th century, although people of that time didn’t understand the concept of germs. They just knew that if rosemary was burned in the sickroom or applied as a balm or an oil to a sick person, they tended to get better quickly. Paracelsus, a notable physician, philosopher, and herbalist in the 16th century, considered rosemary an essential component in his medicines.

Have you ever been to a funeral and someone handed you a sprig of rosemary to wear? This is a long-held tradition which is meant to indicate that the loved one who has passed will not be forgotten. It dates back to ancient Roman and Greek times when rosemary was tossed into the grave as a sign of remembrance.

Rosemary essential oil contains some very potent phytochemicals (natural, plant based chemicals) which are steam distilled from the needle-like leaves of the plant. It takes 100 pounds (45.3 kg) of rosemary to yield one pound (453 grams) of essential oil.

Somewhere between 400-500 phytochemicals have been found in rosemary essential oil, making it an exceptional source of different bioactive compounds. The major constituents are 1,8-Cineole, camphor, alpha-pinene, beta-pinene, camphene, borneol, betulinic acid, limonene, carnosic acid, carnosol, rosmanol, and rosmarinic acid. While these names might not sound like much, each one translates into potential benefits for your health.

Modern research is discovering that rosemary has some very important applications for our health. Here is a rundown on six of its most impressive uses and benefits:

1. Decreases Cortisol Levels. A small 2007 study published in Psychiatry Research by Japanese researchers found that five minutes of breathing in rosemary and lavender helped to decrease salivary cortisol levels in 22 healthy volunteers. Cortisol, released in response to stress by the adrenal glands, is sometimes referred to as the “stress hormone.” These same researchers also observed that the antioxidants in both rosemary and lavender essential oils enhanced the body’s free radical scavenging ability.

2. Inhibits Deadly Bacteria. Rosemary has long been used to improve skin by fighting bacteria and by cell renewal. A 2016 study done by Egyptian researchers appearing in Journal of Photochemistry and Photobiology found that rosemary essential oil was able to significantly inhibit Pseudomonas aeruginosa. This is a gram-negative, multi-drug resistant pathogen associated with serious illnesses like ventilator-associated pneumonia and other sepsis conditions. Also, a 2015 study done by Brazilian researchers, released in Frontiers in Microbiolog found that both rosemary and oregano essential oils had strong antimicrobial activity against Staphylococcus aureus. This is another deadly bacterium, better known as golden staph, also considered to be multi-drug resistant.

A study reported in 2012 by Chinese researchers, published in the journal Molecules, looked at the antibacterial activity of rosemary essential oil. They examined the main constituents of the oil − 1,8-cineole, alpha-pinene and beta-pinene − and compared the antibacterial activity of each constituent to the action of rosemary as a whole. They found that the whole essential oil was more powerful than the constituents on their own (no surprise really!).

4. Fights Cancer. Dozens of research studies have been done on rosemary for its various phytochemicals and applications for cancer. One American study in particular on carnosol, appearing in the June 2011 edition of Cancer Letters, stated that carnosol appeared to be well tolerated in animal studies and that it has selective toxicity toward cancer cells versus healthy cells.

5. Aids Hair Regrowth. Rosemary has been used traditionally for combatting hair loss. Researchers, comparing it with minoxidil (a commonly used drug for combating hair loss) found rosemary essential oil to be just as good as minoxidil (after 6 months of use). The study was released in 2015 in the journal SkinMed.

6. Assists Brain Health. Rosemary has long been revered for its ability to help overcome mental fatigue, improving mental clarity and focus. Now, Japanese researchers have shown that rosemary can do more than that. The research, published in 2015 in Neuroscience Research stated that carnosic acid (one of rosemary’s phytochemicals) has neuroprotective functions in brain cells. They said carnosic acid “served as an activator for neuroprotective and neurotrophic functions in brain cells.” They also stated it may be helpful in the prevention of Alzheimer’s Disease. 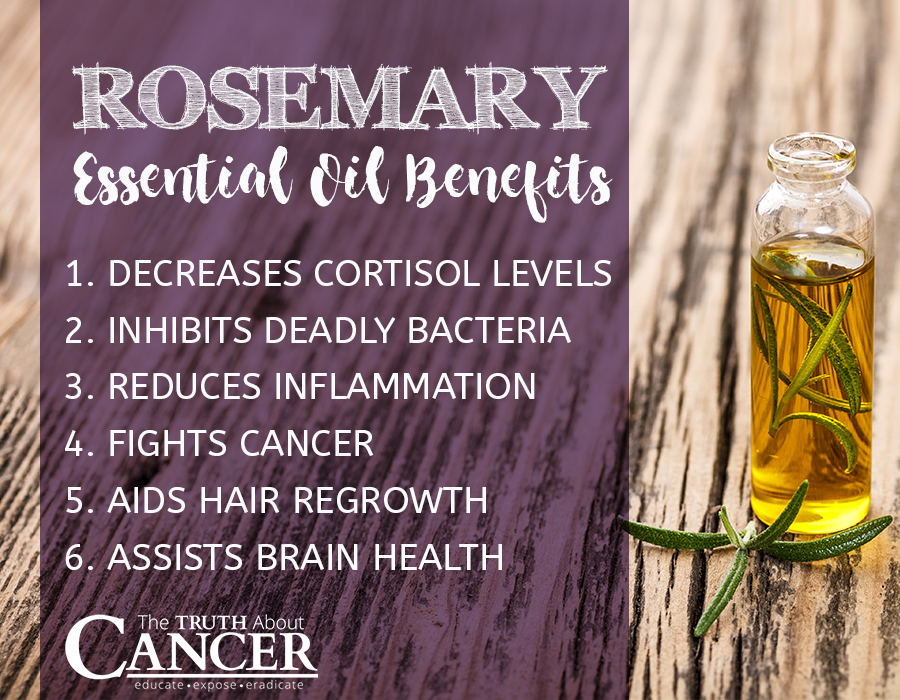 It’s important to be aware that the quality of essential oils varies widely among manufacturers. Thus, it requires you to discover whether the supplier of the brand of essential oil you wish to use employs organic growing methods, knows how to properly distill the oils, and does not use toxic chemicals to create their oils. You can’t just read the labels and assume that “100 percent pure” means that the oil is medicinal grade. Make sure to ask questions. Buy your oils from a reputable source because otherwise they could be adulterated with toxic chemicals.

Do not apply essential oils inside ears, anywhere near the eyes, or other sensitive areas of the body.

If you have sensitive skin, dilute rosemary essential oil prior to application using an organic carrier oil such as almond, coconut, jojoba, olive, or hemp.

If you want the equivalent of a college level education on essential oils, get your copy of Essential Oils: Ancient Medicine by Dr. Josh Axe, Jordan Rubin, and Ty.

In this 500+ page full-color book, you’ll get expert tips and secrets to healing with this Biblical medicine. It also includes a step-by-step guide to using more than 50 top essential oils.

Editor’s Note: This article was initially published in November 2016 and has been updated in February 2021. 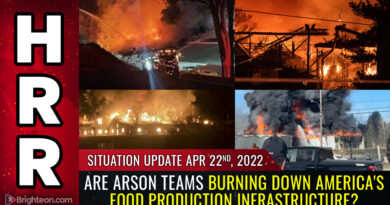 No One Can Tolerate Permanent Fever, High Antibodies