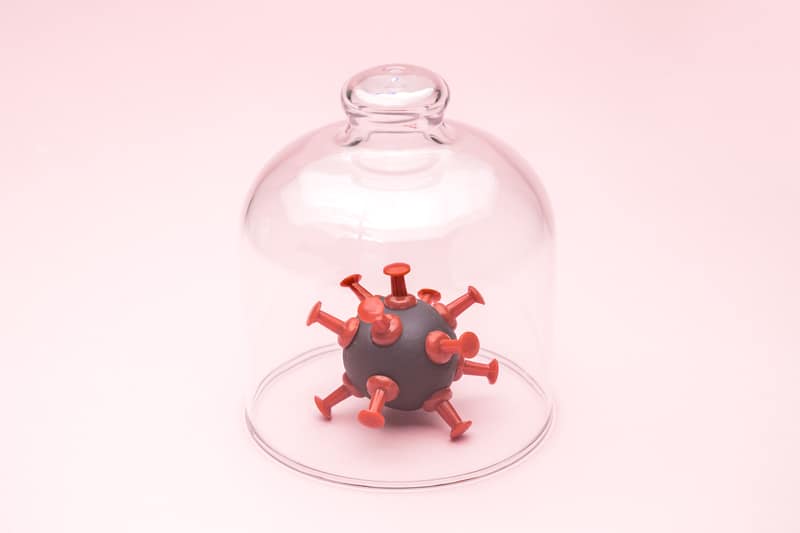 Above: what has never happened and seemingly never will: true virus isolation. SARS variants, spike proteins and more all rest on 1 big fat assumption: that SARS-CoV-2 exists. But we are still without proof of that.

Without virus isolation, the SARS variants

brainwashing theme is being increasingly pushed by the NWO (New World Order) social engineers to prop up the pandemic. With more people becoming aware that there is no emergency and there is no pandemic, the COVID manipulators are propagating more lies by inventing SARS variants and using them as fuel to continue the scamdemic. Apparently, there are now South African, UK and Californian variants of which you need to be very afraid. However, whether it’s new variants, spike proteins or other SARS-CoV-2 paraphernalia, all of these stories depend on a basic assumption: that a new virus SARS-CoV-2 exists. You can’t have variants of a virus that doesn’t exist. You can’t have spike proteins on a virus that doesn’t exist. Likewise, you can’t make a true traditional vaccine (not the gene editing devices of Pfizer and Moderna) of a virus that doesn’t exist. So we keep coming back to the same point: SARS-CoV-2 has never been isolated or purified, and thus so much of the current reporting about it is disinformation that cannot be true.

As always, Dr. Tom Cowan and Dr. Andrew Kaufman (whom I have quoted extensively in previous articles such as this one and this one) shine light on the true state of affairs. According to them, no true isolation of a virus has EVER happened, either for SARS-CoV-2 or other viruses like HIV. In a recent discussion, they talk about the lack of scientific evidence for the proof of viruses alleged to cause disease in the context of a recently aired debate between Dr. Judy Mikovits and Kaufman. The discussion became a little tense as Kaufman prodded Mikovits to explain how she had ever isolated a virus (as she claims to have repeatedely done), when all she had done was show viruses budding out of the cell (not true isolation). Mikovits replied it had to be that way for retroviruses, because the human body would eat up loose RNA or DNA. Mikovits did however agree and explicitly state that SARS-CoV-2 had never been isolated.

Cowan makes the following point around the 16-minute mark about virus isolation:

Kaufman brings up an interesting jaguar analogy around the 26-minute mark. Imagine a European explorer had heard of new wild cats/leopards in the South American jungle, and set out to find one. Since they are stealthy predators, he could not find one, but instead found some teeth. Would that count as proof of a new wild cat (a jaguar)? A scientist claiming discovery a new virus, amidst all the millions of tiny particles that swim around in our cells and bloodstream, is like a European explorer visiting South America for the first time and claiming he found a jaguar just because he found the tooth of a wild cat, despite not having found the skeleton or body of it. Why does a tiny piece of RNA count as proof of an alleged novel virus SARS-CoV-2?

Cowan, Kaufman and Sally Fallon Morell have together written a short document entitled Statement On Virus Isolation (SOVI) where they definitively explain that, according to “common sense, the laws of logic and the dictates of science,” the alleged SARS-CoV-2 virus has never been isolated or purified. The word isolation is often defined differently by virologists trying to justify their methods (adding it to other media like milk and bovine serum, plus mixing it with chemicals like antibiotics). The SOVI statement includes the Oxford definition of the word isolation: “the action of isolating; the fact or condition of being isolated or standing alone; separation from other things or persons; solitariness.” Therefore, logically, these points follow:

The writers then outline how a person would isolate the virus if they were being scientifically rigorous and careful:

“In as concise terms as possible, here’s the proper way to isolate, characterize and demonstrate a new virus. First, one takes samples (blood, sputum, secretions) from many people (e.g. 500) with symptoms which are unique and specific enough to characterize an illness. Without mixing these samples with ANY tissue or products that also contain genetic material, the virologist macerates, filters and ultracentrifuges i.e. purifies the specimen. This common virology technique, done for decades to isolate bacteriophages and so-called giant viruses in every virology lab, then allows the virologist to demonstrate with electron microscopy thousands of identically sized and shaped particles. These particles are the isolated and purified virus.

These identical particles are then checked for uniformity by physical and/or microscopic techniques. Once the purity is determined, the particles may be further characterized. This would include examining the structure, morphology, and chemical composition of the particles. Next, their genetic makeup is characterized by extracting the genetic material directly from the purified particles and using genetic-sequencing techniques, such as Sanger sequencing, that have also been around for decades. Then one does an analysis to confirm that these uniform particles are exogenous (outside) in origin as a virus is conceptualized to be, and not the normal breakdown products of dead and dying tissues. (As of May 2020, we know that virologists have no way to determine whether the particles they’re seeing are viruses or just normal break-down products of dead and dying tissues.)”

That is how it would be done to ensure proper virus isolation. However what has happened since the outbreak of the COVID scamdemic is scientific fraud over and over and over again:

“Instead, since 1954, virologists have taken unpurified samples from a relatively few people, often less than ten, with a similar disease. They then minimally process this sample and inoculate this unpurified sample onto tissue culture containing usually four to six other types of material — all of which contain identical genetic material as to what is called a “virus.” The tissue culture is starved and poisoned and naturally disintegrates into many types of particles, some of which contain genetic material. Against all common sense, logic, use of the English language and scientific integrity, this process is called “virus isolation.” This brew containing fragments of genetic material from many sources is then subjected to genetic analysis, which then creates in a computer-simulation process the alleged sequence of the alleged virus, a so called in silico genome. At no time is an actual virus confirmed by electron microscopy. At no time is a genome extracted and sequenced from an actual virus. This is scientific fraud.

The observation that the unpurified specimen — inoculated onto tissue culture along with toxic antibiotics, bovine fetal tissue, amniotic fluid and other tissues — destroys the kidney tissue onto which it is inoculated is given as evidence of the virus’ existence and pathogenicity. This is scientific fraud.”

Let’s return to what Mikovits said, and what many mainstream virologists say: we can’t isolate viruses from their host cell because there’s not enough of them, they’re too small or they would immediately die if we did so (and therefore must be found within the host cell). So mainstream virology redefines what isolation means when it comes to viruses. Cowan has countered this point repeatedly:

“From now on, when anyone gives you a paper that suggests the SARS-CoV-2 virus has been isolated, please check the methods sections. If the researchers used Vero cells or any other culture method, you know that their process was not isolation. You will hear the following excuses for why actual isolation isn’t done:

If No. 1 is correct, and we can’t find the virus in the sputum of sick people, then on what evidence do we think the virus is dangerous or even lethal? If No. 2 is correct, then how is the virus spread from person to person? We are told it emerges from the cell to infect others. Then why isn’t it possible to find it?”

Predictably, both the WHO and the CDC are pushing the idea that imaginary variants of an imaginary virus are breaking out worldwide. They are even giving these so-called variants technical names: the supposed UK variant is called B.1.1.7, the supposed Brazil variant is called P.1 and the supposed California variant is B.1.427 and B.1.429 (aka CAL.20C/L452R). The supposed South African variant is B.1.351 or 501Y.V2, allegedly due to its N501Y mutation. N501Y is scientific shorthand for the substitution of one protein building block (amino acid) for another at position 501 in the part of the virus called the spike protein. Speaking of spike protein, we all have all been told since the start of this fake pandemic that this is what made the SARS-CoV-2 virus so deadly, but remember: the spike protein is part of the digital, in silico, computer database genome of the virus. They could have made up anything. There is no proof of a real virus with a real spike protein. It’s more technical gobbledygook to give the virus the appearance of existence and reality when it DOES NOT EXIST.

Once this concept is fully grasped, the implications are quite astounding. Even people who have done a great job speaking out against the COVID scamdemic – people like Dr. James Lyons-Weiler and Dr. Judy Mikovits (who deserve kudos for their courage) – are basing their conclusions on the idea that the virus exists when it simply does not. Lyons-Weiler has written scientific papers on the idea of pathogenic priming but that idea is based on the premise of an existing virus whose genome has been actually sequenced from a real life specimen, as opposed to a computer-generated theoretical sequence.

The Vaccine Can’t Possibly Work, Because It’s Based on an In Silico, Theoretical Virus

Vaccines are dangerous inventions, but even if you are pro-vax, the COVID vaccines can’t possibly work (the traditional ones not the mRNA ones) because the Big Pharma manufacturers never had a real viral specimen to use to develop them. They are using a theoretical virus as their starting point. This makes all the COVID vaccines even less desirable, and lowers their benefit-to-risk ratio to 0.

It is a famous maxim of life that you can know the tree by its fruits. Thus, if the root of a tree is poisoned, so shall be its fruit. The foundational structure of the entire COVID narrative is not just shaky but indefensible scientific fraud. Without virus isolation, the additional permutations of the COVID narratives are just more stories of no substance. By now, many people have awoken to the truth that there is not one virus, not one disease called COVID (which is essentially just reclassification of existing disease) and not one cause of that disease. Why would we assume that a deadly “virus” is the only cause of disease – not poor hygiene, poor sanitation, toxic elements, pollution, EMFs (5G), pesticides, synthetic chemicals, stress, emotional imbalance, lack of adequate exercise and deficiency of vital nutrients like vitamins B, C or D? We must keep attacking the entire narrative at its base in order to uncover the truth.

Makia Freeman is the editor of alternative media / independent news site The Freedom Articles, author of the book Cancer: The Lies, the Truth and the Solutions and senior researcher at ToolsForFreedom.com. Makia is on Steemit and Parler.

Riccado Bosi calls on all Australians to get to Canberra now, this is our last chance to fix the mess

You Have No Obligation To Conform To A Wildly Sick Society