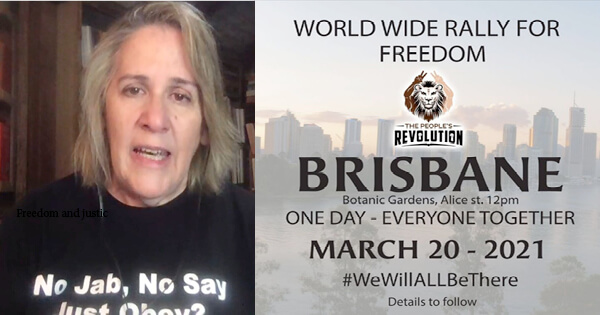 We are the most likely to succeed when we remember why we’re here and when we are all aiming for a common goal – Freedom and justice. Not just for us, for this one cause. I look forward to sharing that future with all of us here, our families and our society as a whole. Let’s make it happen!

Meryl Dorey, the founder of the Australian Vaccination-risks Network (AVN) joined the millions of people around the world demonstrating in favour of freedom and justice on Saturday March 20, 2021. Please read her inspirational words spoken at the Brisbane rally on Saturday 20th March, 2021.

You can’t have one without the other.

Freedom means the ability to do whatever you want so long as you aren’t hurting anyone else.

Justice is the ability to defend your right to freedom.

Real freedom is not having to defend your rights in the first place.

We haven’t had real freedom – or real justice – in Australia for a very long time.

In 1994 when I started the AVN, attacks against those like us who believe that their freedom begins and ends at their own and their children’s skin was just beginning. Back then, if you told most Australians that there would come a time when the government, the media and a significant portion of society would support silencing those who disagree with them about the benefits of a medical procedure – to the point of criminal charges being laid and possible imprisonment, they would have been incredulous. Remember that many of our parents and grandparents fought and died for these rights.

That they would support not allowing healthy, innocent children into preschool because their parents did not sacrifice them at the altar of vaccination, they would have been horrified. Have we already forgotten the lessons of Eve van Grafhorst who, in 1985 was banned from preschool because she was HIV positive from a blood transfusion and there were fears she could infect her classmates? Australia became a worldwide laughingstock as a result – and today in most states, EVERY unvaccinated child is banned from preschool simply because their parents have not complied with vaccine policies, and our country is applauded on the international stage for encouraging in segregation and bigotry.

Would you ever have considered today’s situation where people are afraid to hug, kiss, shake hands with or even speak to strangers, associates or loved ones for fear of them catching a cold as a result? This morning when I took the lift down from the 31st floor of my hotel, as the doors opened, a young woman was standing at the back facing the corner – not the door. A few floors down, the doors open and a man about my age stepped in, carefully looked the floor to see the X and positioned his feet right over it. Our inability to think for ourselves, the ease with which we have been convinced that everyone around us is a ‘super spreader’ of just one of hundreds of known viruses linked with the common cold, and our fear of having the sniffles today has made me think that perhaps, what is happening is Darwin’s law in action with those weak of mind being culled while the people who are still capable of critical thought will be the ones left standing. Since some of those in the former category are much-loved family members, it gives me no pleasure to say this.

Today, we are joining millions – perhaps tens of millions of people around the world – who are demonstrating in favour of freedom and justice. They are showing by word and by deed that there are some laws they simply will not comply with. Remember, during the Nazi administration of the 1930s and 1940s, shooting and exterminating innocent Jews, Gypsies, Armenians and many other classes of people was perfectly legal and acceptable.

This goes double for the brave members of the Australian police and defence forces. I would bet a lot of money – and have a very good chance of winning it all back and more – if I were to guess that when you joined up, you never once agreed to abuse your fellow Australians, to take away their constitutionally guaranteed rights – even in the face of emergency declarations that have been shown to be both harmful and ineffective, or to drag them off and jail them because they have exercised their right to peaceful protest.

In fact, Cops for COVID Truth was formed because of people in these forces who have had a gut-full of being told to disobey their oath of office and to instead, agree to obey illegal, immoral and unconscionable orders. We are all in this together. We Are all there. If one of us falls, we all do. To show my American roots, I will give you a simple foundational principle of my country of birth – E Pluribus Unum. From many, ONE!

We are strongest when we are united. We are the most likely to succeed when we remember why we’re here and when we are all aiming for a common goal – Freedom and justice. Not just for us, for this one cause. But for all of Australia and all of the world. True justice that recognises that our rights are innate – we are born with them and we have never agreed to have them taken away from us. So long as we hold this to be true and refuse to consent to the drip, drip, drip of tyranny, we will prevail and once again live in a free and just society.

I look forward to sharing that future with all of us here, our families and our society as a whole. Let’s make it happen!

Operation Omicron: The Globalists are Preparing for Mass Murder in the Weeks Ahead

As International Trials Begin Against the Globalists Will a Return to Public Executions be Necessary?