In my previous article entitled “Everything is Looking Up”, I went through the various tools I use in my process and how each of them signaled that the bottom was either already in place or it was close, i.e. we have just one more lower low to go. Nothing has changed in the past week to suggest anything different. If anything, the bullish case for precious metals and miners has strengthened, especially from a fundamental perspective.

Quick on the heels of its $1.9tln stimulus package, the Biden White House is now doubling down on another $3tln infrastructure package. With tax receipts going nowhere, the budget deficit is set to explode to record highs. Much of the debt issued to finance, this additional spending will likely be funded by the Fed. In order to do so, they will be forced to increase QE and that will probably occur at the same time that they announce explicit Yield Curve Control.

As I have said repeatedly, and in my prior article, unless they are willing to allow everything to collapse, the Fed has no choice but to cap yields. Under such a scenario, stocks rise and bond yields stabilize or fall. At the same time, inflation expectations are likely to rise. This means that real yields are set to fall faster than nominal yields. All of which is the perfect scenario for precious metals and miners. But all of this money printing must have consequences and the likely casualty is the dollar. A weaker dollar would also contribute to higher inflation expectations. Again, great for Gold, Silver, and the mining companies. It’s just a question of when.

On the one hand, the Biden administration is clearly eager to get this next bill through Congress as fast as possible. However, Republicans are likely to choke on the amount of pork barrel spending included in the Bill. Hence, expect a little to-and-fro to slow its passage but given the Democrats control of all levels of government, I believe it will ultimately pass in one form or another in April, May at the latest. If so, we can finally look forward to a bottom in precious metals and miners at some point over the next two months, if not already in place.

With respect to the SLR exemption that the Fed decided not to extend, the Fed did say that it would review the SLR requirements. Given the need to fund $3tln of new debt to fund the latest stimulus package, I guesstimate that the Fed is far more likely to loosen the constraints of the SLR in some way to facilitate the banks assistance in financing the biggest supply of new bonds the market has ever seen in such a short period of time. Such news, if it transpires, would also hasten the peak in the dollar and real yields and the bottom in Gold et al.

Like the SLR, the NSFR is another facet of new Basel 3 regulations that are being implemented worldwide in response to the Global Financial Crisis in 2008 to ensure that financial institutions have sufficient high-quality assets to weather a similar crisis in the future without having to resort to bailouts. In essence, these new regulations are designed to mitigate the risk of bankruptcies such as Bear Stearns and Lehman Brothers.

With respect to Gold specifically, the NSFR will significantly penalize Bullion Banks holding Gold in unallocated accounts relative to fully allocated accounts. Unallocated means you have a ‘share’ in a certain amount of Gold whereas allocated means that you own the rights to a specific amount of Gold. Unallocated Gold can be leveraged, loaned out, more than once, creating multiple claims on the same amount of Gold. Allocated cannot. In other words, the Banks will be penalized for unallocated Gold holdings and rewarded for holding the actual physical metal on an unlevered basis. Simply put, it makes it expensive for the Banks to engage in Gold lending or hypothecation. Gold lending is widely considered one of the principal tools used to short Gold. Eliminating or drastically reducing this activity therefore makes it more difficult to short the metal and is therefore bullish.

This is one of many reasons why Gold has been under pressure for 8 months now. In anticipation of this new regulation, Banks would clearly not want to be short the metal. They are motivated to get out of their short positions and even get long. This is what they have been trying to do since the peak in open interest in January 2020: 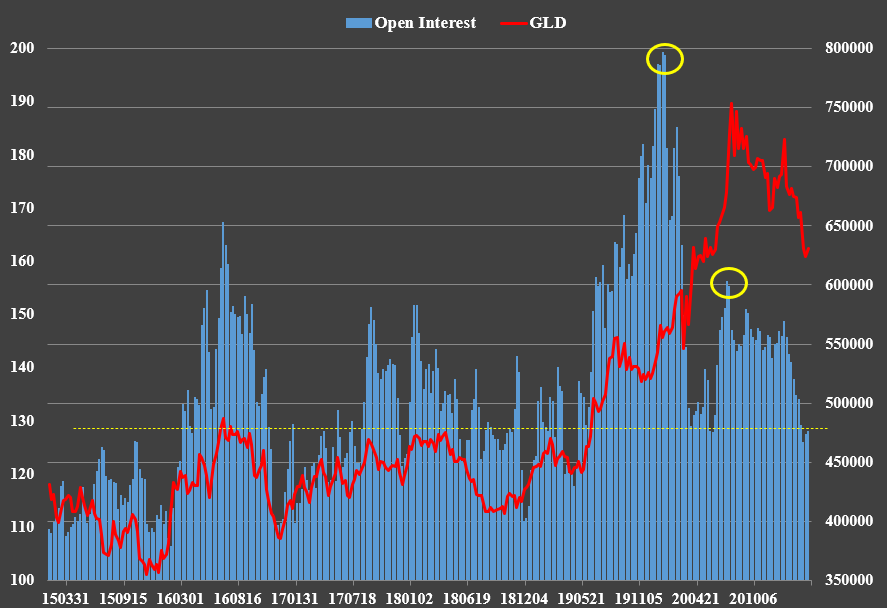 Open interest has now fallen to its lowest level since May 2019, when Gold hit a low of ~1269. Note that the last peak in open interest was in August 2020 and Gold has been going down ever since.

Banks loathe to take a loss on their short positions so they have been waiting for lower prices to cover these positions. They have accelerated this process since January, which is reflected in the drop in open interest since then, and are far closer to at least being neutral. Reportedly, JP Morgan is already net neutral to long. Now it’s just the remaining Bullion Banks trying to get out of their short positions ahead of the new rules to be implemented and the expected rally to begin soon.

This is just further evidence that the bottom is or close.

While we continue to patiently endure weakness in precious metals and miners in the short-term, even as nominal and real yields ease back from their recent peaks, the big picture continues to improve, setting us up for a truly spectacular rally to begin within the next month or two.

Biden Ends US Support for Saudi “Offensive Operations” in Yemen