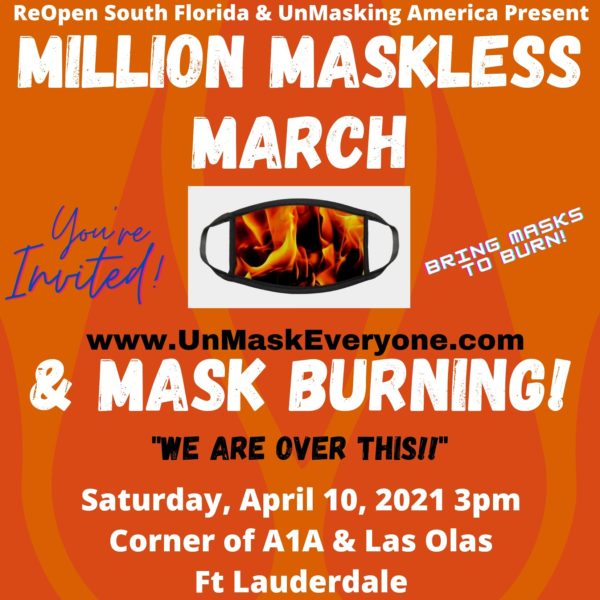 American freedom lovers will gather in Ft. Lauderdale, Florida on Saturday April 10 to protest for Face Freedom. (READ: Numbers In The New CDC Report DESTROY The Case For Mask Mandates).

“You are invited to the Million Maskless March and Mask Burning, Saturday April 10, 2021 at 3pm at the Corner of A1A and Las Olas in Ft Lauderdale!,” writes protest organizer Chris Nelson, who has organized viral flash mobs at chain stores that re-popularized Twisted Sister’s protest anthem “We’re Not Gonna Take It.”

“April 10 marks one year of mask tyranny in Broward County and we will mark that date with a celebration of freedom! It will feature recognition and prizes for those who have faithfully endured this last year, addresses from local leaders and activists and most importantly (and fun) a mask burning! The mask burning is in full cooperation with local law enforcement and will be done in a safe and controlled manner. Following the mask burning we will March north on A1A, make a sharp left at Seabreeze and march back to where we began. The event will be over by 5pm. April is a very busy time for Ft Lauderdale Beach and this is exactly why this location was chosen. Jesus said we should not hide our light, but show it to the whole world. Our goal is for people to see us and be inspired to join in!,” Nelson wrote.

Big money is being made from the sale of fetal body parts.

A chemical that causes penile shrinkage was found in face masks, and Dr. Fauci famously said that Americans do not need to wear masks to guard themselves from Coronavirus before he changed his tune and fought for the extended masking of the human people. Christian actor Kirk Cameron recently defied the globalist establishment by hosting Maskless Christmas Caroling events. Though President Donald Trump is not involved in the anti-mask protest, he released a statement Monday dunking all over Dr. Anthony Fauci. President Trump said, “Dr. Fauci also said we didn’t need to wear masks, then a few months later he said we needed to wear masks, and now, two or three of them. Fauci spent U.S. money on the Wuhan lab in China—and we now know how that worked out.”

Nelson’s recent work includes the viral Anti-Mask Flash Mob at Target, which sparked whiny outrage from Twisted Sister frontman Dee Snider, who has apparently joined the establishment since singing “We’re Not Gonna Take It” in the 1980’s.

The Office of POOFness Weekly Report: Memories of the Ones we Lost