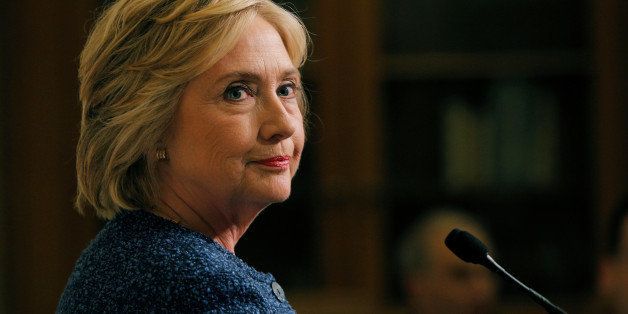 Monday afternoon’s proceedings began with a solemn moment of silence to honor the four valiant Americans who tragically lost their lives in Benghazi.

Their deaths, Vice Adm. Hannink told the three-officer tribunal, were preventable, but Clinton wanted to nurture amenable relations with Libya’s provisional government and the anti-American Islamic militant groups that rose to prominence after the killing of Muammar Gaddafi.

“Detainee Clinton was more interested in making friends with terrorists than she was protecting American lives. For many people it’s easy to forget what happened 7 years ago, but we cannot forget. We cannot forget that thanks to the detainee’s callous disregard for American lives, four Americans went home to their families in a wooden box draped with an American flag,” Vice Adm. Hannink told the tribunal.

He asked the two men and one woman on the tribunal to imagine, vicariously if they could, the terror Ambassador Stephens must have felt as he choked on black smoke and burned alive after Jihadists set fire to the American diplomatic compound. Or the exhaustion Woods and Doherty endured as they, propelled by sheer adrenaline, defended the CIA annex for 13 hours against swarms of encroaching members of Ansar al-Sharia.

“Clinton’s role no longer needs to be ascertained; it’s well-known. Yes, she has said she had no knowledge of the incursion until it was over, but that’s a provable lie. When personnel at the CIA annex saw the diplomatic compound, less than a mile away, ablaze, they immediately notified Deputy Secretary of State William Burns, Clinton’s #2 man, and he telephoned Clinton, asleep in her bed at 3:00 a.m., we can’t begrudge her that, and told her the CIA contractors, knowing the annex would be next to fall, wanted to defend. But Clinton refused, and here’s how we know this,” Vice Adm. Hannink said.

He played an audio recording of a telephone call that transpired that night. It was clearly Clinton’s witch’s cackle talking to Burns.

“State is under a massive attack. Arrow (the State Dept’s codeword for the CIA annex) wants to defend. They think they’ll be next,” Burns said.

“Can we give Arrow the greenlight?”

After a long pause, Clinton said, “Absolutely not. The last fucking thing we need is to antagonize al-Sharia. If this explodes, it could fuck everything.”

At that point Vice Adm. Hannink paused the tape and dropped a bombshell. He asserted Clinton’s primary concern was protecting a clandestine government operation, that the diplomatic mission in Benghazi was used by the CIA as a cover to smuggle weapons to anti-Assad rebels in Syria. If the CIA’s presence in Benghazi became a matter of public record, the arms-smuggling operation would collapse and Libya’s provisional government would view unfavorably any American feet on Libyan soil.

“Arrow is to stand down, do you hear me? I don’t care what happens next. They are not to move, at all,” Clinton could be heard saying.

“What if Americans die,” Woods asked.

“What happens, happens. Brief me in the morning. I’m going back to bed,” Clinton said.

Vice Adm. Hannink killed the tape. “Do we need to hear more to determine her guilt in this matter? I don’t think so. The tape speaks for itself. The detainee sitting before you is directly responsible for the deaths of those four men, and must be held to account. She is complicit in their deaths and guilty of treason,” he said.

He asked the tribunal to digest what they had heard, and said proceedings would resume Tuesday afternoon.