JERUSALEM — As the holy month of Ramadan comes to a close, it is becoming clear that the violence against Palestinians in Jerusalem has been ramped up in a coordinated effort by the Israeli government, the Jerusalem municipality, the Israeli police, and violent Zionist gangs.

These latest events must be seen in the larger context of the ethnic cleansing of Palestine in general, and of Jerusalem in particular. They should also be seen in the context of internal Israeli politics. Jerusalem is burning and Israeli politicians go on about their business of mud-slinging as if this was not their problem and not a single one thinks anything is wrong with the way the Israeli authorities are handling the situation.

That the assault on the residents of the Jerusalem neighborhood of Sheikh Jerrah — which holds a particularly important historic, cultural and political significance to the city — is happening at this particular time is not a coincidence.

The neighborhood is home to the Orient House, which, aside from being a symbol of Palestinian independence in the city, is perhaps the most impressive home built in the neighborhood and one of the finest in Jerusalem.

Sheikh Jerrah is also home to Dar Al-Tifl Al-Arabi — established by the remarkable Hind Al-Husseini, originally as a school and boarding house for orphans who survived the Zionist massacre in the village of Deir Yassin. Today it still functions as a school and it stands as a constant reminder of the Zionist atrocities and Palestinian resilience.

Pushing out Palestinians and allowing settlers to take their homes is always good for politics, particularly if it sparks “violence.” Now the authorities can show the Israeli people that they know how to deal with the “Arabs.”

Palestinians help a woman injured by Israeli police during the evictions of Palestinian families in the Sheikh Jarrah, May 8, 2021. Oded Balilty | AP The town of Silwan, also known as Wadi Hilweh, sits right outside the Old City. It has been a victim to a violent and particularly brutal campaign of ethnic cleansing, violence, and destruction. For years the residents of Silwan have been subjected to destruction of their homes and evictions so that Settlers may take over and excavations may take place. Needless to say, the people who had been evicted and whose homes were destroyed or taken received no compensation.

All this is being done supposedly for “scientific reasons,” so that “archeological” findings could be uncovered. So far not a shred of evidence has been found that King David ever existed, yet an archeological park called The City of David has already been built. This has created a great deal of tension in Silwan, with settlers moving into Palestinian homes and Israeli security forces and a private militia that works for the settlers constantly terrorizing the town’s Palestinian residents.

The Old City of Jerusalem

Zionists do not recognize the fact that the city of Jerusalem, and particularly the Old City, has for the better part of 2,000 years been a majority Muslim and an Arab city. The culture, architecture, monuments, and the residents of the city are mostly Muslim and Arab as well, with several minority communities coexisting alongside them, including a small and impoverished Jewish community that lived within the Jewish Quarter.

In the aftermath of the Israeli assault of 1967, East Jerusalem along with the Old City fell into Zionist hands. Since then, the State of Israel has been engaged in a massive campaign to boost the Zionist mythology, which claims a connection between Zionists and the biblical King David.

The city’s Jewish Quarter has been expanded and built to a point where it is an eyesore in what is otherwise a uniquely beautiful ancient city. As Zionists have done throughout Palestine, in Jerusalem, too, they have evicted Palestinians from their homes so that Jewish settlers can take their place.

To make things worse, there is a massive Israeli military and police presence in the city. Their role is to intimidate Palestinians and embolden settlers, creating a tense environment where it is dangerous to be a Palestinian. On top of this, in an effort to drive out Palestinian merchants who have had stores in the Old City for generations, international and Israeli tour guides who have Israeli licenses to conduct tours in the city, instruct tourists not to shop in Palestinian-owned stores, only in stores that are Jewish-owned.

Laylat-al-Qadr is considered to be among the holiest nights in the Islamic calendar. It falls within the last ten days of Ramadan. It is believed that it was the night when the first verses of the Holy Qur’an were revealed to the Prophet Muhammad. As these words are being written, this night is being observed throughout the Muslim world, with worshippers filling local mosques for long sessions of worship and reflection that often run well into the night.

Israeli forces clashing with worshipers in Jerusalem inevitably leads to Palestinian resistance and, more often than not, to Palestinian casualties. During the Holy Month of Ramadan, and particularly on this night, it can lead to disaster. 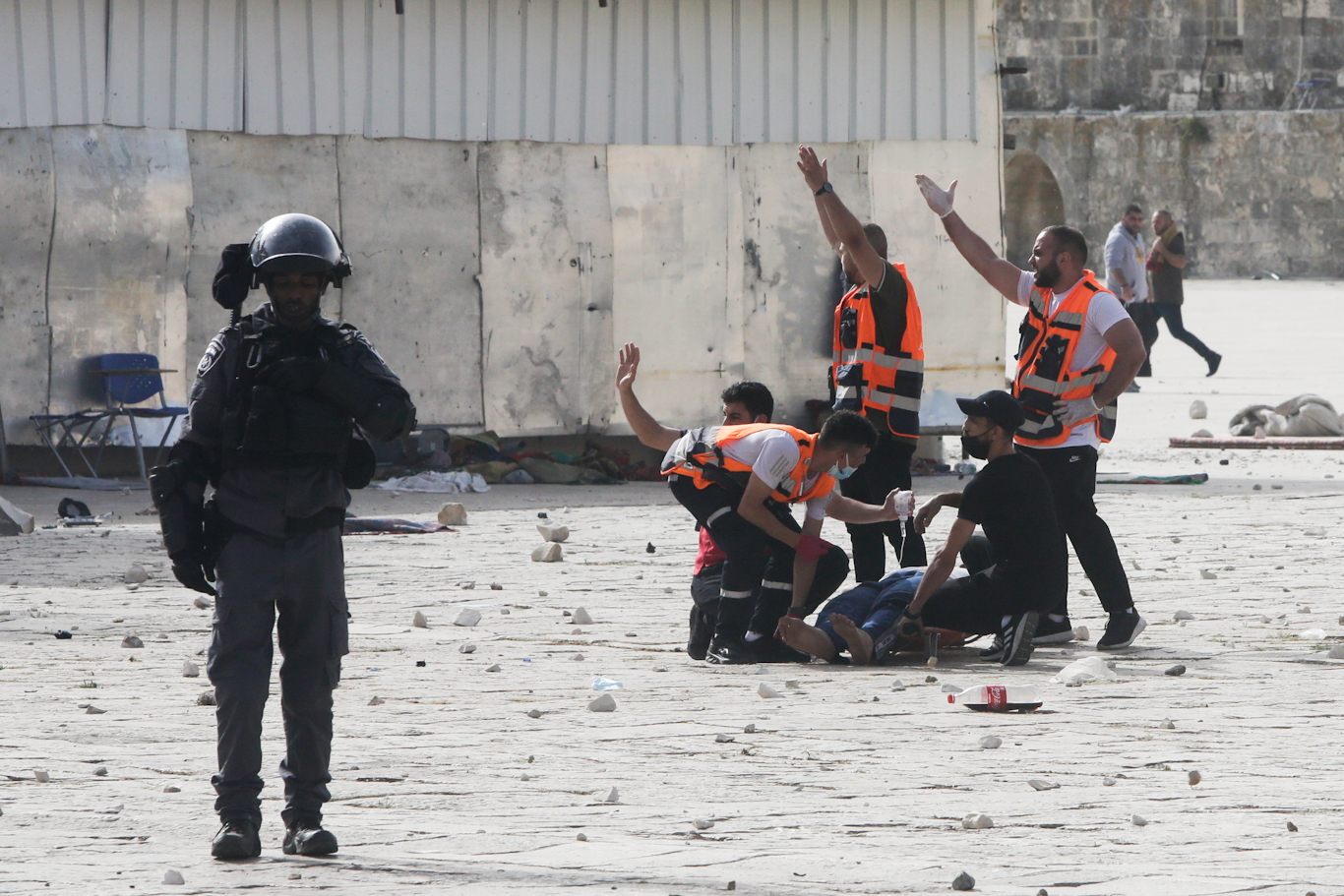 Medics treat a wounded by Israeli police at the Al Aqsa Mosque compound in Jerusalem, May 10, 2021. Mahmoud Illean | AP Palestinians evacuate a man wounded by Israeli police at the Al Aqsa Mosque compound in Jerusalem, May 10, 2021. Mahmoud Illean | AP

Jerusalem Day, the day when Zionists celebrate the 1967 conquest of the city, is upon us. This year it follows (or rather is a continuation of) the terrorizing of Palestinians by Israeli authorities and armed Zionist gangs.

Rafi Perets — Israel’s minister for Jerusalem affairs, a neo-fascist, and member of the Religious-Zionist movement — made no comment at all about the violent events happening in the city. He says that he is excited to prepare for the “celebrations” of Jerusalem Day. This is a day where Zionist gangs raid the Old City and terrorize Palestinian residents and merchants in what can only be described as a psychotic celebration of conquest and destruction.

Having experienced the so-called “celebrations” within the Old City of Jerusalem, I am horrified to think what they could bring in 2021, as Israeli youth march through the city’s narrow alleyways chanting “death to Arabs” and “expel the Arabs.”

All it takes is a spark

For close to one hundred years, Zionists have been stealing Palestinian land, claiming that Jews had once lived where the Palestinians now reside and it is, therefore, permissible to evict them and take their homes and land. This is the case in Sheikh Jerrah, in Silwan, and it is the case in all of Jerusalem, and indeed all of Palestine.

The State of Israel, with its politicians vying for popularity and its armed Zionist gangs, will not rest until every Palestinian leaves Jerusalem and the Al-Aqsa compound is in ruins. This will be their “mission accomplished” moment.

Images of Israeli forces shooting gas grenades and rubber-coated bullets within the Al-Aqsa compound and inside the walls of the mosque itself leave no doubt that an “accidental” fire could bring down the ancient Mosque, and it would no accident. As these words are being written, there is every reason to believe the tragic (and seemingly unbelievable) scenario that one of Jerusalem’s holiest sites, and one of the world’s most revered monuments, could soon lay ruined in ashes as Zionist forces smile in satisfaction.

Printing meat from stem cells could be the future of food