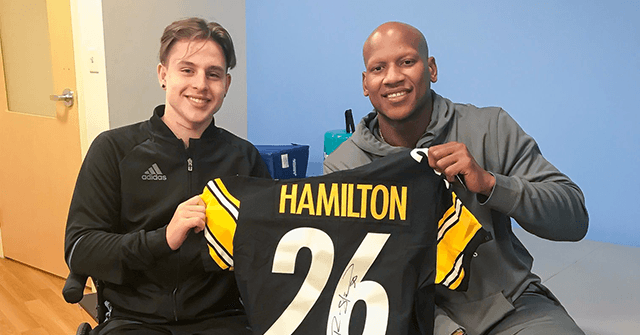 Video of a high school graduate in Pennsylvania walking at his recent graduation ceremony a few years after he was paralyzed is getting a lot of attention online.

In 2018, Hayden Hamilton was paralyzed from his neck down due to a spinal injury caused when he tried to make a tackle playing football with the Laurel Spartans, according to CBS Pittsburgh.

Hayden Hamilton, a Laurel High School teen, who suffered a spine injury during a football game at the end of August, is…

Posted by UPMC Children’s Hospital of Pittsburgh on Friday, October 26, 2018

However, this week, with the assistance of leg braces, a walker, and his therapist, he walked across the football field to receive his diploma.

Go ahead and try to keep a dry eye through this. In 2018, Laurel High School’s Hayden Hamilton was paralyzed from the neck down after a hit in a high school football game. Tonight HE WALKED!!!! To get his diploma at graduation – and then got a standing ovation. pic.twitter.com/pRczqXJUbK

Moments later, the crowd erupted into applause and cheers as each of the young man’s strides became longer. The large crowd then gave him a standing ovation.

He shook hands with the man who gave him his diploma, then smiled for a picture.

Talk about a comeback story. Inside this same Laurel High stadium three years earlier, Hayden was carted off the field on a stretcher, with no feeling from his mouth down after trying to make a tackle in the first home game of his sophomore season. He was a starting linebacker/defensive end, but suffered a serious spinal injury and was paralyzed from the neck down. He was the first football player in the WPIAL to paralyzed since the 1970s.

Following the standing ovation, Hayden said, “That felt better than any touchdown I ever scored.”

According to the newspaper, his parents, Chad and Melissa, were two of only people who had ever seen him walking. However, at therapy, there are days when he walks 300 feet.

“We had no idea. I was shocked,” Kobe DeRosa, one of Hayden’s friends, commented. “He deserved that standing ovation 100 percent.”

Hayden said he thought it was cool he got to walk in the place where his injury happened.

Twitter users congratulated Hayden and one person called him “A true champion!!!!”

“Hayden, congratulations! You’re incredible, and we are all cheering for you!” another user commented.