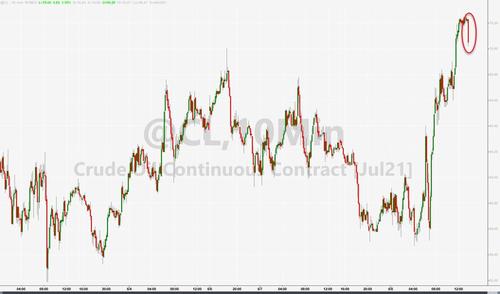 Oil prices spiked today with WTI back above $70 for the first time since Oct 2018 as traders edged down their odds of a completed Iran nuclear deal (which would likely bring new supply). US told Iran on Tuesday that it must let the UN atomic agency continue to monitor its activities, as laid out in an agreement that has been extended until June 24, or put wider talks on reviving the Iran nuclear deal at risk…

“I would anticipate that even in the event of a return to compliance with the JCPOA (2015 Joint Comprehensive Plan of Action), hundreds of sanctions will remain in place, including sanctions imposed by the Trump administration,” U.S. Secretary of State Antony Blinken said.

“Blinken is looking at the reality of the situation and saying even if we do get a deal, there’s a long way to go,” said Phil Flynn, senior analyst at Price Futures Group in Chicago.

“All those people expecting a flood of oil are going to be disappointed.”

On the more bearish side overnight, data showing China’s crude imports were down 14.6% in May on a yearly basis weighed on futures (before the buying panic arrived).

“We’re looking for a pretty sizable drawdown in U.S. crude oil inventories, while the demand thesis keeps improving,” said John Kilduff, a partner at Again Capital LLC. “This atmosphere remains bullish, as we’re heading into a structural deficit in terms of supply versus demand.”

“The fundamental environment on the oil market remains favorable: fuel demand is recovering strongly not only in the United States, but also in Europe following the (partial) lifting of restrictions,” Commerzbank said. 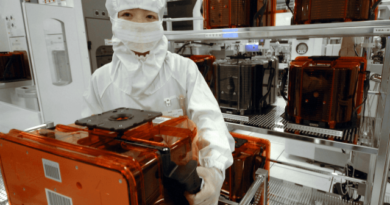