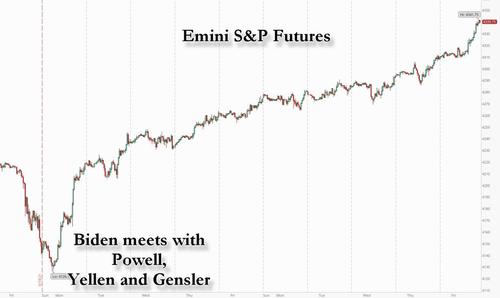 Earlier today we made the observation that after the brief post-FOMC freakout, stocks have risen for two weeks straight, making new all time highs virtually every day, and all that was necessary for this ramp higher was for Joe Biden to meet with Powell, Yellen and Gensler the morning of Monday, June 26. What happened next is familiar to all.

But it’s not just stocks where one can find the impact of Powell’s not so invisible finger. According to the just released May calendar notes for the Fed chair, on Tuesday, May 11 at 11:15am, Powell met – in person and not by zoom as most of Powell’s other meetings – with Coinbase CEO Brian Armstrong (less than a month after the company went public on April 12, along with Republican Paul Ryan.

This meeting was followed the very next day with former CFTC commissioner and current head of the Digital Dollar project, Chris Giancarlo.

What we find remarkable is that May 11 is the day when bitcoin began its plunge, tumbling from $57K to just $33K less than a week later.

And while the drop has been largely attributed to Musk’s tweet just a few hours later, on May 12, that Tesla would no longer accept bitcoin for car purchases, citing environmental concerns, one wonder just what Powell told the Coinbase CEO one day before the biggest drop in bitcoin since the onset of the “great winter” in December 2017.

Monkeypox is clearly a “gay” disease, but the CDC is doing everything possible to avoid offending LGBTs 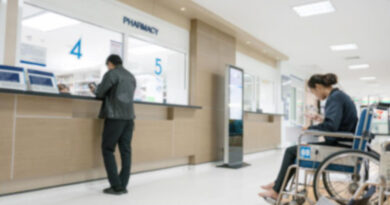 Money grabbers: US hospitals are not complying with cost transparency rules; patients getting ripped off