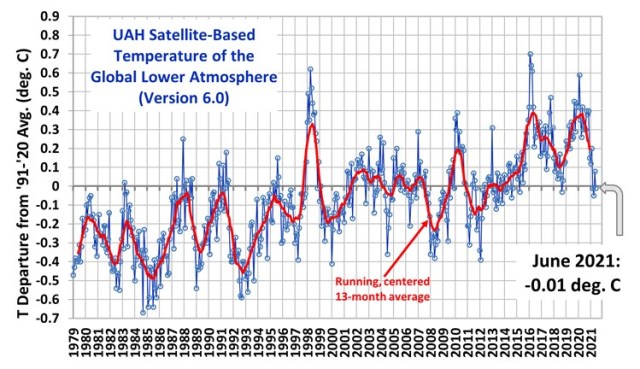 That’s right, despite the mainstream media’s incessant EOTW ramblings re the Pacific Northwest’s heat, Earth’s average temperature actually dropped below the 30-year baseline in the month of June.

A continuation of this downward trend is probable over the coming months (with the odd bump along the way–climate is cyclic, after all) as low solar activity, and all the complex, poorly-understood mechanisms attached, continue to cool our planet’s atmospheric layers: from the mesosphere down.

According to the 15x NASA/NOAA AMSU satellites that measure every square inch of the lower troposphere (where us humans reside), planet Earth was actually warmer back in 1983:

This is a sizable shift in the climate.

The drop doesn’t appear to be a temporary dip below baseline –as we’ve seen in the past (most recently in 2018)– no, this time we are holding here, and the signs of cooling are all around us:

The Antarctic region (poleward of 60 S latitude) logged -1.25C below the 30-year baseline in June — this made it the icy continents second coldest June in the 43-year satellite record (behind the -1.34C logged in 2017).

In contrast, the USA Lower 48 saw an anomaly of +1.44C — its warmest June reading in the 43 year satellite record (ahead of +1.15 deg. C in 1988), and up from the -0.41C registered in the previous month, May–but this dramatic “flip” (seen from May to June) serves as evidence of a low solar activity induced meridional jet stream flow and the swings between extremes, and not the failed anthropogenic global warming hypothesis (see link below).

The cooling trend observed by NASA in the upper atmosphere over the past few years has now begun to permeate down the atmospheric layers to the global lower atmosphere:

And with the impacts of 2016-17’s record-strong El Nino now fully faded, and effects of the moderate 2019-20 event also having dissipated (both clearly noticeable in the below chart), the cumulative reduction in activity through solar cycles 23 and 24 is now finally impacting our global temperature datasets — and not just regional ones; no, I’ll say it again: the record cooling of the thermosphere and mesosphere has now worked its way down to the troposphere (aka the global lower atmosphere):

The “bigger picture” is what the climate alarmists tell us to look at, and the bigger picture reveals GLOBAL COOLING.

Prepare for the cold — Grow Your Own — I’m off out to seed save from my Chantenay carrots:

The post Despite MSM lies and exaggerations, Earth’s Average Temperature Fell BELOW the 30-Year Baseline in June appeared first on Electroverse. 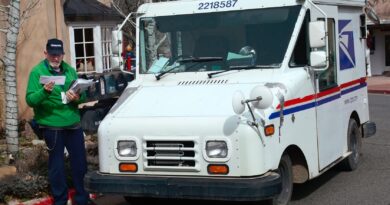 The Last Thing The USPS Needs Is A ‘Green’ Fleet