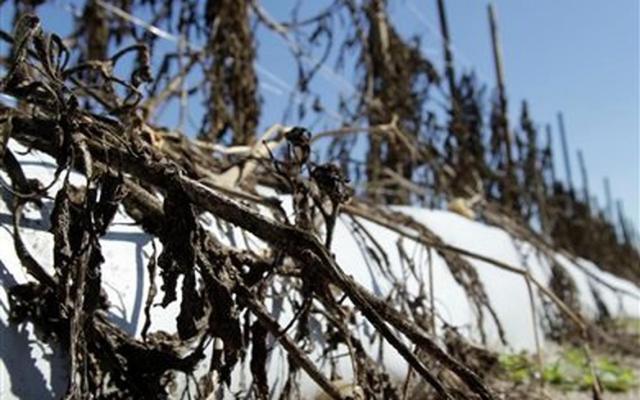 Farmers across east Africa are counting their losses as an unusual chill continues to blast the region.

According to the Kenya Meteorological Department, the cold of winter started earlier than usual this year, in May, rather than during the expected month of July.

The chill has been ravaging growing regions across east Africa, reports xinhuanet.com, with the mercury in some regions plummeting close to freezing, which is astonishing.

In Nairobi, the capital city of Kenya, the average overnight low has been 10C (50F), with the daytime highs averaging at 18C (64F) — these readings are some 8C (14F) and 6C (11F) below the seasonal averages, respectively, according to the Department data.

“The cold weather provides a perfect environment for diseases, in particular blight, to thrive,” says Beatrice Macharia, an agronomist with Growth Point.

Macharia notes that farmers growing crops in the field, in particular tomatoes; capsicums (peppers); cucumbers; potatoes; and onions, are having it rough due to the unusually fierce (and persistent) cold.

“They have to spend more, and fight the disease through the use of chemicals that protect the crops but still this is not working for some,” laments Macharia, who is deeply concerned by “the lengthy cold season this year, with temperatures falling to the lowest levels.”

She continues: “In areas in the Rift Valley, like Nyandarua –where temperatures are regularly falling to 3C (37F)– even with the application of chemicals the chances of survival for field horticultural crops are too low.”

Macharia suggests that growing crops in greenhouses may be the way forward, as such structures protect crops from blight by holding the mercury some 5C above the outside temperature, she says.

Bernard Njuguna, a farmer in the Rift Valley, is among those counting his losses due to the cold weather.

Unfortunately though, the historic chill that hit Nyandarua wiped-out his crop just as it was at the key flowering stage. Njuguna lost his entire harvest, even after using various chemicals in an attempt to save it.

“The crop on the entire half-acre withered; the leaves and the stems dried leaving me with losses,” he said.

He has since erected a greenhouse on his farm following advice from agricultural officers.

But with few farmers growing crops in greenhouses as compared to open fields, the supply of fresh produce in east Africa has declined dramatically in recent months, and has resulted in prices soaring.

A kilo of tomatoes, for example, is currently being sold at 0.74 dollars, up from 0.46 dollars in April.

The cost of other horticultural produce has also skyrocketed, pushing up food inflation in east Africa.

Laughably, Macharia attributes this historic and early-season cold to the mythical beast that is “climate change”.

The world’s so-called academics are blindly trusting a theory built upon the work of just a few climate modelers.

You can picture today’s ‘global warming science’ as an upside down pyramid, says Dr. Mototaka Nakamura.

These AGW pioneers claim to have demonstrated human-derived CO2 emissions as the cause of recently rising temperatures and have then simply projected that warming forward.

Every climate researcher thereafter has taken the results of these original models as a given, and we’re even at the stage now where merely testing their validity is regarded as heresy.

No, global warming does not mean crop-destroying cold in eastern Africa.

Nor does it explain the heavy frosts ravaging the sugarcane, coffee and corn crops in South America:

It doesn’t account for Greenland gaining record amounts of snow and ice this year:

And neither does it explain Earth’s average temperature dropping below the 30-year average in June:

These are the facts.

I don’t know why me mentioning them gets so many people up in arms.

Dogma is a powerful weapon, I guess.

The post An intense, early-season chill has been “Ravaging” East Africa’s Crops appeared first on Electroverse.