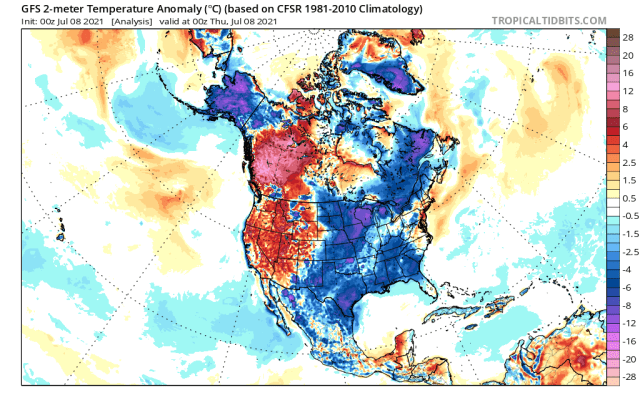 A severe summer chill has invaded large pockets of Canada.

The Arctic invasion has brought temperatures plummeting below zero (C) in northern parts — the mercury in Cape Dyer, Naunavut, for example, has tumbled to -5.4C (22F).

Summer snow is also settling, predominantly on the north coast of Labrador.

Below is a shot of the rare accumulating flakes at Voisey’s Bay from July 7, courtesy of @SeanLyall on Twitter:

Worth also noting is how Armstrong, Ontario and Gillam, Manitoba went from 35C+ to a summer freeze in barely 3 days — yet another example of the Grand Solar Minimum and the swing between extremes.

Looking ahead, two-thirds of the North American continent will suffer further anomalous chills this week:

While Canada’s exceptional summer snowfall is forecast to intensify and spread westwards to British Columbia, the Yukon and the Northwest Territories:

Note the incredible totals forecast for Greenland, too.

These will only add to the exceptional SMB growth witnessed this season:

Never before at this time of year (aka summer) has the Greenland ice sheet actually GAINED mass.

But nobody’s talking about Greenland — and as with Canada’s summer snow, and North America’s anomalous chill, we can add the icy island’s real-world observations to the ever-growing list of ‘unreported weather phenomena’, as the obfuscating MSM focuses ALL its attention on the West’s heat; that is, despite Earth’s average temperature falling below the 30-year baseline in June:

June, 2021 in Bolivia came out colder than average, according to the country’s meteorological agency.

A few positive anomalies prevailed in the Andina regions, but the majority of locales, particularly those at low elevations, were routinely bombarded by polar blasts.

June, 2021 in Argentina also finished-up colder than average, most notably across the north of the country.

It was also drier than normal for most, except for few areas in the NW where positive precipitation anomalies were logged.

Record lows and snows have swept Argentina in recent weeks:

In fact, the majority of the South America continent has been dealing with record-breaking chills:

The continent’s’s early-season cold snap is persisting into July, too, as a colder-than-average Antarctica continues to ‘fling’ frigid polar air masses to the lower latitudes.

Looking at the latest GFS run (shown below), much of the same is on the cards for the remainder of the month.

After a brief warm-up this week, temperature anomalies are set to nosedive again beginning July 16.

And by Saturday, July 17, a monster mass of polar cold is expected to have engulfed northern Argentina, Uruguay, Paraguay, Bolivia, and southern Brazil:

These cold anomalies are forecast to intensify by July 22, to levels some 22C below the seasonal norm:

“Non-optimal” temperatures kill more than 5 million people globally, according to a new study.

But note the phrasing: “non-optimal”.

Knowing the scientific establishment and their MSM lapdogs as we do –as filthy warm-mongers– this wording should immediately lead you to assume that COLD is to blame for the majority of deaths, otherwise the title would have specifically stated “heat” — and after delving down into the detail, you would be right…

To better understand how weather affects a person’s health, scientists from Monash University in Melbourne compared death and temperature data across the world from 2000 to 2019 — during the final throws of solar-induced global warming (which ended ≈2016).

Results, published in The Lancet Planetary Health, suggest that 9.43 percent deaths could be attributed to those “non-optimal” temperatures, equivalent to 74 extra deaths per 100,000 people; which, in English, breaks down to just 0.91 percent from heat, and 8.52 percent from the cold.

The heat, not so much.

This should be the takeaway from the study; however, Prof Yuming Guo’s take, who is one of the paper’s lead researchers, is somewhat different: “If we don’t take any action to mitigate climate change … more deaths will be caused,” he told The Guardian (well, how else would his study have obtained funding?).

The Guardian, along with their climateering cronies, will have their day of reckoning.

The Sun will see to that. 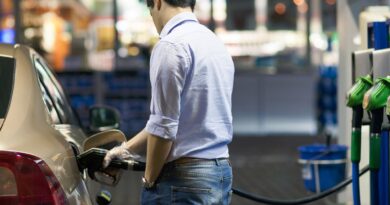 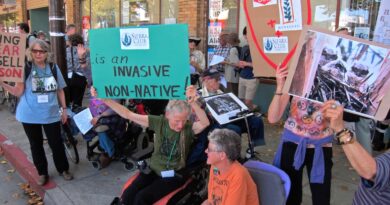