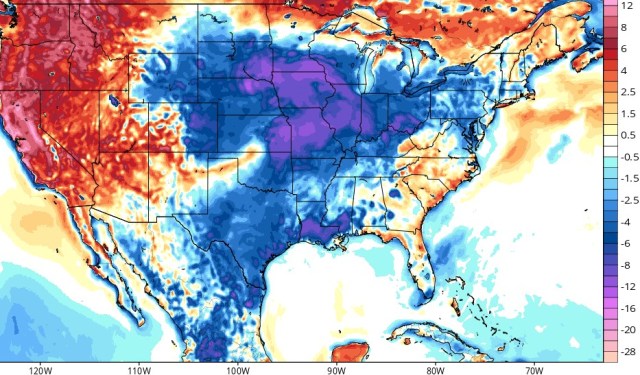 The global average temperature has dropped some 0.7C since the start of 2016. And looking ahead, climatic patterns look set to accelerate this cooling into 2022 — click below for more on that:

While chilly summer lows up north aren’t particularly unusual, frost in July is a rare phenomenon, even across the northern stretches of Minnesota.

An Arctic air mass produced low temperatures in the 30s across much of northeast Minnesota on Thursday, reports mprnews.org.

Below are a few other locales in and around NE Minnesota and NW Wisconsin that logged exceptional July lows on Thursday, data courtesy of National Weather Service Duluth:

These exceptional summer chills are due to an Arctic front which rode unusually-far south on the back of a weak and wavy meridional jet stream flow (a phenomenon that is expected to intensify during times of low solar activity–such as the historically low output the sun has been seeing for the past decade-or-so).

Looking at the GFS 2m Temperature Anomaly run (shown below), these chills are forecast to persist through the weekend and into early next week:

The MSM is throwing a heat-induced tizzy over the West’s heat while at the same time are completely ignoring the equally-anomalous cold currently infecting an equally-large (or larger) area of the CONUS.

According to the consensus, those “oranges” and “reds” in the NW are due to anthropogenic global warming, while all those record-breaking “blues” and “purples” across central regions are merely weather.

This logic obviously doesn’t play, and the actual science behind this current setup, as hinted at above, involves low solar activity and a meridional jet stream flow, not cow farts (click below for a more in-depth explanation).

Brazil produces three corn crops per year, according to Conab, a summer crop, a winter crop, and a crop produced at about the same time as the winter crop, but in Brazil’s warm northeast.

The 2021 winter crop has been severely impacted by the recent cold and dry spell, but it also lost serious ground when farmers were forced to plant late due to multiple rounds of Antarctic air earlier in the year, Conab said.

The cold was widespread and affected crops across South America, including the nations of Argentina, Uruguay, Paraguay, and Bolivia, as well as Brazil.

As reported by marketscreener.com, analysts fear corn production will drop even further because of “unusually low temperatures” across the South American continent.

Surges of polar air are once again engulfing swathes of Australia and New Zealand.

Starting with Australia, residents in Perth and Western Australia’s South West are being told to brace as the current cold front threatens to turn even stronger after the weekend.

A severe weather warning is already in place for the system, which encompasses areas on the west coast from Yanchep to Bunbury, including Perth, Mandurah, Collie and Harvey; but looking further ahead, and to Monday, July 12, an even worse cold front –expected to be the strongest of the season so far– is due to hit.

Monday’s cold front will be the fourth to cross the south west corner of the state since Sunday, reports abc.net.au, and the third to prompt a severe weather warning: “Typically, cold fronts of this magnitude are seen twice a year,” said Bureau of Meteorology forecaster Gianni Colangelo, but Australia’s SW is already on its third.

Colangelo added that the coming cold front was expected to bring wind gusts of up to 100km/h, heavy rainfall and flash flooding, particularly in the south west of WA.

“The size of the weather system means even areas to the north will be experiencing conditions that are unusual,” he added, while between 20-40mm (0.8 inches to 1.6 inches) of rain in the Perth metropolitan area and up to 70mm (2.8 inches) in the south west is forecast by next Thursday.

Department of Fire and Emergency Services (DFES) Chief Superintendent Danny Mosconi said the easing conditions between the two cold fronts would provide a window of opportunity for people to prepare for the more severe weather expected next week.

“The key message is to use the weekend to prepare your property,” he said.

Eastern Australian’s can expect similar conditions, as a polar blast that saw temperatures drop to -4C (24.8F) in Melbourne on Friday is set to last over the weekend; in fact, Bureau of Meteorology duty forecaster Hannah Marsh said the cold front is expected to linger across the entire state of Victoria for at least the next few days.

A similar setup is building to the one that brought record-low readings earlier in the year, said Marsh.

A high pressure ridge travelling from South Australia to Tasmania will cause a similar sharp temperature drop to the record-breaking one suffered in May, during which Sydney marked five-straight days below 9C (48.2F) — not since 1967 had Sydney experienced a colder streak in the month of May.

In addition, not only was this the city’s coldest run of May nights in 54 years, it was “the coldest run of nights this early in the year in 66 years,” a Bureau of Meteorology spokesperson said at the time.

Switching attention to New Zealand, the next 7-or so days will also lock in an anomalous bout of Antarctic cold.

The polar front is forecast to bring severe frosts to both the South Island AND the interior of the North Island.

RuralWeather.co.nz sees overnight lows “dropping dramatically” in the South Island from Sunday night, with bone-chilling readings of –12C (10.4F), and beyond, predicted for the high country.

Regions such as Tekapo and Twizel, and surrounding areas, are most likely to suffer extreme cold.

A severe chill has already set in across many regions, such a in Timaru, a port city located in the southern Canterbury area:

Forecasts see the windchill plunging below freezing for most, and heavy snow falling across the hills next week.

“While the snow level is generally about 300m (980ft), it may go lower,” said head WeatherWatch forecaster Philip Duncan, who added that feels-like lows even at sea-level will plunge well below zero (C) — to -3C (26.6F) in Dunedin, for example.

Kenya’s Department of Meteorology has cautioned its citizens to brace themselves for “chilly weather” throughout the month of July.

The Murang’a County Director of Meteorology, Paul Murage, said the temperatures are expected to plummet to 7C in some parts of the county, which are “extremely low” for the region, added Murage.

He advised local residents to wear warm clothes and to exercise frequently so as to withstand the cold temperatures: “Eating of indigenous foods should be part of every diet as they are inexpensive and are known to protect the body against illnesses,” continued Murage.

As reported by kenyanews.go.ke, the majority of the has experienced very low temperatures this season, which may bring an upsurge of respiratory conditions.

The meteorological department also warned people with underlying health conditions to take extra precautions during this time of cold weather.

“The cold should be a concern to people with health conditions like asthma, pneumonia, common cold and other respiratory diseases as cold … tends to exaggerate the severity of such conditions,” noted Murage.

And finally, while increase precipitation should aid the nations crop producted, Murage has advised farmers to to brace for post-harvest challenges as a result of the continued low temperatures. 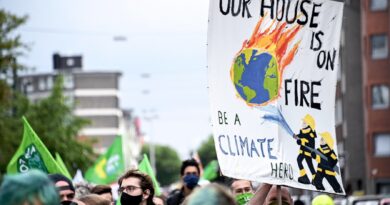 The Climate Scaremongers: It’s Worse Than We Thought! 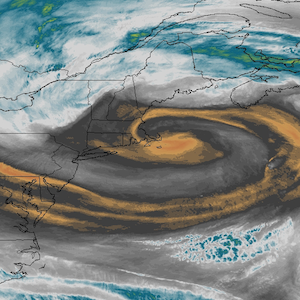