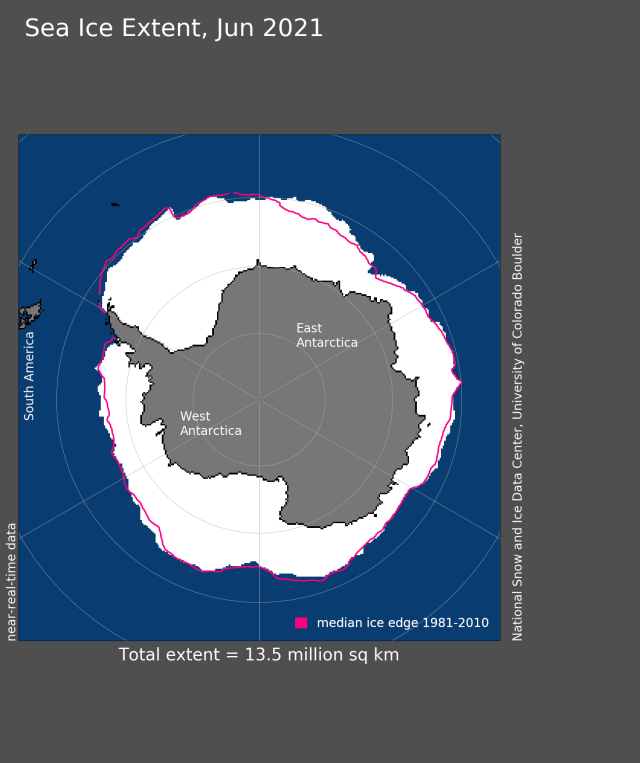 According to the June, 2021 report recently released by the National Snow and Ice Data Center (NSIDC), it is revealed that the ice locked at Earth’s poles is actually GROWING.

The opening lines of the report reads: “Sea ice in the Southern Ocean surrounding Antarctica was well above the 1981 to 2010 average extent in June, rising above the ninetieth percentile near the end of the month”.

But that’s as far as the NSIDC go…

They have plenty to say on the Arctic –which is experiencing its sixth lowest extent on record (big whoop)– but when it comes to Antarctica, I hear nothing but “crickets” — clearly, the icy continent GROWING in mass, and so offsetting the comparatively small losses registered by its northern cousin, is seen as a dampener to the AGW party.

Or perhaps the NSIDC are just letting the data speak for itself:

That magenta line running around edges of the Antarctic ice sheet is the 1981-2010 median ice edge.

As you can see, this year’s extent is riding comfortably above this benchmark.

Looking at the data another way…

This news, if you’re an alarmist, is surely something to be celebrated.

The icy continent holds 90% of Earth’s freshwater — so, if you’re one of the gullible that have been conditioned to lose sleep over ‘sea level rise’ then this latest datapoint should quell those fears.

Unfortunately though, alarmists selectively ignore ‘good news’ and instead accumulate only bad news–the news that supports their fears, which, thanks to the likes of the IPCC and their MSM lapdogs, is rammed down our collective throats on a daily basis — it is impossible to ignore.

It’s a type of cognitive dissonance, I guess — people are rejecting new information that conflicts with their existing beliefs, even when the new information is positive: this isn’t how science is supposed to work.

Oh, and the NSIDC has more.

Looking at their historical chart which runs back to 1979, an overall trend of growth is shown here, too.

According to the data, ice around the southern pole has been increasing at ≈1 percent per decade:

I can’t put this any clearer.

“Global Warming”, or “Climate Change”, or “Catastrophic Terra Firma Broiling” –or whatever you want to call it– is a failed theory, and one no longer grounded in science. It is instead an authoritative thumb looming over the masses, casting a doom-laden shadow upon every thought and dream for the future. It is a politicized weapon cynically wielded by our faceless elites in an attempt to reshape society in whichever way they see fit.

The media’s latest heat-induced tizzy is regarding the Pacific Northwest.

The MSM’s claim is that this heatwave is indicative of the rest of the planet, and is a sign of our ever-warming climate — a statement patently untrue.

According to the 15x NASA/NOAA AMSU satellites that measure every square inch of the lower troposphere (where us humans reside), while the west coast was “burning-up” Earth’s average temperature dropped below the 30-year baseline — our planet was actually warmer back in 1983:

As is the story with polar sea ice extent, the ‘bigger picture’ is often an unalarming one.

Reject the politicized dogma of the day.

Instead follow the science, which suggest the coming epoch will one of global cooling, not warming.

Should I Stay or Should I Go? How to Decide Whether to Bug Out or Bug In During an Emergency