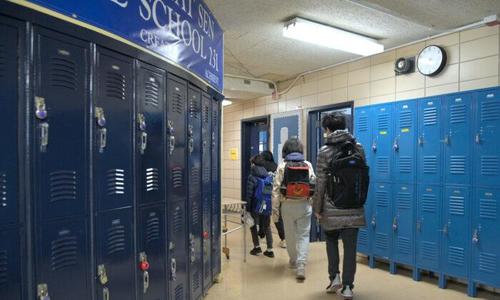 An analysis found that a significant number of Baltimore high school students earned below a “D” grade point average during the first three quarters of the 2020–2021 school year.

WBFF’s Project Baltimore’s analysis found that during that time period, 41 percent earned a 1.0-grade point average (GPA) or below. That means more than 8,400 students out of Baltimore City Schools’ 20,500 total population are getting grades below a “D” overall.

The analysis found that 21 percent of city high school students obtained a 3.0 or better GPA—or a “B” average.

The Epoch Times has reached out to the City of Baltimore and Baltimore City Schools for comment.

The school district appeared to blame the COVID-19 pandemic on the reason for the poor student performance.

“Consistent with the experience of many school districts across the country, the COVID-19 pandemic created significant disruptions to student learning. As early as the summer of 2020, City Schools identified large numbers of students with decreases in their grade point averages and classroom performance when compared to past performances,” Baltimore City Schools said in a statement to Fox News and other outlets.

The statement added that “city Schools is providing students with a variety of opportunities to acquire the unfinished learning they lost” and “each student’s progress will be assessed, and an action plan will be developed to complete any unfinished learning,” which will “guide families and teachers in helping students get back on track.”

Across the United States, a number of public schools struggled to implement online learning for students during COVID-19-related lockdowns. Some districts saw an increased rate of failure and an increase in absences from classes.

During the previous year, nearby Anne Arundel County in Maryland saw failure rates more than double from 3 percent to 7 percent, according to data obtained by the Baltimore Sun.

But Jovani Patterson, who ran for City Council president last year, said that the school district absorbs a considerable amount of funding but doesn’t deliver results.

“We don’t see much change. Our schools outspend 97 percent of other major school districts,” he told the station.

“They don’t care, man. They come from the same environment,” Patterson said of city officials and what he described as an inability to deliver positive results for students. The Baltimore City Council Leader, Nick Mosby, and other officials are “a product of Baltimore City schools,” he added. “But then when you bring this [analysis] to them, they don’t care. They don’t care at all. You have to raise the standard … Everyone should be speaking out about this.”

Another Lost Decade Ahead? 60/40 ‘Balanced’ Books Suffer Worst Streak Since 2008

More evidence that the US is trying to prolong this war