Parts of Alaska are under tsunami warnings after a 8.2 magnitude earthquake struck off the coast, according to preliminary data from the USGS.

It was likely a thrust quake of the Pacific tectonic plate sliding north under the North American plate at the Aleutian Trench, according to volcanodiscovery.com.

At the time of writing, there have been four strong aftershocks, including a preliminary M6.2 and M5.9:

A tsunami warning has been issued for parts of the state, according to the U.S. National Tsunami Warning Center.

These include South Alaska and the Alaska Peninsula, from Hinchinbrook Entrance, (90 miles east of Seward) to Unimak Pass, and for the Aleutian Islands, from Unimak Pass (80 miles northeast of Unalaska), to Samalga Pass, Alaska.

Police in Kodiak, the largest town on the island of Kodiak, advised residents to move to high ground, adding that the high school was open as an evacuation location.

A tsunami watch was also issued for Hawaii, according to the NWS Pacific Tsunami Warning Center.

The waves for Hawaii are forecast to be less than 0.3 meters (0.98 feet) above tide level, Hawaii Gov. David Ige said on Twitter:

The level of tsunami danger is being evaluated for other US and Canadian Pacific coasts in North America, according to the NWS.

Seismic and Volcanic activity has been correlated to changes in our sun.

The recent global uptick in earthquakes and volcanic eruptions is likely attributed to the drop-off in solar activity, the increase in coronal holes, a waning magnetosphere, and the influx of Cosmic Rays penetrating silica-rich magma. 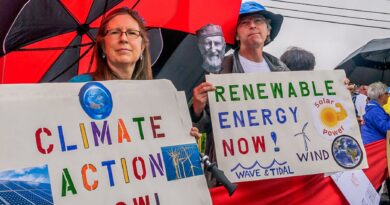 The Climate Cowards And Apocalypse Peddlers

Brace Yourself: IEA Reports Oil Prices Will Have Another Volatile Year