An unusually cold storm system will move into the Pacific Northwest this week, driving temperatures down some 6C-16C below the seasonal average, and bringing a substantial dusting of summer snow to the mountains.

The latest GFS runs (below) show a mass of Arctic air sinking down from Alaska and Canada, starting today.

That mass of “blue” and “purple” will intensify and expand southward and eastward into Thursday:

Where it will then linger well into the weekend:

This is something of ‘summer spanner’ in the AGW works.

The MSM has been milking the Pacific Northwest’s heat for all it’s worth in recent weeks. But now, we get to sit back and enjoy them squirm and obfuscate their way through a record-breaking bout of August cold.

The outlook, released Sunday from the agency’s Climate Prediction Center, confirms that “colder than normal” conditions will impact a large part of the northern Rockies, including Colorado and Utah. Some places in Montana are expected to see highs only in the 40s over the next few days, with lows in the 30s — such readings would threaten all-time August lows.

And you best take heed when the likes of NOAA are telling you it’s going to get cold. The agency has a provable warm-bias. We all recall their swing and a miss for February, 2021: “A warmer than average month,” was the agency’s official prediction; but in reality, North America suffered its coldest February since the 1980s which in turn led to the deaths of 702 people in Texas alone–many of them likely unprepared due to the false, warm-mongering forecast.

Below are shots North Central Alaska on Aug 17, courtesy of @AndySteinWx on Twitter:

That high-latitude snow will track southward with the cold.

Noteworthy totals are forecast to develop across the higher elevations of Montana, Wyoming and Colorado–and while the snow levels are expected to remain high, such widespread summer accumulations are not common.

Below is the latest ‘GFS Total Snowfall’ run.

Note also the healthy early-season totals building above the border, in British Columbia.

This looks to be more than just a dusting.

We will likely be measuring totals in the inches across the peaks.

The post Fall-Like Arctic Front to Grip much of North America: Snow Forecast for Montana, Wyoming, Utah and Colorado appeared first on Electroverse. 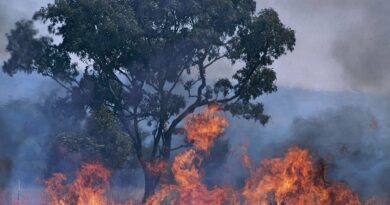