WASHINGTON — In keeping with President Joe Biden’s pledge to withdraw from America’s 20-year war in one of the poorest countries on earth, the U.S. government has yet to present any plan for future relations with Afghanistan, as it is reportedly scrambling to freeze Kabul’s wealth for fears of it falling into the hands of the Taliban.

In the midst of the sudden collapse of Afghanistan’s government and the subsequent return to power of the Taliban this Sunday, the U.S. troop presence at Afghanistan’s Kabul Airport has reportedly increased to 4,500 strong, with a further increase planned to 6,000 in coming days.

Having abandoned its embassy in the Afghan capital and vowing to maintain a presence only at the country’s airport, the U.S. government has severely miscalculated the pace at which the country was destined to fall into Taliban control. The lack of a contingency plan, in the case that such an insurgency was to overwhelm the U.S.-backed government of former President Ashraf Ghani, has led to an embarrassment of the U.S. military and a stark decline in Biden’s approval rating at home.

“Any Central Bank assets the Afghan government have in the United States will not be made available to the Taliban,” said an unnamed U.S. official speaking to The Washington Post. According to that same report, the Biden administration has now frozen the assets of Afghanistan, the vast majority of which are not held inside of the nation’s own borders.

Some 80% of Afghanistan’s annual budget is currently funded by the United States and other foreign governments, which may well end now that the Taliban have seized control of the country. In alignment with sanctions in place against the Taliban and Executive Order 13224, any dealings with the Taliban are prohibited. Executive Order 13224 was signed by then-President George W. Bush in the wake of the September 11 attacks and was said to have been designed to restrict financing to U.S.-designated terrorist organizations. This means that for one of the poorest countries on the planet, it may now be even more difficult to bring in international humanitarian aid at a time when the ongoing refugee crisis is expected to escalate.

Calling Sanctions by Their Name: Rania Khalek on US Mideast Genocide

On May 6, 2019, the UN Human Rights Council — commenting on the implementation of sanctions against Iran, Venezuela and Cuba — stated that “the use of economic sanctions [by the U.S. government] for political purposes violates human rights and the norms of international behaviour.” It also warned that such actions threaten creation of “man-made humanitarian catastrophes of unprecedented proportions”.

Over the past two decades, successive U.S. administrations have fueled their nation-building project in Afghanistan, working to build an Afghan military 300,000 strong, armed with some of the latest in U.S. military equipment. Between 2001 and 2019, the U.S. government spent $133 billion on its nation-building efforts in Afghanistan.

Taliban talking the talk as U.S. trips the trip

The Taliban now seems to be taking a more pragmatic approach to politics, showing themselves to be more calculated than they previously were, yet skepticism is still high as to whether the group will carry through with pledges to maintain peace and to respect the rights of women.

Earlier this February, Taliban officials made a surprise visit to neighboring Turkmenistan, a country with the planet’s fourth-largest natural gas reserves, where they made the pledge to support the construction of a gas pipeline through their country and to provide stability. Further plans for railway infrastructure in Afghanistan were also discussed.

As the U.S. government is left scrambling, watching its 2.2 trillion dollar war effort turn out to have meant nothing and seeking to pick up the pieces, it is now behaving very dangerously. Having utilized the U.S. Air Force against the Taliban during the past months, now holding back the wealth of Afghanistan, the U.S. is taking a much more aggressive approach than that of its rivals.

China has stated that it is ready for “friendly relations” with the Taliban, while Russia and Pakistan have also voiced similar sentiments. The U.S. may not have a physical presence inside of Afghanistan in the future, but the fear is that its economic sanctions may end up being more deadly than its armed forces.

Feature photo | Students paint messages in solidarity with the people of Afghanistan on a pavement in Mumbai, Aug.17, 2021. Rajanish Kakade | AP

Robert Inlakesh is a political analyst, journalist and documentary filmmaker currently based in London, UK. He has reported from and lived in the occupied Palestinian territories and hosts Press TV’s show ‘Palestine Files’. Director of ‘Steal of the Century: Trump’s Palestine-Israel Catastrophe’. Follow him on Twitter @falasteen47 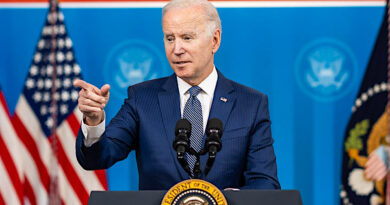