Vice Adm. John G. Hannink of the U.S. Navy Judge Advocate General’s Corps tore into Bill Gates at the start of a military tribunal that is expected to last several days. At 9:00 a.m. Monday morning, military police escorted Gates from GITMO’s Camp Delta detention block to the courtroom where Hannink and a 3-officer panel awaited Gates’ arrival. At Gates’ side was David Baluarte, an attorney who had once worked for the Center for Justice and International Law and in 2009 had lobbied for the release of Jihadists detained at Guantanamo Bay.

Vice Adm. Hannink’s first act consisted of linking Gates to Jeffrey Epstein and linking them to a child trafficking ring that Gates had run from a subterranean bunker beneath a ranch he had owned in Wyoming. He presented to the panel videos and images obtained from laptops and SD cards the military had seized during raids on several Gates-owned properties across the nation.

One disturbing video showed Gates and Epstein hatching plots on how to kidnap children from third-world nations and sell them to the highest bidders.

“El Salvador is ripe for the picking,” Bill Gates said on the video.

“No. The market for dark-skinned children is slim right now. Not even Hillary wants those. Caucasian or Caucasian-looking nets the most money,” Epstein said.

On the video, Bill Gates chuckled and smirked. “We should just get them here, like we’ve done before. It’s not like anyone can touch us. I’ve made sure we’re insulated.”

Vice Adm. Hannink addressed Gates’ lawyer: “Does your client have an answer for this?”

Gates leaned over and whispered in David Baluarte’s ear.

“It’s all roleplay. Yes, Bill and Jeffrey were friends. Jeffrey Epstein had many friends, and Bill was just one of them. And this video is nothing more than two men engaged in some roleplay that the military has exaggerated into some grand conspiracy to frame my client for crimes he never committed. Bill Gates is one of the smartest men on the planet. If he were planning to abduct children, do you really think he’d video tape his plans?” Baluarte said.

“Your client is also a narcissist and a megalomaniac,” Rear Adm. Hannink responded, and offered the panel a printout of a spreadsheet the military had obtained from one of Gates’ computers and subsequently deciphered.

The spreadsheet held 65 names. The 65 names belonged to children who had inexplicably gone missing while visiting national parks across the nation. Beside each name was a dollar amount, ranging from $250,000 to $3,000,000, and the age, hair and eye color of each child. The youngest was 4 at the presumed time of abduction.

David Baluarte objected: “It’s no secret that children have disappeared in the national park system. Mr. Gates is a humanitarian and has concern for child welfare, and do you really think my client, certainly no outdoor enthusiast, went traipsing around foreboding environments in search of children to steal.”

“If he was on some noble, humanitarian mission, then why the dollar assignment for each child? And, no, I certainly don’t think Gates himself went hiking around the Grand Tetons or Yosemite. But someone did on his behalf,” Vice Adm. Hannink said.

He pressed a button on a remote control in his hand and a large video screen lowered from a recessed opening in the ceiling. A moment later, Gates’ estranged ex-wife, Melinda, appeared on the screen, gave her name and relationship to the accused, and admitted that although she had received leniency in exchange for testimony, she would tell the truth and nothing but the truth.

A typically soft-spoken Gates suddenly arose from his chair and shook his shackled wrists at the screen.

“You gold-digging bitch,” Gates blurted. “You can’t believe anything this woman says.”

Vice Adm. Hannink instructed Baluarte to restrain his client, lest the military police do it for him.

“Melinda Ann French,” Vice Adm. Hannink said, addressing Melinda by her maiden name, “did you, on 14 August 2017, hear your former husband, Bill Gates, brag that he had had children abducted both in the U.S. and abroad?”

She replied in the affirmative. “And several other times,” she added.

“Did her overtly reveal this to you?” Vice Adm. Hannink asked.

“He did. He would laugh and grin and with that sinister giggle of his allude to the number of children he and his associates had abducted from their families,” she replied.

“And did he ever give a figure?”

“No, but it was clearly in the hundreds, if not thousands,” Melinda said.

“And you never thought to come forward with this information?” Vice Adm. Hannink said.

“I lived a prosperous life, a life he threatened to take if I ever divulged his secret life. He said he’d have me killed,” Melinda said. 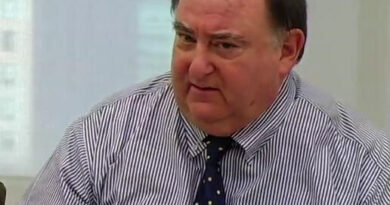