This post was shared from the reclaimthenet.org's RSS feed

Bitcoin, a poster child and possibly a blueprint for all kinds of technology-based decentralization, is unsurprisingly not particularly popular with Big Tech and its decidedly centralized model.

And so YouTube first decided to delete the channel of Anthony Pompliano, an investor and a well known figure in the Bitcoin community, saying the content on there was “harmful and dangerous” – to then quickly restore it without any explanation.

Pompliano, who is also co-founder of Morgan Creek Digital and a podcaster, but who ironically is yet to embrace decentralzed platforms, announced this on Twitter on Monday, saying that YouTube tried to deplatform him by permanently removing his crypto-oriented channel with about a quarter million subscribers. YouTube cited illegal activity and incitement of users to violate the giant platform’s rules.

The actual reason was an interview with another popular Bitcoin scene figure, Plan B.

But about two hours later, the channel was reinstated “with zero explanation from the company,” Pompliano tweeted – and linked to the interview that YouTube tried to suppress.

Pompliano, who has over one million followers on Twitter, was luckier than most deplatformed YouTube creators since he is “visible” enough for YouTube to reconsider their censorship ways. Eventually it decided against yet another showdown with crypto content, which is often marked as harmful and dangerous and removed.

The incident did not go unnoticed by politicians, like Senator Cynthia Lummis, who saw the attempt of deplatforming Pompliano as “yet another canary in the coal mine,” seemingly implying that major social platforms are testing the limits to which they can push censorship.

Lummis also wondered how to make access to information “flourish” and make her fellow lawmakers back solutions that will protect freedom of speech and prove to be censorship resistant.

Congressman Warren Davidson also reacted, blasting Big Tech for having “authoritarian impulses” that are fast spreading, but also referencing the ills of centralization as opposed to distributed ledger free speech platforms, that are in his opinion necessary as alternatives to YouTube, Twitter, and others. 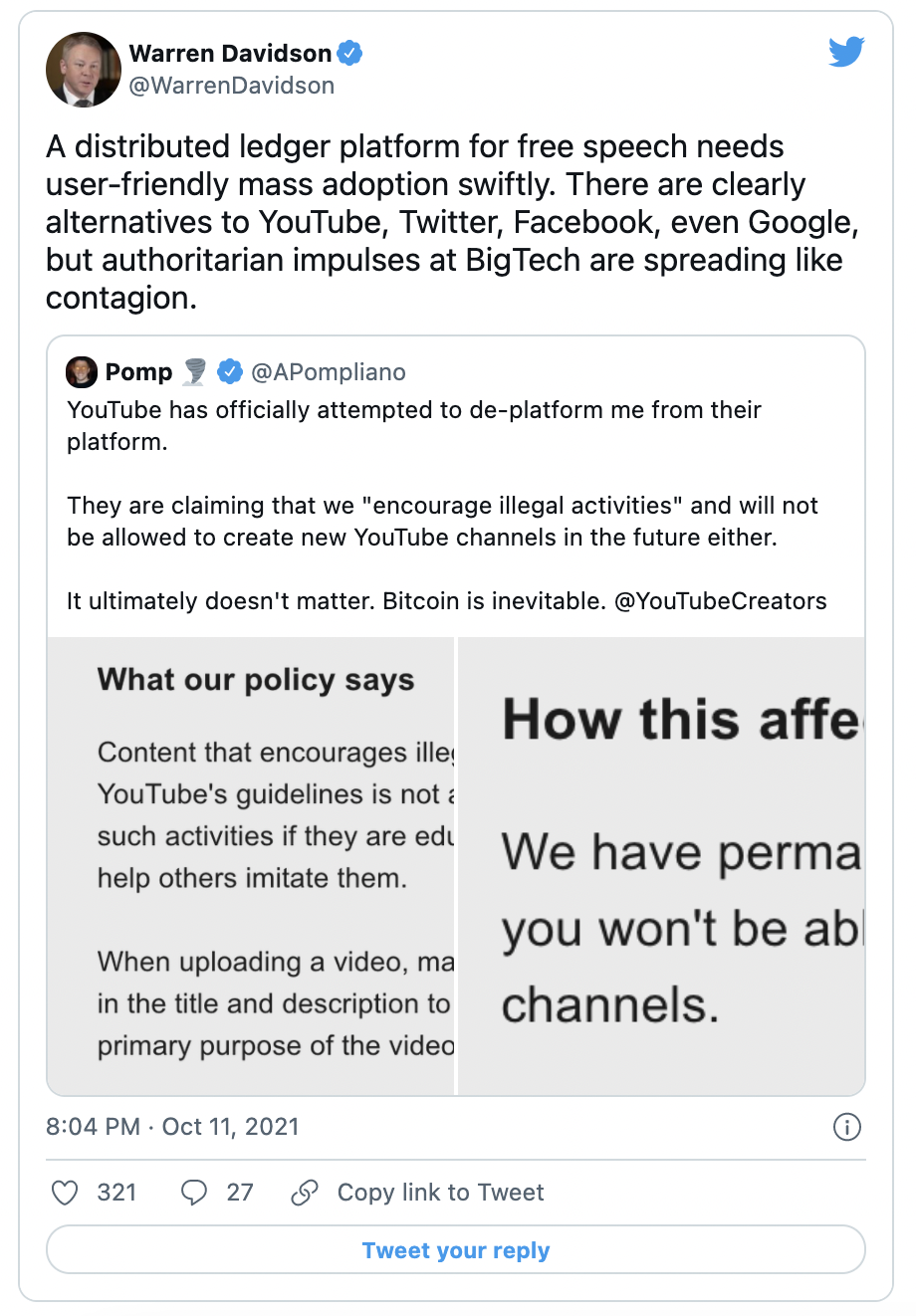 Davidson would also like these platforms to be user-friendly in order to see mass adoption. Mass adoption, of course, is the key condition for others to compete with these established and entrenched behemoths.