There have also been rumors circulating on the Internet lately that Pfizer’s CEO, Albert Bourla, had been arrested by the FBI for fraud, although it appears that the story originated from a single source and was copied from there.

Well Mr. Bourla appeared in a livestream interview today with the President and CEO of the Atlantic Council, Frederick Kemp. The Atlantic Council is set to award Bourla with a “Distinguished Leadership Award” tomorrow, November, 10, 2021.

It starts out with discussing Bourla’s family and past, portraying him as a “holocaust survivor,” and a poor Jew who grew up in Greece and beat all the odds to become a successful scientist and business leader.

The issue of Albert Bourla being a “Jew” in a very high position of power, is another subject and not part of this article. But I want to again remind our readers that I am still getting emails every week from people criticizing me for either being “anti-semitic,” or from the other side from those who believe I am not doing enough to expose the Satanic Jews, and neither group is correct.

Earlier this year I spent about 35 hours compiling months of research on the word “Jew” and published an article on this topic so that there could be no doubt what my position is on the “Jews.” So if you want to email me and complain about something related to “Jews,” you need to read that article first and reference it when you email me.

Because if you have not read this article, and are still lumping all “Jews” as just one group, than you simply are not intelligent enough to even carry on a conversation with me on this topic.

In the corporate media, CNBC ran a brief mention of the interview with this headline:

with the following bullet points:

This was quickly picked up by many in the Alternative Media, which seemed to simply republish what CNBC wrote.

I went and found the 1 hour interview online at the Atlantic Council’s YouTube channel, and watched the entire interview.

The CNBC article, and what most in the Alternative Media then reported, is not entirely accurate.

Bourla actually said that there was a group of people out there who were afraid of his vaccine, and they were upset that people were trying to mandate it. He actually called this group: “very good people, decent people.”

But he stated that there was some secret group that the CIA and FBI warned him about, with possibly some foreign country behind them, that was made up of professionals who he claimed were deliberately spreading false information about his product, the COVID-19 “vaccine.”

He is obviously trying to repair his public image and not blame the percentage of the public who refuse to take his shot, but insinuate that they have been manipulated by this “secret” group that he never names.

Of course, such a group does not exist. The misinformation being published about his deadly shot is being spread by his company, and their control over health agencies like the CDC and FDA, and NHS in the UK.

The source information documenting just how deadly and dangerous his product is comes directly from the government-owned databases listing adverse reactions to vaccines, which shows that his “vaccine” has killed and crippled more people than all other non-COVID vaccines listed in these databases over the past 30 years combined.

That is not “misinformation,” but factual data.

But for those who did not take the time to look up and watch the entire 55 minute interview, you probably missed something even more explosive that Bourla said besides blaming some secret group for spreading “fake news.”

Frederick Kemp asked him what other medical products Pfizer was working on that incorporated mRNA technology, since in his view the mRNA COVID-19 shots had been so “successful.”

He also clearly refers to mRNA vaccines as “gene editing.”

These Globalists are so entrenched in eugenics thinking, that I don’t think he even realized the significance of what he was saying.

Who gets to decide what a “mistake” is in one’s DNA when they are born??

I have extracted this part from the interview, along with his comments on “fake news” and “misinformation,” and it is just over 3 minutes long.

When Frederick Kemp addresses the issue of “conspiracy theories” and “misinformation” with Bourla, take note of how he seemed to slip up in his question when he asked: “How damaging was this (fake news) to us?” when he obviously meant to say “to you” (referring to Bourla and Pfizer.)

This is on our Rumble and Bitchute channels.

You can watch the entire interview on YouTube. It only has a few hundred views at the time I am writing this.

2,433 Dead Babies in VAERS as Another Study Shows mRNA Shots Not Safe for Pregnant Women

The post Pfizer CEO Calls mRNA Technology “Gene Editing” and Wants to Use the Technology to “Cure” People “Born with a Mistake in Their DNA Code” first appeared on Health Impact News. 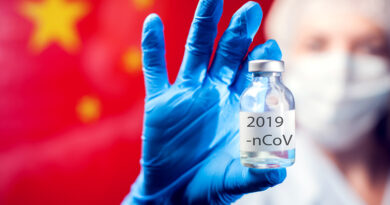 Can These Foods Help Combat COVID?